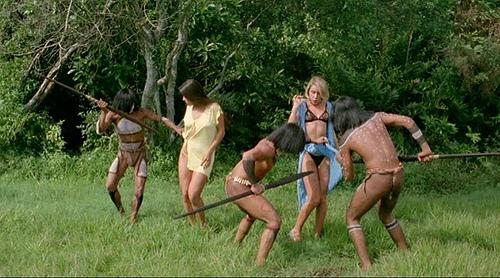 Italian Cannibal movies on the whole are deserving of their notorious reputations. Often they are mash-ups of ingenuity, laughable portrayals of jungle savages and heinous animal torture, indeed they seem to have a bad after taste for any kind of palette.

In most cases the gore is still sufficient to satisfy modern day guts-nuts, but the other sensibilities on display offend both morally and qualitatively. Ruggero Deodato’s “Cannibal Holocaust” is generally regarded as the masterpiece of the subgenre; it is brutal and deeply impressive. But like most of its cousins in the genre, it isn’t a whole lotta fun. This seems a bit criminal given the common shooting circumstances shared by most of these films. To send a skeleton crew of spaghetti splatterists into Equatorial forests with actresses clad in disintegrating wardrobe and then produce only the most dour, serious-minded films, C’mon. We’re talking about the 70’s and 80’s in South America. I’m pretty sure the waters of the Amazon were like 40% cocaine at the time. Fortunately for lovers of Italian exploitation at least one swarthy schlock-doctor gave into the fun that was available.

Director Massimo Tarantini took Swayze-facsimile Michael Sopkiw and a small stable of fit, young actresses into the Amazon basin and made “Massacre in Dinosaur Valley”. Sopkiw plays ass-hat anthropologist Kevin Hall, a bone-hunter scouring the soggy jungles of Brazil for pre-historic curios. Hall and a collection of oddball city-folk take an S.S. Minnow-styled flight over Dinosaur Valley, a cultural preserve for the Cannibalistic Aguaro Indians. The plane goes down, the group is chased by the cannibals and with only one exception the ugly people die first. Fear not, that lone exception has already disrobed twice and had sex once by the time she kicks the bucket. The group presses on and thanks to Hall’s unconvincing mixture of daring and ingenuity they outwit the Aguaro in their own hood. Of course only Kevin, the nubile Eva and shapely, pin-up Belinda manage to survive the gauntlet. At this point in the film every heterosexual male in the audience feels well taken care of by Tarantini as a screenwriter. The trio runs across an evil emerald mining slaver named China (pronounced Chee-na or in many cases Cheeee-naaaa!) Once again Hall and the helpless damsels must fight their way to freedom. At this point in the script every woman without a lively sense of humor feels comprehensively insulted by Tarantini as director/screenwriter.

So how does old Massimo bring the fun into the cannibal film oeuvre? Rape, insensitive and inaccurate portrayals of indigenous peoples, chauvinism, homophobia and rampant female nudity is the short answer. No, you’re right, that does sound like a piss poor formula for fun. Well, all I can tell you is that everything is in the execution, or lack of it. Questionable content aside “Massacre in Dinosaur Valley” is intended to be a laugh. Where intention fumbles, pure ineptitude picks up the ball and high-steps across the goal line. Здесь вы можете купить диплом по выгодной цене - по всем городам России, анонимно.

Sopkiw is Bruce Campbell-lite; kind of like Ash before BC hit his “Army of Darkness” stride. His turn as Kevin Hall is funny even when it ain’t supposed to be and for all his directorial failings here, Tarantini knows he has to show Hall as a horse’s pahtoot for the movie to go. And go it does, never lingering long enough to allow the audience to take it seriously or to really get tripped up on the inanity of the whole exercise. Sure you will immediately spot the cheap 80’s monster hand purchased at a low-rent costume store and taped to the witch doctor’s arm. But you won’t care once that goofy rubber claw is tracing bloody lines down Belinda’s bare torso. The barrage of bad elements in the film is so incessant and mixed so freely with barely motivated nudity that it challenges you to not enjoy it.

For those of you who can appreciate a director who knows what he has and doesn’t have and how to exploit that, this movie is a little gem from another era. A fossil if you will. No, it’s not the femur from Giganotosaurus, more like a broken dinosaur egg. But if you like the Italian fromaggio school of filmmaking this movie may actually demand multiple viewings. There really is no good reason to dislike this film, there I said it, that’s how I really feel. If you can’t have fun with this type of thing I feel bad for you, or in the words Kevin Hall of the Boston Institute of Paleontology, “You know what you are? You’re a fat, smelly, evil bastard.”