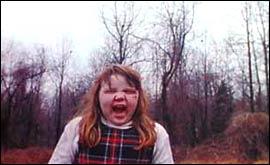 Pop quiz, hotshot: take “The Ring” and replace the Pacific Northwest setting with the Maryland backwoods of “The Blair Witch Project”. Then change the Naomi Watts character from a journalist investigating a rash of mysterious deaths to an old man in his underwear looking for his cat. Got that? Now slash the film’s budget to a paltry $6,000. Oh, and while you’re at it, outside of a few key scenes, make the entire film without any dialogue and tell the whole story through images and ambient sounds. Is the final product (a) a bold artistic triumph, (b) admirably ambitious but ultimately flawed, or (c) boring and a tad pretentious? There’s an argument to be made for all three answers but love it or hate it, you can’t deny the originality that went into making “Soft for Digging”.

The film follows an old man, identified as Virgil Manoven in the chapter-dividing title cards, on a typical morning as he fixes his breakfast and sets out to find his cat which clearly has the habit of running off and hiding in the thick woods outside his cabin. The old man, clad only in long johns and a bathrobe, finds something much more sinister than the cat. He sees a man, a little girl and a dead dog. Watching the trio, he expects to see the burial of a pet but witnesses a murder instead. He calls the authorities but they are unable to find a body . As time goes on he is tormented by visions of the little girl he saw murdered until his search leads him to a nearby orphanage where he learns the truth about the girl and her death.

It’s not a particularly ground-breaking story but this is very much a case of atmosphere and style taking precedence over concept. It’s not the tale so much as how it’s told. Time is marked in the film by images: the candy cane reindeer which disappear one by one as they are eaten, the constant, yet subtly changing appearance of the local paper-delivery girl, the repeated morning ritual of the old man and his never-ending search for his cat. There are a number of quiet, small moments that give us a peek into the quiet, small life of this old man in the woods without resorting to expository dialogue. These charming, often funny moments are where the film shines. Unfortunately, these moments are often sandwiched between long tension-free scenes of people walking from one place to another or doing not much of anything interesting which gives the audience plenty of time to forget how clever the film is and start to wonder when something is going to happen.

Just the mention of a feature-length dialogue-free movie is sure to turn off lots of people and that’s probably not a bad thing. If that sounds mind-numbingly dull to you there’s a strong chance that you won’t enjoy this movie. As a matter of fact, even if it doesn’t sound mind-numbingly dull to you, there’s still a strong chance that once the novelty of the film’s central gimmick wears off you’ll find yourself wishing the film would pick up the pace a little bit. In many ways, that’s the dirty little secret of “Soft for Digging” – while director JT Petty deserves full praise for telling such a rich, compelling story without using words, this is essentially a slam dunk of a short film padded out to 74 minutes. With a little judicious trimming the film could be improved immensely. Juggling acts are interesting to watch but there comes a point where even the most clever act becomes mundane.

“Soft for Digging” is an odd duck of a movie that’s pretty much guaranteed to either be over-praised or under-appreciated. Some will recognize the artistry that has gone into crafting a fully-fleshed story with only images and the barest of dialogue and will laud the film as an uncompromising artistic achievement that fearlessly plays with the foundations of pure storytelling. Others will see a movie where nothing much happens and nobody says anything and will instantly lose all interest in the film. It’s a shame that not everyone will appreciate the charms of this film, but you’d be hard-pressed to get most escapist film-watchers to give this movie a fair shake. Both sides have their points but both lose sight of what the film ultimately is: a calling-card by a first-time director pushing himself into uncharted territory. This is a growing experience caught on film and it’s almost certain that JT Petty came out of it as a much stronger director than he was when he started it. For all its flaws, “Soft for Digging” is a major accomplishment and is a very rewarding watch for those with the patience to put up with the sometimes overly-ambitious pretensions of a talented, rookie director.