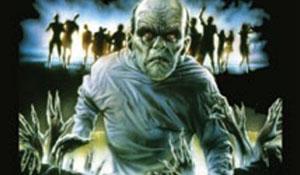 Dr. Ramzi is a surgeon at the state mental hospital with a touch of the crazy. He has grand dreams that may have a dark side and those dreams involve absconding with the mental patients and cutting them open to check out the inner workings of their brains. It turns out, there was a doctor with morals still at the mental ward, and Dr. Swan didn't want much to do with Ramzi's experiments. So, he shot him in the head and left him in his underground pit of dead people. Cut to 20 years later. Jane Doe is found wandering the country side and can't remember who she is; so the courts turn her over to the mental hospital. As she begins to work with Dr. Swan, more and more of her past comes to light, as does her repressed dreams of a zombie Dr. Ramzi. Before long the dead rise along with Ramzi and all hell shambles loose in pursuit of Jane Doe.

"Dead Pit" rolled in at the tail end the 80's horror craze, still hanging on desperately to the staples of the era. Scantily clad women, bad hairstyles, gratuitous gore and convoluted stories all make their appearances. It's these appearances that make this movie watchable and helps us to cling on to memories of better days. For starters, Cheryl Lawson spends a good 75% of the movie in her underwear. In fact, there's even a nice bit of fan service as Ms. Lawson has a nightmare that consists of her in said white underwear chained to a wall being hosed down with a fire hose.

Other than Ms. Lawson however, there's not a lot there in the acting department. Jeremy Slate makes a mostly believable appearance as Dr. Swan, a doctor who has turned to the bottle to cope with what he did and acts like a jump man guilty of many crimes. Never mind the fact that the he put an end to the psychopathic surgeon who was killing off patients. Stephen Gregory Foster, most notable to MST3K fans from "Quest of the Delta Knights" shows up as a slightly smarmy Brit who happens to be a trained demolitions expert. As I said, he's a bit hammy but over all he's okay. That's the key problem to the cast for "Dead Pit"; they're merely okay.

As far as plots go for 80's horror, many of them were formulaic. "Dead Pit" manages to change things up a bit and leave you guessing from time to time, but eventually it all boils down to another zombie movie. Flirting with Jane Doe's back story fighting through her amnesia was a nice touch. The cause of the zombies itself was okay as well. The evil Dr. Ramzi makes for a nice villain although he's highly underused. They went through great lengths to set up his back story of grizzly experiments, however when the time comes for him to take center stage, he is stands about stiffly and makes faces. There are only a few times that we get to see him in full on creep out mode. If we'd seen more of him it would have been far more entertaining.

"Dead Pit" is a decidedly mediocre movie. It's not horrible by any means, yet it fails to be overly exciting. Perhaps a heavy dose of editing could have helped tighten things up; ultimately it felt as though the movie was about thirty minutes too long. But hey, we got to see a woman rinsed down with a fire hose, right?