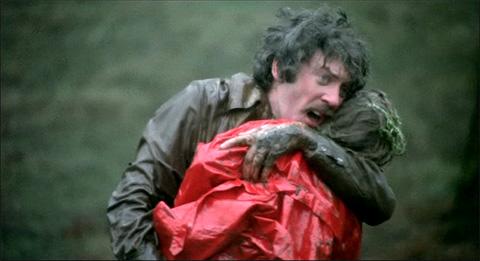 **Editor's Note: Angelo is another new addition to our writers team, please welcome him in the comments!**

I have a love/hate relationship with Italian horror ﬁlms. On the one hand, they are some of the most stylish horror flicks around. Vivid colors, unique and memorable soundtracks, over-the-top ridiculous gore, beautiful women, interesting use of recurring motifs and symbolism, are all staples of the genre. However, theyʼre also, in general, incredibly poorly paced. The question usually is, are they stylish enough that the ﬁlmmaking keeps me entertained while the plot is dragging? Unfortunately for "Donʼt Look Now", the answer to that question is no. The ﬁlm, while having an interesting plot, has some serious pacing issues that detract from the overall experience and prevents it from being the classic that it could be.

"Don't Look Now" stars Donald Sutherland and Julie Christie as John and Laura Baxter, a married couple whose young daughter tragically dies after falling into a creek in their yard and drowning. After the death, Johnʼs work takes the family to Venice as he oversees the restoration of a classic cathedral. While at dinner one night, Laura encounters a pair of sisters in the bathroom. One of the sisters happens to be a blind clairvoyant, who tells Laura that their dead daughter is at peace. Laura faints upon returning to the table and later revisits the clairvoyant in an attempt to contact her dead daughter. During this, she warns Laura that John is in trouble. Meanwhile, a serial killer is stalking the streets of Venice at night, killing innocents and disposing of the bodies in the canals, and John begins to have visions of his own involving his dead daughter and her iconic red raincoat.

I have to admit, the plot here is pretty interesting. The ﬁlm manages to keep the viewer strung along just enough that youʼll ﬁnd yourself wanting to ﬁnd out more about the sisters, why John is seeing his dead daughter and whatʼs going on with all the dead bodies. The problem is, this plot isnʼt fully established until around the hour and ﬁfteen minute mark. There are numerous unnecessary scenes that just serve to slow down the ﬁlm and bore the viewer. We donʼt need to see multiple shots of John assisting in the restoration of the church or talking to priests, we know that heʼs in Venice to restore a church. Weʼve been told, we donʼt need to be told and then see it three times. We donʼt need to see an awkwardly long and explicit sex scene between Donald Sutherland and Julie Christie, itʼs out of place and completely not related to anything going on in the ﬁlm. We donʼt need to see the two argue about praying at a church as it never comes up again and means nothing in the grand scheme of the movie.

Itʼs so bad, that thereʼs an expository scene between John and the police at the hour and ﬁfteen minute mark where Johnʼs character brings the police up to speed in excruciating detail, almost as if the ﬁlmmakers knew that viewers would be drifting in and out of attention and might need to be ﬁlled in as well. Fortunately enough, from this point on the ﬁlm is moving in the right direction and at the right speed and ﬁnishes strongly. Unfortunately, not everyoneʼs going to get to that scene and brush this ﬁlm off as bloated garbage, when it actually picks up pretty substantially towards the end.

Venice is beautiful and the ﬁlm really captures the beauty of the decaying city ﬂoating on illuminated water. There are multiple strong motifs running through the ﬁlm which is something that I really miss in modern movies. Pay attention to the color red and broken glass. They come up many times and play an important role in the storytelling.

If youʼre anything like me, you know of this movie simply because of Bravoʼs "100 Scariest Movie Moments" special from a few years back. Despite my interest in genre ﬁlms, I had never heard of this ﬁlm until that special, and after seeing it, I think I know why. Despite having some very strong parts, the middle hour drags to a point where I donʼt think most casual viewers will stick along. Even some big genre fans will have issues with the pacing and that shouldnʼt be ignored. That said, if youʼre a fan of Italian horror ﬁlms and are aware of the the negative aspects of this ﬁlm, there is a payoff for slogging through the middle portion that may be worthwhile for some viewers.

If nothing else, you get to watch Donald Sutherland have awkward sex with a woman thatʼs easily ten times out of his league. For a solid ten minutes. So... there's always that.