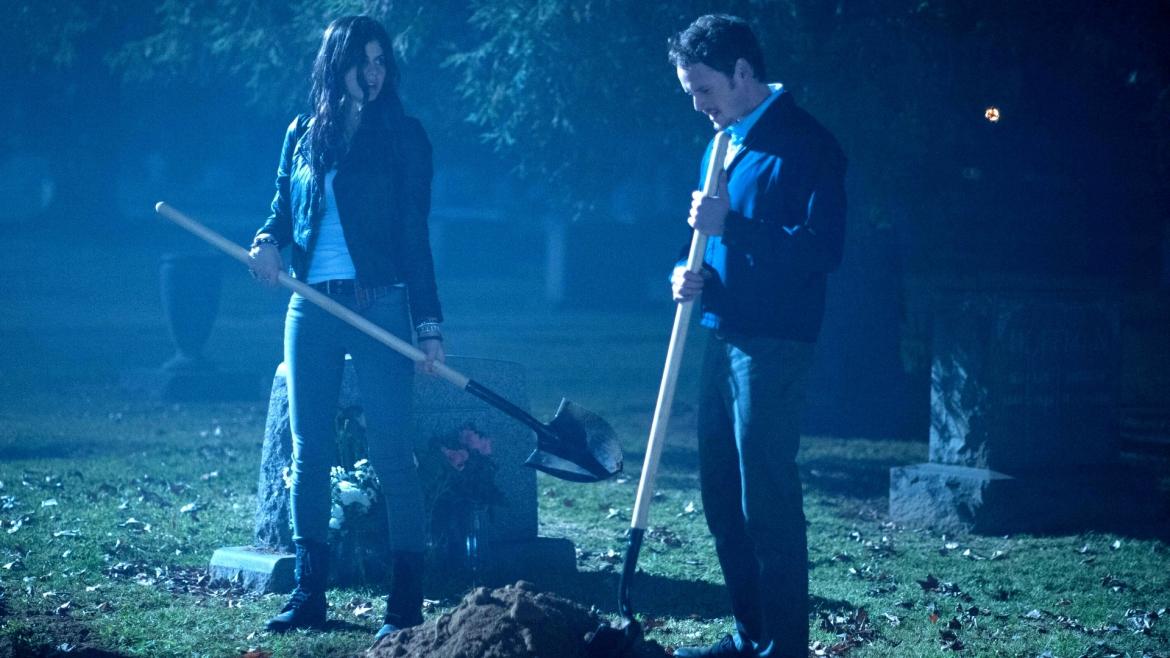 Anton Yelchin stars as Max, a life-long horror aficionado who works in a store specializing in slutty Halloween costumes and high-powered occult items. Max’s girlfriend is an eco-blogger named Evelyn (Ashley Greene) who has some jealousy and boundary issues. Her biggest failing though is that she’s not into horror. One day, Evelyn goes too far and redecorates Max’s apartment, leading him to decide to break up with her. Before he can, she’s run over by a bus. An indeterminable amount of time passes and then Max starts to fall for Olivia (Alexandra Daddario), who is Evelyn’s opposite in nearly every way. Things are great there until Evelyn returns as a zombie-ish creature. See, earlier in the film, Max and Evelyn had unknowingly promised to stay together forever in the presence of a cursed and very literal demon statue. This leaves Max in the awkward spot of having to try to re-kill his old super-attractive girlfriend so he can move on with his new one.

Here’s all you need to know about the comedic aspirations of Burying the Ex. One of the film’s biggest comedy set pieces occurs just after Max has discovered the reanimated Evelyn. She’s hanging out in his apartment when, in true hacky-sitcom style, Olivia shows up. Max is then forced to try to keep each of them from realizing the other is there.

Outside of that sequence – and a pair of vomit gags – the movie relies heavily on Travis (Oliver Cooper), the stereotypical inappropriate and “wacky” best friend (in this case half-brother) character, to supply the funny. This type of character can go south very quickly without a deft touch from the writer, or a big name actor who audiences will be eager to laugh along with filling the role. Neither of those things are at play here and Travis winds up contributing little to the cause.

In terms of the film’s horror elements, the scope of Evelyn’s zombie powers are never made clear. Spoiler alert: She’s completely invincible until she’s suddenly and inexplicably not. Transforming zombies from shambling husks into thoughtful, human characters is fine. It worked great in Warm Bodies. However, if you’re going to deviate from the established rules of a subgenre, you’re going to need to lay some new ones if you want your story to feel like it’s following a logical progression.

The best thing that can be said about Burying the Ex is that it’s paced well and even though it’s not funny, it’s never boring. Maybe the collective charisma of Yelchin, Daddario and Greene helps it get by. Or maybe it stems from trying to figure out the movie’s take on the zombie model. That only works until you realize the movie itself doesn’t understand its take on the zombie model.

If vomit gags and sitcom-love triangles aren’t your cup of tea, there are certainly better horror comedies to invest your time in. However, if you happen to be a Joe Dante or an Ashley Greene completest, Burying the Ex isn’t offensively bad. It’s just a forgettable entry on the résumés of some familiar names.