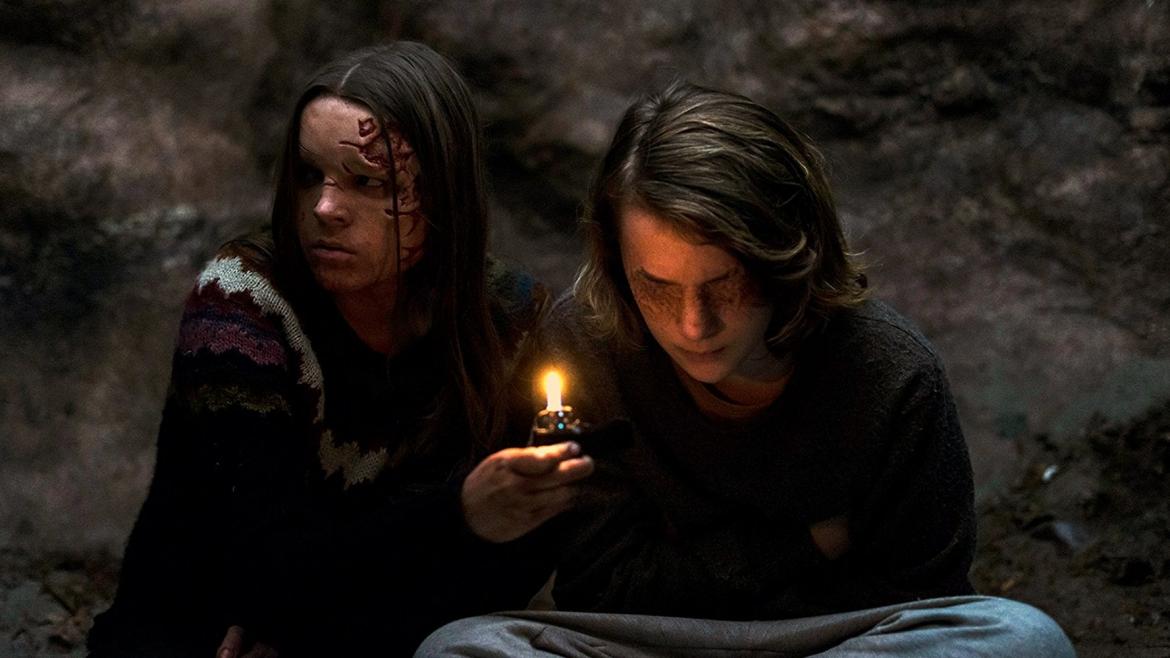 The Dark is a pseudo fairy tale told through a horror lens to highlight how the abused can be revitalized with powerful, personal connection. In the process, writer/director Justin P. Lange cleverly reverses the perspective of "monster in the woods" stories to deliver something new to the genre without entirely knocking it out of the park.

The primordial woods of the film are known as "Devil's Den." The area is said to be haunted by a creature so fierce that locals dare not enter. However, when a wanted man wanders in he finds first hand that the stories are true as he's attacked and killed by an undead teenager, Mina (Nadia Alexander). Mina, a victim of horrible abuse, is guarding an origin that left her to stalk the woods feeding on trespassers. After dispatching the man, Mina finds Alex (Toby Nichols), a teenage boy hidden in the criminal's vehicle. Alex's eyes have been burned shut and he too is damaged by unthinkable abuse at the hands of his captor. As victims of past trauma, the two bond slowly as they again learn to trust someone. But, an increase in attention to the woods in the search for Alex threatens to disrupt their unconventional healing process.

Lange's debut paints a portrait of abuse and healing in broad strokes. As such, the images are perhaps more distorted than originally intended. As characters Alex and Mina have definitive outlines, but the finer details are a tad obscured leaving the audience to read between the lines. Some of this is because Lange wants to have his cake and eat it too, blending weighty material such as themes of abuse with genre thrills. Mina often goes on the defensive to protect her small corner of the woods, becoming the predator herself. These are welcome diversions from the close quarter bonding between Mina and Alex but often highlight some of the film's lesser qualities.

Despite the film feeling light in stretches, Lange seems adept at invoking tragedy and the two leads have no shortage of uncomfortable past to unpack. The Dark often works in many of the same ways as Tomas Alfredson's Let the Right One In, focusing on the burgeoning connection between the young leads while injecting an animalistic threat at its center. Where it diverges is the overall nature of the central relationship as Lange's film wants to promote the healing power of love and it's ability to mend even the most damaged. While the wounds may never fully heal, Mia and Alex's relationship offers them a chance to let go of the part of themselves that's keeping them from moving on.

The Dark is an impressive feature from a bright talent that like many debuts displays some rough edges. Lange shows just enough focus and finesse to elevate the film's heightened genre aspirations. In the realm of horror fairy tales, The Dark takes its bloody axe and carves its own slightly unrefined path within the niche.