The Night of the Hunter (Movie Review) 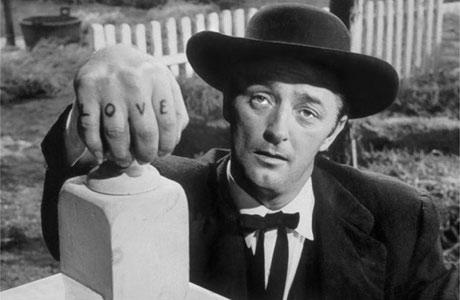 During the Great Depression a desperate man murders two people and steals $10,000 from a bank so he can take care of his children. He hides the money where only his kids can find it, and then is executed later in prison. While he is awaiting his hanging he's forced to bunk with a deranged preacher who sees the man’s hidden money as an opportunity for himself. After he gets out of prison a few months later he convinces the man’s widow to marry him, and the preacher soon tricks the children into revealing that they know where the hidden cash is, and he lets it be known that he'll stop at nothing to find it. Terrified that they’ll be killed, the children get in a tiny rowboat and make their way down river; trying to get as far away as they possibly can.

At first I was a little surprised that this movie is considered by many people to be a “horror film,” although I don’t think it’s difficult to make the argument that it is. Robert Mitchum’s portrayal of a psychopathic preacher is so menacing that the way he is portrayed in this film puts the majority of today’s horror villains to shame. He’s depicted with the now iconic “love” and “hate” tattoos on his knuckles and uses his hands to show how good and evil are always at war with each other. The character is so dark that he seems to be more of a malevolent spiritual presence than he is a human. The director introduces him to his victims masterfully through the use of light, shadow, and silhouette, which lets the viewer know that he is something much more sinister than just a common killer. As the children flee from him, the preacher has an otherworldly sense of where to find them no matter where they are, just like the killer in a modern slasher film.

The preacher is in a lot of ways a much more complex character than you would expect to see in a film from this era. He’s depicted as being incredibly sexually frustrated but at the same time hates sex because of his religious hang-ups. At one point he is at a burlesque show and clenches his fist, puts it in his pocket and grabs a switch-blade knife which flips out of his pants in an extremely phallic manner. He repeats the gesture again after a very young girl asks him to tell her how pretty she is. He also refuses to have sex with the widow after her marries her because he tells her that she was made to have children and he wouldn't be having sex with her unless it was to procreate. I think from a time period when you would expect everything in a movie to be simple, and you would expect almost every character on film to be one-dimensional, it’s impressive to find one that instead of just saying he is one thing and being another, actually believes he is one thing and is another entirely.

It’s unfortunate but this was Charles Laughton’s only credit as a director, and I imagine this movie must have made a lot of people angry. Although the film is shot beautifully, and the story is well ahead of it’s time, I can’t imagine 1950’s America falling in love with a movie about a psychopathic preacher who always has weird “knife-boners” that may be an allusion to masturbating. This film was made at a time when married TV characters had separate beds so you wouldn't have to think about the possibility of them bumping into each other while they are asleep. I can’t even imagine what American audiences back then would have thought about a movie villain touching his no-no spot.

My only real complaint about the movie is that some of the extended moments in the film were probably just there to attempt to prevent a backlash from people who might interpret the movie as being anti-Christian. There are some extended scenes of one of the protagonists reading Bible verses ad-nauseam, telling religious stories, giving Christmas presents, and so forth. At first I thought the director might be trying to say something about how different people can approach the same religion and one might turn into a monster, while the other might become a better person from it. However given the time period I imagine Laughton must have felt that these excessive scenes were needed to provide a counterbalance to the murderous boner-wielding preacher.

I’m not a big fan of 1950’s American cinema, but this film is still pretty impressive. I can’t say I would recommend it to the average horror fan because it is fairly dated, so it might be a little harder for some modern viewers to appreciate. However, I think this is one of those movies that would be great for a film-student, because from a technical standpoint the use of lighting is probably the most impressive that I've seen in a black and white film, and the fact the villain is still presented much more impressively than many of the antagonists we see in current horror films.