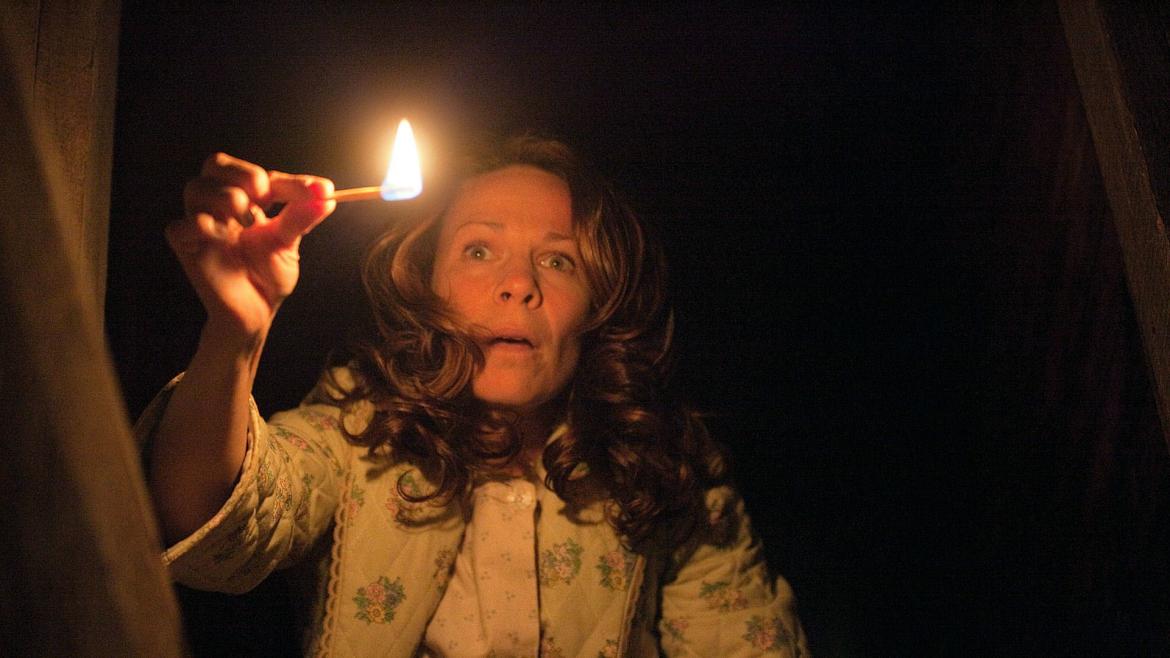 There’s a valuable lesson contained in The Conjuring, director James Wan’s 70s-era spook-fest about the Perrons, a family whose new home has a dark history. Before you buy or rent a residence, take a dog through it. If the dog cowers in fear at the threshold, scratch that place off your list with confidence. This is how Sadie, the Perrons’ pooch, reacts during move-in day, making it seem like a canine consultation during the open house could’ve saved everyone lot of trouble.

Besides being a handy source of real estate tips, The Conjuring is also one heck of a tense, if formulaic, movie. At first glance, those two things don’t seem to jive. After all, how tense can a movie really be if it follows closely to the tracks laid down by those films which came before it? Behold, the majesty of James Wan. The man plays with audiences’ emotions and expectations with ease, overseeing the proceedings like a deranged conductor. His skill at building scares, and some above-average performances, are chiefly responsible for rising The Conjuring above its derivative plotting.

Wan’s movie gets its claws in early, dropping viewers in the middle of the story of Annabelle, a demonic doll who runs afoul of paranormal investigators Ed and Lorraine Warren (Patrick Wilson, his magnificent sideburns, and Vera Farmiga). Aside from being arguably the film’s most frightening sequence, the Annabelle scenes also work as a microcosm for the film as a whole. The notion of a creepy doll moving on its own and coming back despite being thrown out is hardly groundbreaking. Still, in Wan’s hands, these well-traveled tropes shine once again.

After they wrap up with Annabelle, the Warrens turn to the Perrons, who’ve been having a tough time since their move. The mom (Lili Taylor) is covered in anomalous bruises, whimsical family games have been invaded by unseen entities, and the youngest daughter has an invisible new friend. Soon that all spirals into a whole thing about a demon and a witch’s curse. Perfect fodder for the Warrens.

Annabelle aside, the sequence that may best illustrate what Wan and company are up to involves the Perrons’ second youngest daughter, Christine (Joey King). She wakes up in the middle of the night after feeling something tugging on her leg. She investigates under her bed and eventually spots the culprit standing near her bedroom door. Her tormentor remains invisible to us, the audience, leaving our imaginations free to interpret her babbling, terror-struck description as they see fit. It’s an excruciating sequence, built on excellent selling by King and disorienting camera work, and it illustrates Wan’s gift for knowing when to show audiences something, when to hit us with an audio jolt, and when to let us scare ourselves.

The Conjuring claims to be based on true events, but the cold truth is that story is its weakest component. Arguments over authenticity aside, most of what the Perrons encounter feels very “been there, screamed at that.” What makes The Conjuring special, and worth re-watching are the persistent scares Wan and company elegantly deliver.