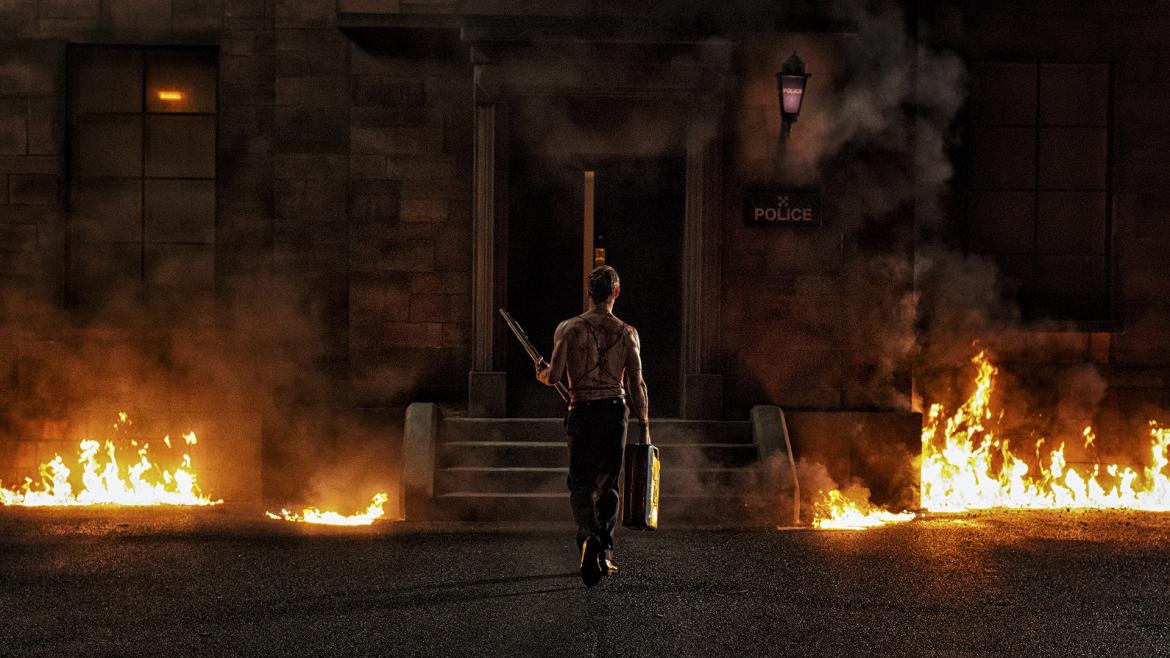 Irish cinema as of late has attempted to stake its claim in the horror genre with films like Isolation, Wake Wood, Citadel, and Grabbers. Let Us Prey looks to build on that momentum atop the shoulders of first time director Brian O'Malley and top notch cinematography. However, while the film is a beautifully shot claustrophobic supernatural thriller it also lacks any semblance of cohesive storytelling.

In Let Us Prey a mysterious stranger (Liam Cunningham) descends upon a sleepy Irish town making a rookie cop's first night on the job a living hell. Rachel (Pollyanna McIntosh), the rookie in question, witnesses a reckless teen hit the stoic stranger with his car, but the body is nowhere to be found until he is brought in by fellow officers seemingly unharmed. Unable to coax the man's true identity and the purpose of a little black book full of names they lock him behind bars. The stranger begins revealing every dirty detail of the sins perpetrated by everyone in the station and before long its a fight to see who can survive before the clock strikes midnight.

Let Us Prey is held together by the sturdy shoulders of Cunningham- who most will recognize as Davos from Game of Thrones. However, even Cunningham can't shield the film from the shaky storytelling at play, though his furrowed brow and ominous demeanor keep O'Malley's film from falling apart altogether. The unraveling of each character comes at a steady clip, but there's nary a moment spent to help one understand the sins they've committed except to show in flashbacks that they are all indeed terrible people. The roads that lead these characters to be placed under the thumb of Cunningham's supernatural influence are a mystery and thus the characters suffer as a result.

Still, it's kind of fun to watch Cunningham taunt the sinners around him with the knowledge of their deeds while snapping matches in half and scowling into the camera. It also helps that the film itself is shot beautifully; giving some of the set pieces a magnificently clear aesthetic to display the maddeningly bizarre character shifts. How Rachel inexplicably ended up as a cop in a town full of sociopaths is just one more notch to chalk up for the film's dizzying array of storytelling pitfalls. But hey, at least O'Malley is kind enough to let the blood flow aplenty in the final act- kudos on that one.

By design Let Us Prey has the appearance of a supernatural thriller capable of standing tall in the genre, but structural issues periodically threaten to collapse all its niceties and smother a great performance from Liam Cunningham. Let Us Prey emerges as a mostly solid genre effort in spite of its flaws and postits Brian O'Malley as a director with limitless potential.