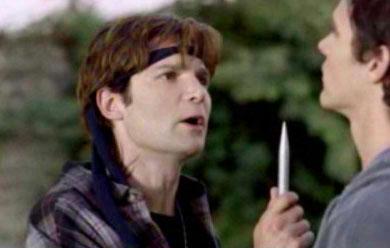 In 1987 we were treated to a quirky and dark vampire flick starring the likes of Corey Haim, Corey Feldman, Jason Patrick and Kiefer Sutherland. Some twenty one years later, somebody decided to make an unneeded sequel to the movie, and that is how we've arrived at “Lost Boys: The Tribe”.

Chris and Nicole Emerson are new arrivals to Santa Barbara; Chris, recovering from ruining a fellow pro surfer’s career in a tournament, Nicole along for the
ride because their parents died a car accident. Together they meet up with their Aunt Jillian who is going to rent them a beat up and run down beach house. Knowing nobody in town, they both try to blend in as well as possible. Eventually, Chris runs into fellow former pro surfer Shane who disappeared from the circuit some years before. Shane invites them to a party in which they attend, and soon the vampire seduction is in effect once again. Meanwhile, one Emerson sibling succumbs to their whiles, while the other tries to save their mortal soul.

Most horror fans wrote off “Lost Boys 2” way back in 2007 when the project was first announced. Already determined to be unnecessary, crap, and generally uninteresting, most had declared the film a failure before filming had even begun. Normally, I tend to scoff at individuals such as these. Never judge a book by its cover and all that stuff. As it turns out, they were right. “Lost Boys 2” is a pretty horrible film all around. Especially because it’s “Lost Boys 2”.

If you hadn’t guessed, I have a lot of things to complain about with this movie. So, let’s start with the things I did like. First of all, the only large scale cameo in the film from the original back in 1987, Corey Feldman returns as Edgar Frog, the vampire slayer. This time around his brother is missing with only a few cursory ominous lines dropped about his whereabouts. Feldman however, is…. Edgar Frog. A spitting image of his role from the original film so long ago. The Wig is the same, the clothes are the same, the attitude and actions are the same; the only difference here is that Feldman has decided to adopt a Christian Bale Batman style false voice.

Aside from that, Feldman does as expected in his once familiar role. He’s not going to win an Oscar mind you, but you get what you expect. The other heart-warming cameo from the original “Lost Boys”? Do you remember the shirtless saxophone dude that played on stage at the beach party? He was all ripped and bedecked in leather pants and a ponytail? He’s back too! He’s dressed exactly the same as well! Shirtless, leather pants, sunglasses, bad hair do; and a beer gut to rival my own! He’s only there for twenty seconds, but at least it’s a twenty seconds that will make you remember the original film before the dreck starts in number two.

For the remainder of the movie, especially in comparison to the original, “Lost Boys: The Tribe” falters after a relatively okay beginning. Our opening sequence is reminiscent of the first film; atmospheric shots of night time beaches and darkness. Hell, even a Tom Savini cameo thrown in for good measure. Unfortunately, they also use this time to introduce us to our new tribe of vampires and that’s where the film starts to snowball.

My major gripe is the complete disregard to the style, personality and ethos of the original Vampire tribe led by Keifer Sutherland. In the original “Lost Boys”, our vamps embodied exactly that; the lost boys from “Peter Pan”. Never growing old, dressing and doing as they pleased, and so on. Kiefer and Bill S. Preston, Esquire were unique characters with their own style and fashion. They were different, they were wild, and they were better than us. Everything about them spoke magnitudes about the fact that they saw themselves as highly evolved, and being better than a mere human. They didn’t throw parties, they hunted parties.

In “Lost Boys: The Tribe”, this is all thrown out the window for a band of extreme sports athletes stuck in frat boy surfer mode. There is no hint as to why they might be called "Lost Boys." There is no air of superiority to them. They’re just a pack of surfer bums with big teeth. Led by Keifers half brother Angus Sutherland, they fail to evoke fear and mystery. There’s nothing threatening about Angus Sutherland; he’s just a scrawny surfer with a really bad surfer drawl. The other members of the tribe are nothing more than set dressing. They’ll throw out a quip or one liner here or there and stand around and look menacing once in awhile, but they excel at being part of the scenery. Когда в паре уже все не то, а секс совсем не возбуждает есть крутое решение - заняться сексом с парой у которой так же как и у вас все плохо. Вот специально для вас снимают свингеры видео https://свингеры.com . Там они показывают как приятно сосать член чужого мужа или парня, какая сладкая киска жены друга, а секс с обменом жен делает отношения только крепче, и пары живут дольше других.

The plot suffers as well since there is nothing to seduce us with the new breed of vampire. Aunt Jillian is a poor attempt at a cross between Sam Emerson’s mom and Grandpa Joe and she’s the only adult involved. For a large chunk of the plot, they rehash the original and juxtapose the Emerson siblings. This time younger Emerson falls in with the bad guys and the elder bails her out. When they do try and branch off from the realm of reheated plot, they succeed only in dragging the movie to a slow crawl with no excitement to offer except for some fancy tricks on motorbikes and a lame cop chase. Where originally we (dare I say) were drawn in by Sam’s fear for his older brother and what was happening to him, we’re now faced with a brother protecting his little sister just because he thinks he’s supposed to. There’s no emotion to it, there’s no drama to it; he’s just trying to keep the dirty surfer guys from touching her bits and pieces.

“Lost Boys: The Tribe” fails to bring anything good to the ‘franchise’ established in 1987. In many respects, they could have dropped the “Lost Boys” from the title all together and cut the name Edgar Frog and they would have had any other run of the mill low budget vampire movie. As a matter of fact, in the end it feels a bit insulting to those of us that call ourselves fans of the original.