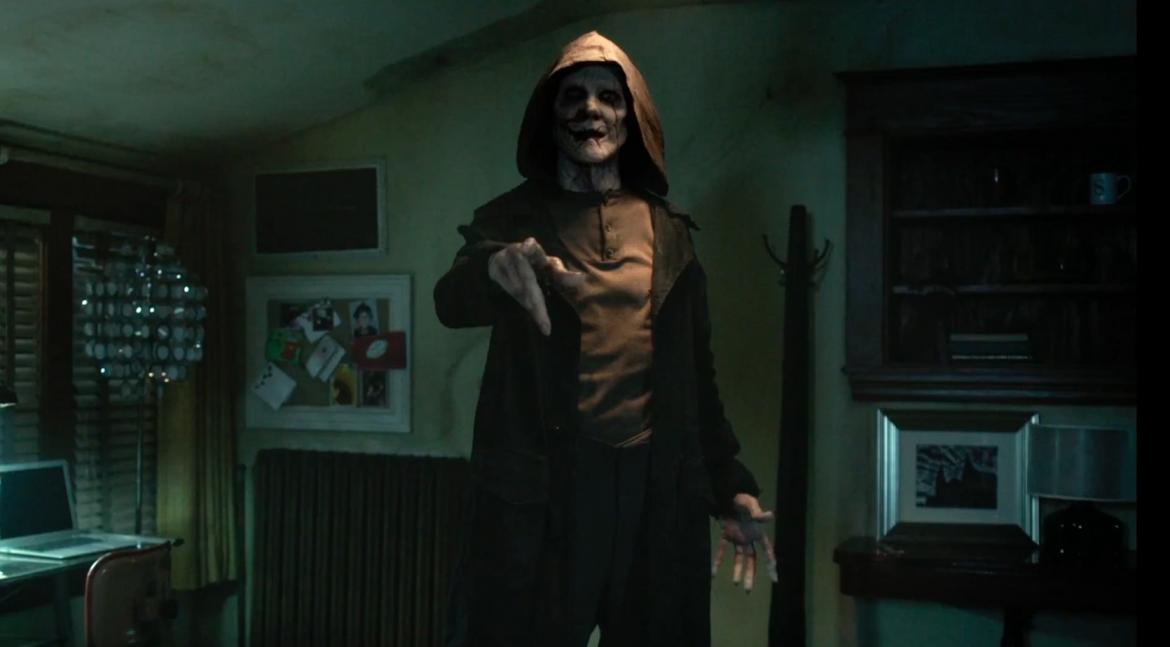 In the same vein as A Nightmare on Elm Street and the more recent Sinister, Stacy Title’s debut theatrical release attempts to bring a new supernatural icon to the forefront of the genre. Sadly, the clear outcome with her efforts is the titular Bye Bye Man is nothing more than a passing thought of 2017, and even the viewing experience itself leaves the audience ready to move on as quickly as possible.

The setup is fairly straightforward at first, involving teens ready to take on a weekend of debauchery and escape in our final victim Elliot’s (Douglas Smith) wooded house. Inviting his best buddy John (Lucien Laviscount) to accompany him and his girlfriend Sasha (Cressida Bonas) on the trip, the connections and possibly pit falls between the trio start to form right from the start. John loves to get the girl, but he isn’t afraid to look at Sasha any way he wants, and apart from the clear sexual tension, the addition of a benevolent killer haunts their idyllic trip.

There’s something unbearably bad from the get go of The Bye Bye Man that never quite leaves the narrative, and that’s the idea the killer can never be stopped. Unlike supernatural or slasher killers before him, the rules surrounding the Bye Bye Man are never clear. Several totems, including a coin, a dresser, dogs, a train, and even the idea of having the lights on all get thrown into the mix as if the audience is intended to cling to each concept as a tantalizing reason for the killings. Of course, none of these amount to anything other than a misdirect, making it clear the only idea that went into the narrative was how to make a sequel; hell, a franchise. As far as scares go, there are few and far between, relying solely on jump scares or poorly timed dream sequences. Perhaps the most terrifying moments in the film come from the performances, from the random cameo from Faye Dunaway to the constantly grating deliveries from Sasha. As each character is written to spiral downward into insanity, it has the opposite effect, sending the viewer into a spiral of boredom and anger.

Additionally, the connections between each "discovery" of new information on the killer is thrown out without reason or logic. Simply denying the killer's existence magically pops into Elliot's head at times, and yet, he tells random characters, including an innocent librarian, about the Bye Bye Man. This decision to leave Elliot reckless and open to hurt others is never fully punished in the story, making it clear it was not part of an ingenious writing mechanic to keep the story fresh and unexpected.

With a mantra of “Don’t say it, don’t think it,” the only real answer for the audience is “Don’t see it, don’t watch it.”