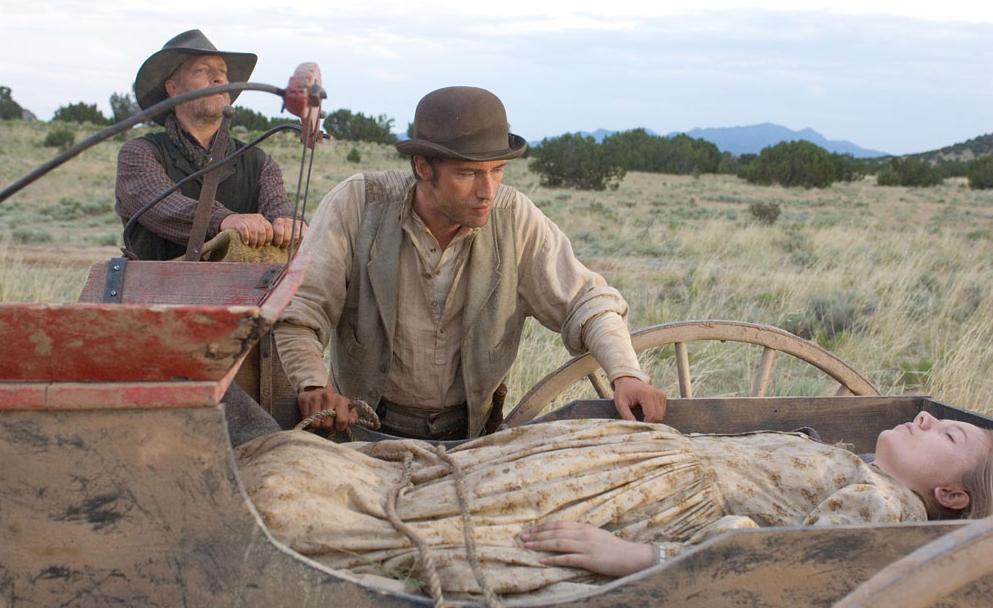 In the past, filmmakers who have set their horror projects within the rough and tumble confines of the old West haven't had much success, both critically and financially. An excellent example of such limp-wristed cinematic goofiness is Richard Governor's grossly uneven 1988 genre actioner “Ghost Town,” a film that narrowly misses the proverbial mark despite a solid turn from late character actor Jimmie F. Skaggs. Naturally, there are others who have found success pairing dusty, horse-whipping cowboys with supernatural villains -- “Dead Birds” and “Grim Prairie Tales” come to mind -- though the ratio of successes to misfires is decidedly small. And while the gems in this peculiar subgenre are worth their weight in platinum tumbleweeds, it would appear that crafting a decent western horror flick is a lot harder than it looks on paper.

“Soft for Digging” director J.T. Petty tosses his faded leather hat into the proverbial ring with the enjoyable 2008 direct-to-video creature feature “The Burrowers,” a film that gets a lot of things right while getting a lot of things wrong. Petty, with the help of “The Devil’s Rejects” cinematographer Phil Parmet, has crafted a stark, depressing monster movie that smartly abandons the clichés generally associated with most low-budget creature features. Were it not for some serious pacing issues, a somewhat downtrodden finale, and the highly questionable use of extremely cheap CGI, “The Burrowers” could have been the crown jewel in the western horror crown. The end result, I’m afraid, will surely elicit mixed emotions.

The setup is as traditional as they come: A rugged group of gun-slinging tough guys - a posse which includes William Mapother, Clancy Brown, and Karl Geary - embark on a journey to locate a missing family that may or may not have been abducted by a blood-thirsty band of Native American kidnappers. The party’s seemingly mundane adventures darken substantially when they uncover a young girl buried alive beside several strange-looking holes within the earth itself, a discovery which suggests that something incredibly sinister is afoot. As our skeptical heroes roam deeper into enemy territory, they soon realize the threat isn’t coming from the hills or the forests, but from the very ground beneath their feet.

The biggest problem with “The Burrowers” isn’t its subpar computer generated beasties or its woefully dispiriting protagonists, but its intentionally slow pacing. There are several irritatingly long lulls in-between the action, giving the film’s prospective audience plenty of time to make mental grocery lists without missing anything worthwhile. By the time anything remotely interesting takes place, it may be too little too late for most. Developing characters and building tension are good qualities to possess, that is, until they get in the way of giving jaded horror buffs something juicy to sink their teeth into. It’s this problematic balancing act that ultimately ruins the film’s slightly misguided third reel.

Regardless of how the previous passages may read, I’m actually a big fan of Petty’s work. “Soft for Digging” is an extraordinary film on several levels, showcasing the man’s exceptional storytelling abilities and his knack for striking imagery without sacrificing anything in the process. Visually speaking, “The Burrowers” is as stunning and haunting as his feature-length debut, if not more so. Had as much attention been paid to the horrific side of this intriguing premise as its presentation, perhaps that nagging feeling that something is missing wouldn’t lodge itself into your brain once the end credits begin their ascent.

All in all, “The Burrowers” is solid entertainment -- for a certain kind of horror fan, that is. For maximum enjoyment, a fair amount of patience and a strong attention are required , so make sure you’re more than prepared to wade through the film’s slower moments. If nothing else, Petty and crew have come closer to delivering a quality old west horror picture than most prospectors who accept the challenge, a feat which should be acknowledged by anyone who’s still waiting for true balls-out genre-bending western. Here’s hoping I’m not the only one.