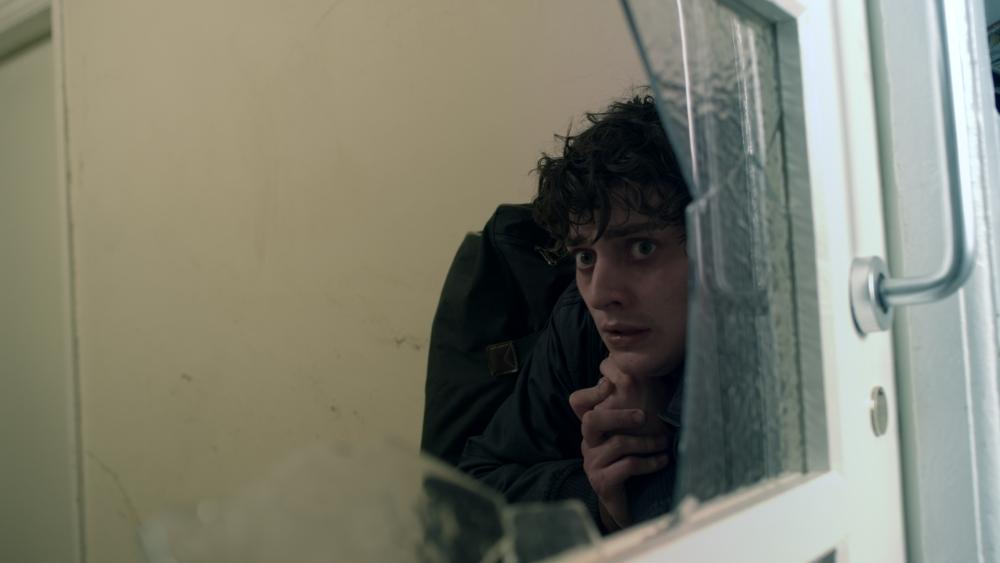 Midway through Ciaran Foy's “hoodie horror” film I had to pause the film in order to catch my breath and stretch my legs. Citadel had the rare effect of unnerving me to my core. You would think that watching hundreds of genre movies a year and knowing a bit about how the sausage gets made would inure me from such occurrences but there I was, remote in one hand while the other wiped off the cold sweat that had broken out .

Citadel kicks off with father-to-be Tommy trapped in his flat's elevator, helpless, terrified and powerless to stop a gang of hooded thugs as they assault his very pregnant wife. The attack makes Tommy an eventual widow and single parent of his infant girl. The attack also traumatizes Tommy to the point where he becomes agoraphobic. The thought of leaving his new apartment renders him a sweaty, twitchy bundle of nerves. His infrequent attempts to leave for his therapy sessions send him into near convulsions. While Tommy tries, and fails, to cope with his new reality, the hooded bastards that killed his wife still lurk in the background.

And then they come for Tommy's daughter.

Citadel's strength stems from the Aneurin Barnard's mesmerizing performance as Tommy and Foy's ability to capture and manipulate every nuance on screen. Barnard makes his character's life feel like a waking nightmare. Every step towards the world outside his door forces his body to rebel against its better instincts, doubling Tommy over with almost unimaginable pain. The emotions you feel for Tommy during his darkest moments swing from pity for his plight to repulsion at his pitiful attempts to pick up the pieces. Amplifying those emotions is the understanding that Tommy not only has to look out for himself, but also his helpless, months old daughter. Foy uses the camera to his advantage, pulling in tight on Tommy's pallid features and tracking his every movement. The effect piles on Citadel's growing sense of paranoia and claustrophobia.

It's not like Tommy doesn't have any reason to be terrified. The hooded kids that attacked Tommy's wife are after his daughter. While you know what's coming, Foy manages to draw out the tension for an extended period of time. Tommy's not safe no matter where he turns, and his attempts to barricade himself inside prove to be laughable. The “hoodies” are a constant presence in the second act, yet the sheer number of near misses and slight swerves Foy pulls leaves you rattled and hoping the kids will just get it over with. When the finally corner Tommy, it's a scene of breathtaking violence, one that is sickening and shocking it its brutality.

If there's a flaw with Citadel it falls in the third act, when Tommy is forced to go into battle in order to rescue his child. Accompanied by a foul mouthed priest (Game of Throne's brilliant James Cosmo) and a young boy who claims to be able to ward off fear, Tommy must enter the abandoned tenement building the hooded monsters call home. On the plus side, Foy recreates the brooding, nightmarish atmosphere of the Silent Hill video game series better than either of their own theatrical films did. However the sequence feels a bit too pat and straightforward. It's a bit too simple of a hero's journey that wraps up with too neat a bow.

There's also a surprising conservative undercurrent that runs throughout Citadel with the idea of the kids being literal monsters. The token liberal character, one who pleads for tolerance and understanding at the circumstances towards the hoodies plight, meets swift retribution for her efforts. An underlying message of the film is some people are just born bad and need to be dealt with accordingly. I suppose one could argue that Foy's promoting a message to strike back against bullying forces. The fact is these hooded terrors emerge from project housing. The world of Citadel is one of tenement slums and concrete graveyards where the inhabitants just don't know they're dead yet. Sunlight barely filters through the constant overcast skies, and the buildings are lit with the harshest of florescent lights. Yet discussion as to what this kind of hopeless poverty can drive a person too is outright dismissed for a more cut and dried antagonist.

While it falls a bit short at the end, Citadel remains a tense, gripping thriller, and one of the best of the past year. I'm an admitted sucker for any horror where small children are put in peril, but Citadel goes above and beyond when it comes to ratcheting up a nightmarish experience.