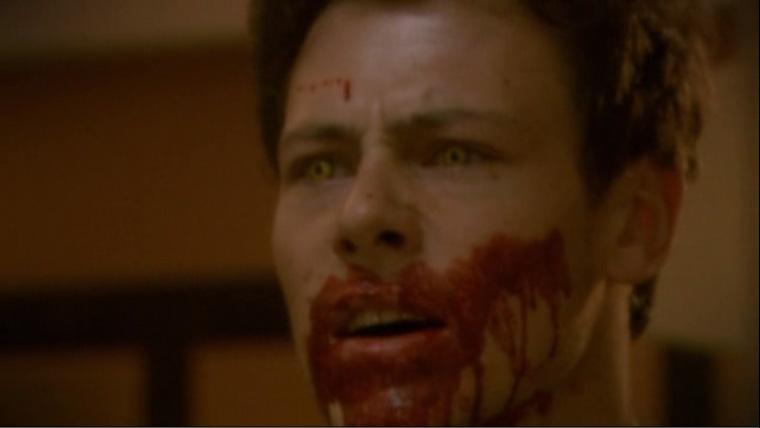 Along with topics like boobs and gore and clever one-liners, horror cinema also probes other subjects with the same aplomb. Subjects like the moral repercussions of transhumanist science, the blurring of the line between man and God and the depredations of the white military industrial complex upon the natural world. Both of these themes resonate deeply in the 2007 Canadian made-for-TV movie “Hybrid,” albeit without the same level of care and thought that went into this year's “Splice,” which is clearly a film strongly influenced by “Hybrid.”

Dr. Hewlett (Justine Bateman) is a scientist working at Olaris (which, according to Google, produces Dance and Progressive House music when it isn't dabbling in weird science research), where she has pioneered trans-species organ transplants. Like a monkey with the eyes of a Siberian husky. She shares her research with local doctors, hoping to get a lead on the first animal-to-human transplant. Meanwhile, Hewlett's nameless colleague (William MacDonald) hopes to sell the implant technology to the military despite Hewlett's wish to use the process to help people.

When a security guard (Cory Monteith) loses his sight in an industrial fire, he's recruited as a test subject by Hewlett and given the eyes of a wolf. The transplant is successful, and Monteith's Aaron gains the following abilities from his new wolf eyes: 1 - Blurry vision. 2 - The ability to see in full color in total darkness. 3 - Weird hallucinations of leaping wolves that look like a fight scene from “Blood and Chocolate”. 4 - Super-hearing. 5 - A Jacob Black-esque shirt allergy

Starting to be overcome by strange, animalistic urges, Aaron breaks out of the Olaris facility when an attractive young Native American schoolteacher (the Twilight saga's Tinsel Korey) breaks in to release the lab's animal test subjects in protest of the corporation's animal research. In particular, Lydia is distraught over the fate of a wolf she rescued and took to a veterinary clinic. This is of course the same wolf whose eyes were used in Aaron's transplant; Lydia recognizes the eyes instantly when she encounters the escaped Aaron and this is how the audience knows that they will fall in love.

The lovebirds hide from military contractors out to hunt Aaron down, which becomes increasingly more difficult as Aaron attacks drunken frat guys, breaks into zoos and leads packs of wild dogs through the Canadian streets on a shirtless midnight run. Eventually, he is captured, brutally attacks his therapist, escapes again and, with the help of Lydia and an old medicine man, goes on a vision quest to 'integrate the two souls' or something. This involves the kid from “Glee” getting high and playing a drum. Then there's a final showdown between Aaron and those military guys from before.

“Hybrid” could have been an interesting movie. It tries to ask whether or not Aaron is really all wolf-powered, or if he's just experiencing a psychological reaction to having wolf eyes surgically implanted in his head. The story plays with some werewolf-movie beats which add to the is-he-crazy ambiguity a bit, but that conundrum is ultimately abandoned completely in favor of hand-wavey mysticism about spirit animals. The issues with the inconsistent plot are exacerbated by the fact that a lot of the connecting tissue of the film is simply missing.

For instance, Aaron is nearly hit by Lydia's truck, she gets out to confront him, recognizes his eyes...and cut away to another scene, which cuts back to Aaron and Lydia driving somewhere. Character motivations are largely absent from the movie because of this and I am not sure whether it's a brilliant technique, a la Grant Morrison's super-economical comic storytelling in “Final Crisis” or just seriously the worst editing ever. Another byproduct of the editing is the feeling that all of the characters have some kind of limited omniscience – at one point, Dr. Hewlett starts researching psychological lycanthropy, but has no indication that this would be affecting her patient except that the audience saw him starting to act wolfy in the preceding scene.

With a nice session beer and some friends, I think “Hybrid” can hit so-bad-it's-good territory pretty easily, especially for any horror-inclined Gleeks. It is a ridiculous film, but not in the way that makes you angry. “Hybrid” is terrible, but it can be a pleasing diversion for schlock-lovers and hipster cineastes.