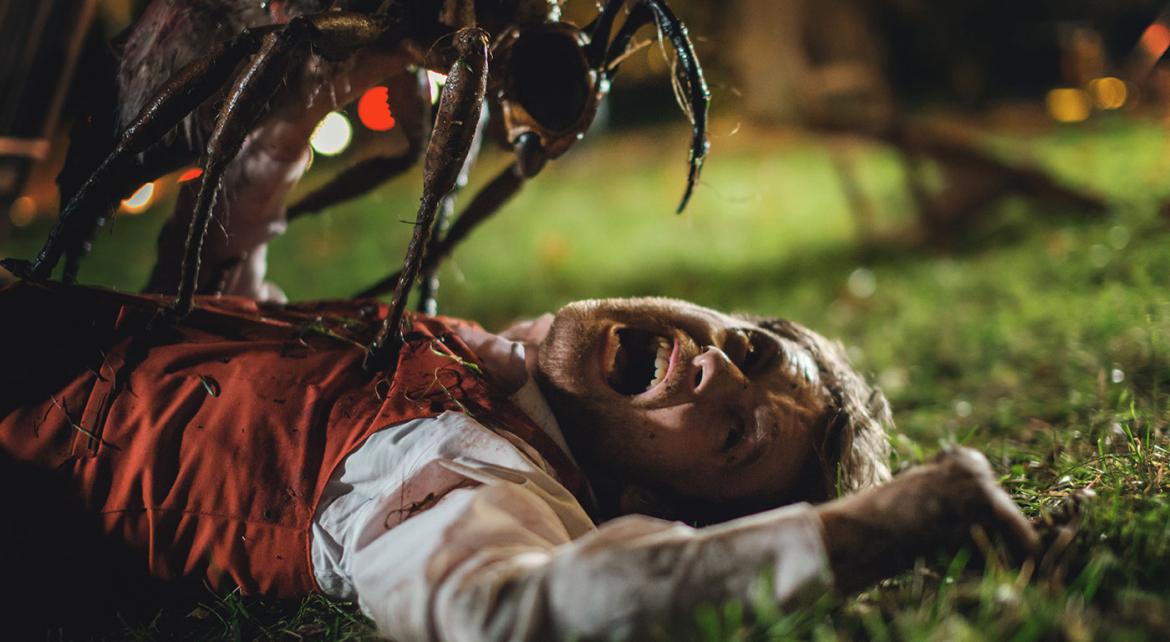 Combining a first time director with a first time writer seems like a creature feature all in its own. The movie suffering from that magical combination is Stung, a mutant bee flick graced with two great character actors that's heavy on gore- sounds like a win win right? Well...not really. The best thing about Benni Diez's feature length debut besides the practical effects is....well no on second thought, it's just the practical effects.

Stung's central premise is nothing more than a pair of caterers that find themselves pinned down in a richy rich estate under siege by giant mutated wasps. There are passing takes of back story to some of the side characters, but it really is nothing more than that super simple logline from beginning to end. Lance Henriksen and Clifton Collins Jr. tag along (in minor roles) as shish kabob meat for the super sharp stingers, but contribute very little to anything resembling plot points instead opting for the occasional poorly written one-liner. Collins Jr. of everyone in the cast might be the least to blame for how inept this movie is around every single corner as he tends to be at least partially delightful when he's on screen. Henriksen on the other hand, well, I read somewhere once that there is no such thing as a bad Henriksen performance and that there's just good Henriksen in bad movies- well sorry to report, the iconic character actor phoned this one in in the worst possible way- bad Henriksen, bad movie.

If you jump on board Diez's ship hoping for nothing more than some B movie thrills...more bad news. Yes, there are some spectacular practical gore effects and practical giant wasps tearing through people's flesh, but those moneyshots are few and far between. Not to mention that the Syfy level CGI integrated in from time to time cheapens any good will the practical effects earned. This is Adam Aresty's one and only film credit (according to IMDb) thus far, and it's a dud of a screenplay. If you want an example of how not to shoehorn in a romance smack dab in the middle of a horror flick, look no further folks. The two leads have at least some chemistry, but it's impossible to care about the will-they-won't-they aspects of their "relationship" and so much easier to wish for a stinger to tear through both lover's faces with every passing second. If that's not enough, Aresty and Diez fail at every opportunity to establish rules to the mutant bugs ability to multiply and how long it takes to do so. Essentially the movie feels like it has the seeds to a good idea, but a team behind the camera with zero patience to see it through logically.

Given the rookie stature of director and screenwriter, it's amazing that this movie ever saw the light of day. If not for some of the skill involved with the practical effects it's frightening to think of how much worse this could have been. As much as it stings to say this, Stung is a dull waste of film on almost every single relevant level. There are solid moments of gore, but mostly this is a waiting game from one abbreviated action scene to the next. That or it was just an exercise to see how much bug squashing audiences are willing to endure.