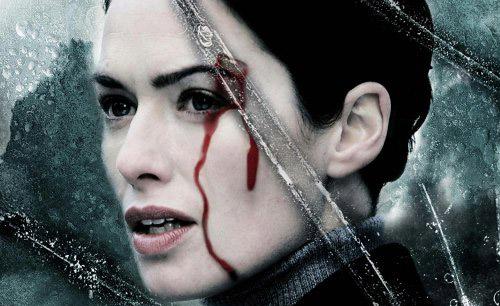 Lena Heady (From TV's The Sarah Connor Chronicles) is a young x-ray technician who has a happy life. She has a good job, a loving family and a caring boyfriend. All seems well and good at the latest family dinner. That night, they are all taken by surprise when the dining room mirror shatters for no reason.

Written off as an odd coincidence as every one heads home for the night, the event is soon forgotten. The next day, as Gina McVey drives into work, she's taken to momentary distraction which leads to a head on collision. Rushed off to the hospital and treated, she's soon released with a clean bill of health. That, and a warning of the emotional turmoil that can come with head trauma. Gina isn't too worried, she's familiar with how the body works after all. That is, until she sees herself drive by on her way home.

"The Broken" wants more than anything to be a psychological thriller. They have all the essentials; a driving score, slow unfolding mystery, jump scares. Even the premise is titillating and intriguing. In the final product, "The Broken" comes close to living up to these promises, but becomes plagued by problems with pacing and a general lack of thrills.

There is definitely room in the genre for cerebral style horror, especially in today's landscape of quick takes, shaky cameras and torture films. For such a film to be compelling though, it must have the power to suck in the viewer and then smack them at just the right time. In "The Broken", although they make an effort, they fall short of every mark they needed to hit.

By the time they draw back to deliver a slap, we've already lost interest. The film lacks in foreshadowing, is heavy in idle character development, and the first two acts of the film feel flat and unmoving. While such development is essential, there has to be meat there to keep you engaged. You can't show repeated viewings of the car crash without explaining why. We have to have more signs that things are turning for the worst instead of throwing out something strange for shear shock value. There are essential components to the psycho-thriller and if you want to play with the big boys, you need to play by at least the basic rules.

Primarily a fault of editing and writing, the movie does not fall slack due to the efforts of Lena Heady. She serves well to draw us into the emotional events. The problem is that the entire movie rests solely on her shoulders. There is a full cache of actors packed around her and to be fair, none of them do anything to detract from the film. The cast is capable and do well with what they have to work with. They simply are not used well in the film. Nothing more than set dressing most of the time, they soon become forgettable.

A movie filled with potential yet leaving you hungry for more, "The Broken" is a classic case of falling short of the mark. There was much to this movie I wanted to love, but with a first half that felt like a chore, which made it very hard to care about the film when it finally did pick up. There are much better films to check out in this year's After Dark Film Fest, so avoid this one.