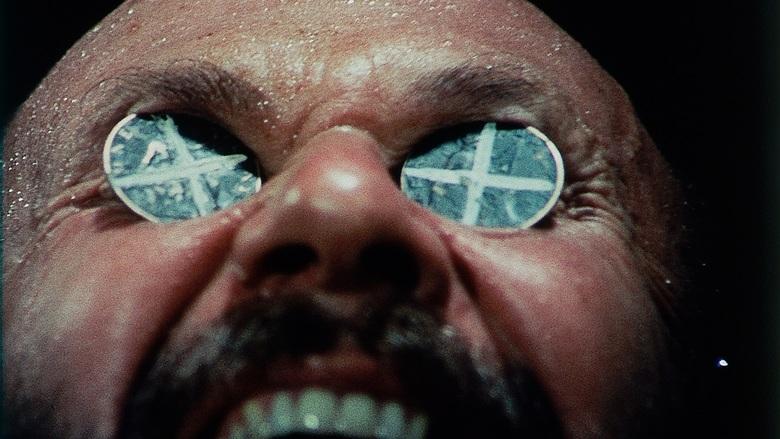 In "Wake in Fright", a teacher in Australia decides to spend a few days of his summer vacation in a remote town called “The Yabba”, and quickly becomes trapped there.  He instantly gambles away all of his money on a high stakes game of coin flipping, and has to rely on the kindness of strangers who are more than happy to buy him enough beer to keep him perpetually wasted.

After an unsuccessful attempt at sex with one of the town’s only women (he’s too busy vomiting to perform), he winds up in a tin shack with an alcoholic doctor played by Donald Pleasance.  Things quickly go from weird to weirder as they are joined by two hunters and go racing around the outback, massacring kangaroo in what is the most graphic depiction of onscreen animal violence I have ever witnessed.  They then continue to get drunk to the point of blacking out, and it is insinuated that the teacher and the doctor have sex.  Afterwards the teacher begins to lose his mind as all of his attempts to escape the Yabba are fruitless.

Apparently this film was lost for quite a while and if it hadn’t I can only imagine that “Wake in Fright” would easily be as notorious as “Cannibal Holocaust.”   However the animal violence in “Cannibal Holocaust” felt completely staged and pointless to me, while in this movie it is absolutely visceral and horrifying.  And as the ungodly levels of real violence certainly qualify this movie as genuine exploitation, “Wake in Fright” does not feel sleazy for the sake of sleaze.   It feels much more like a genuine art-house film, where everything seems purposeful instead of overly voyeuristic.

While this movie is certainly filled with all kinds of symbolism and social commentary I’m really left wondering what it all means except: Don’t ever go to Australia under any circumstances.  If movies like “The Cars that Ate Paris,” and “Wolf Creek” hadn’t already made that country seem terrifying enough, this one takes things to a whole different level.  I’m not going to moralize about animal violence in film, but I will say that this is one of the most shocking movies I’ve ever seen, and one that’s left me completely dumbstruck.  When I started watching I had no idea what I was getting into, and if I had, I don’t know if I’d have gone through with it.