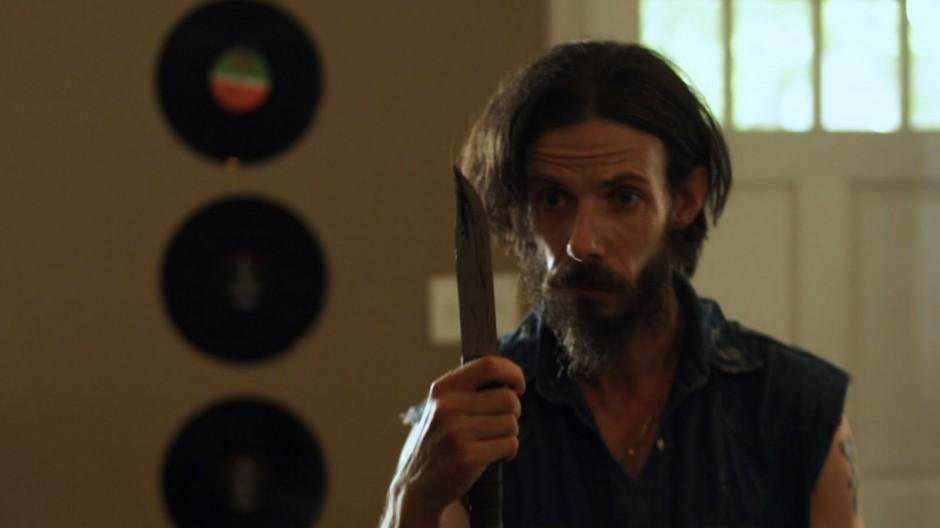 The machinery at work in Simon Rumley’s “Red, White, & Blue” may not be strictly horror but it does belong to the darkest corners of post-millennial neo realism. Thematically it is lays eggs in the same tall grass that serves as the dank, unhealthy keep for Todd Solondz grimiest cinematic dreams. Rumley’s reflection on the sludge trails navigated by desperate half-way housers and wayward young middle men who are at the cross-roads of ideas and ideals doesn’t share the wit or biting sense of humor that auteurs like Solondz or Harmony Korine employ to drive the perverse into the realm of the ridiculous. Instead “Red, White, & Blue” strikes out to tell its story without fun or fanfare and to leave the audience in despair with questions about the merits of freedom and its multitude meanings.

The film follows three very different main characters to a point of intersection. Erica is a threadbare profligate who makes sexual sorties nightly with intentions of numbing herself to her unresolved traumas as well as feeling connection on the only level she can manage. Nate is a reclusive veteran possessed of a skill-set that seems best suited to hurting people physically. He is making his way; working at a warehouse and bunking in the same flophouse where Erica has been trading cleaning duties for a room. The last of this disparate trio is Franki. Franki is a somewhat shiftless rocker who is nearing 30. His mother has cancer and Franki has a growing idea that his band may not be his ticket out of the toil of his twenties.

One night Franki and a couple of his bandmates hook up with Erica after meeting her at a bar. The next morning they all go their separate ways thinking that what was between them was just another evening of joyous sport-fucking had by all. Soon thereafter Erica is told by the woman who runs her boarding house that she can no longer offer the work for room trade out and that Erica must begin paying rent. Despite being a substantial bitch to him, Nate manages to land Erica a job at the warehouse where he works. Eventually the two of them wade carefully into the relationship pool.

Meanwhile Franki’s mother goes into remission but in short order the aspiring rocker finds out that he has tested positive for HIV. He and his band mates narrow the suspects down to Erica and then set off to confront the girl about wantonly spreading the disease. Erica disappears from a dinner date with Nate and winds up in the cellar of Franki’s house where violence ensues. Nate follows up some clues that Franki and crew left behind in hopes of finding Erica before anything too dire happens. But this violent man’s primal impulses begin to take control of him and eventually his search turns bloody.

“Red, White & Blue” has two nice performances in it. Amanda Fuller is impressive as Erica. Her character is a woman who has lived her whole life without an enduring source of love and because of this she has suffered through ungodly circumstances from a young age. Fuller portrays Erica with equal parts hopelessness and fire, and gives life to her conflict when the possibility of real love is introduced. Noah Taylor also dances his character nicely between two states. As Nate, Taylor shows us several shades of both craze and quiet. In doing so the actor lends much needed heavy portent to the ever- constricting circle of this existential drama.

Sadly, because of a weak performance and a poor construct “Red, White & Blue” ends up making a middleweight out of what should have been a heavyweight narrative. Marc Senter who plays Franki is uneven at best and at times he is painfully self-conscious. His inability to deliver certain lines or rework them to make them his own is a scene killer. As Ray Pye in “The Lost” Senter had similar issues but that film never left him alone to do the heavy lifting, and succeeded because of that choice. Here Rumley gives the entire second act and a good deal of the third over to Senter as Franki and it is this mistake that keeps “Red, White & Blue” from being recommendable. Had there been some greater checkerboarding between characters or a lot less of Senter in dramatically charged situations Taylor and Fuller might have shone through the rough patches. As it is this is a set of alternately sensitive and violent bookends that sandwich an overacted middle passage. These structural weaknesses and performance issues undermine what should have been a destabilizing finale filled with horror and poignancy. They also rob it of the ring of authenticity that it so desperately needs to be a successful film and one worth watching.

Alien Predators aka The Falling