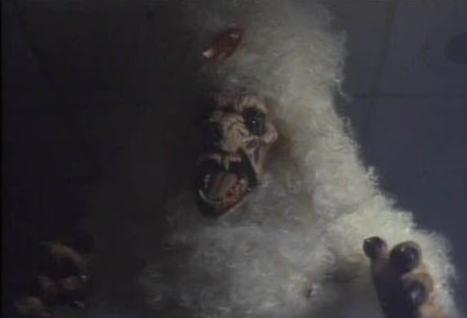 In case you were wondering -- and I'm almost positive most of you weren't -- I watch a lot of cheesy motion pictures produced during the 80's and 90's. And as sad as it may sound, I actually pride myself on the embarrassing number of films I've managed to stuff into my desensitized, oversaturated little mind. Diving into a creamy cinematic vat of genre-related obscurity is one of my favorite pastimes, rivaled only by my addiction to poorly-dubbed, low-budget kung fu movies, the sort that usually come packaged by the metric ton. I'm sure all of this has something to do with my lonely childhood and a decidedly morbid world perspective, but I'll save the specifics for my next therapy session.

How James Cummins' 1991 gore-soaked freak-out "The Boneyard" slipped under my expensive, state-of-the-art B-movie radar is beyond me. It seems like the sort of campy, over-the-top nonsense I should have seen at least two or three dozen times by now. It's rich in cheesy nutrients, and it even comes served with a side-order of Phyllis Diller, who co-stars as a cranky old woman named (wait for it) Miss Poopinplatz. Combine this with its dry, "Movie of the Week"-style presentation and you have, in theory, the recipe for a future cult favorite. I'm surprised this demented little number doesn't already have a rapid, deeply devoted following.

After all, there aren't too many motion pictures currently available to the public that feature creepy, flesh-eating zombie children, an unusually overweight female lead, and a climax which features a giant demonic poodle playing fetch with pipe bombs deep within the bowels of a county morgue. Did I mention the rookie cop armed with some sort of bizarre miniature Gatling gun and Normal Fell's unreasonably long ponytail? It's in there, too, but to be perfectly honest, all I really wanted to see was the poodle and the pipe bombs.

The story itself is a fairly straight-forward tale involving a small group of off-beat characters, the aforementioned undead moppets, and the quest for survival. Deborah Rose stars as Alley Cates, a woman plagued morning, noon, and night by her unwanted psychic abilities. After being called back into action by an old friend desperate for some help in his latest police investigation, Alley journeys to the nearby boneyard (read: county morgue) to have a look-see at the bodies of three decomposing children. What begins as a simple examination, naturally, soon turns into something else altogether.

Thanks to an ancient Chinese curse that slowly transforms its victims in decaying sacks of flesh with a thirst for human blood, this trio of hideously deformed corpses suddenly spring to life, murdering the first poor bastards they happen across. With the elevator out of commission and those freaky demonic kids lurking around every corner, our ragtag squadron of unusual heroes must band together to escape with their backsides intact. Did I mention that the overweight lady battles an enormous canine at the end of the movie? If so, it's worth stating again.

"The Boneyard" does, on occasion, snake its way under your skin, particularly when the action focuses on the dining habits of its pint-sized monsters. These genuinely terrifying creatures are easily the most horrifying aspect of the entire movie, so you can't help but wonder why, exactly, writer/director James Cummins decided to inject so much cornball humor into his script. It's uneven tone, combined with some questionable performances from its peculiar cast, ultimately commit the film to the "Unintentional Comedy" wing of cinematic spectrum. Of course, none of these thoughts and ideas mean anything whatsoever. All you need to know is this: A giant poodle, under the influence of an ancient Chinese curse, plays fetch with a pipe bomb. The rest is superfluous.