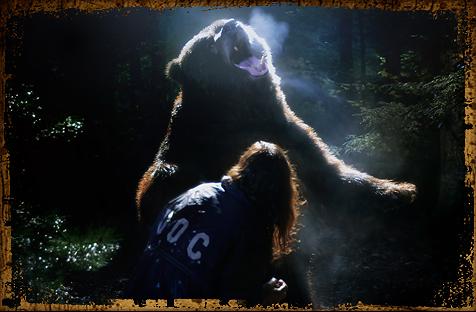 A group of stereotypical young people are in trouble with Johnny Law. Their punishment? They have to camp out in Grizzly Park for a weekend picking up trash with Ranger Bob. As they head out to the park the headlines report a story about a deranged lunatic who has escaped from the local prison and is at large. Now this gaggle of youth is setting off for the wilderness filled with wild animals and a psychopathic killer.

Most movies containing an escaped psychopathic killer are formulaic; there’s a set path of killer on the loose, youth gone wild, and dead teenagers. “Grizzly Park”, which overall is a generic horror flick with mostly standard elements, manages to stay above the board a bit by changing up the formula. The movie is still pretty predictable, but writer/director Tom Skull goes a long way to throw you some minor twists that keep you guessing a bit, which ultimately keeps this one watchable.

The most annoying issue here initially comes from the blatant stereotyping of the young adults in the chain gang. Most are typical; neo-nazi kid, blonde Paris Hilton wannabe, dingy fake breasted bimbo, sassy Latina chick…the list goes on and on. What keeps “Grizzly Park” firmly in the generic zone is our lack of sympathy for any of these youth. However, what keeps us jumping is that throughout the majority of the movie it’s hinted at what each of these kids have done to wind up in work camp, but never fully revealed until much later in the film.

The stereotyping early on in the film was actually misleading; as they blurt out a list of crimes and we see the kids acting their bit, you start guessing throughout the remainder of the film as to who did what. It’s briefly mentioned that one was arrested for prostitution; there’s at least three girls in the group that could pass for a prostitute. There are even minor visual clues thrown in to help with this confusion as well which ultimately keeps the moving flowing and vaguely entertaining.

The writing is the highlight in “Grizzly Park”. The acting, while passable, was nothing special yet still manages to transcend most of the direct to video skills that are out there today. What brings us back though is the writing and the fact that they simply do not go where we expect them to go. This still could have been handled better overall, but the movie as a whole is an enjoyable watch. Though it sounds odd, it’s formulaic…but not. Everybody acts as you expect them too, but all have just a minor change to make them stand out.

There are some decent kills here as well as the movie flitters back and forth between a serial killer slasher and a man against nature monster flick. Wolves and Grizzly’s call the state park home of course and they are a definite factor as to what’s going on around here. The gore is handled well, without CG even which says a lot in this day and age. Good old fashioned latex and food coloring abound and helps to give the movie a familiar feel. (And Grizzly bears are so kewt ^__^!)

Director/writer Tom Skull is one to be watched in the coming years. While “Grizzly Park” is not an award winning movie and it has its faults, it’s the basis of a decent horror flick that you won’t regret watching. This shows that Skull has the chops to make it out there, let’s just see what he does with some experience under his belt and perhaps a bit more money to back him up.