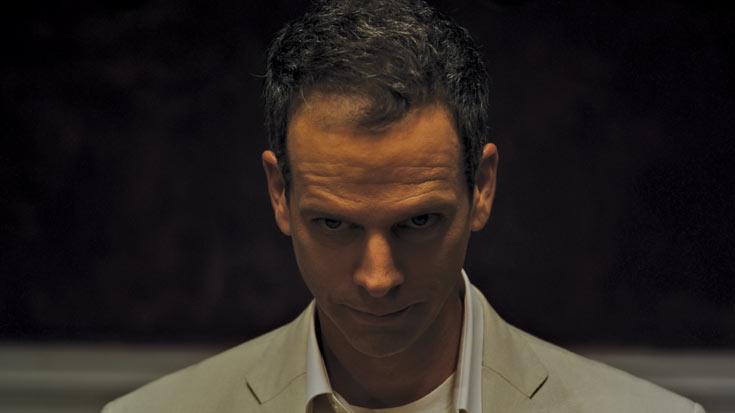 Jes’ sit down and rest a spell and let me tell you about a little picture show I happened upon. As I recollect it was called “The Bleeding House” and I fear I have to say it bored me something awful. It took elements of those torture porn pictures the young ‘uns are so fond of and grafted ‘em right on to a slow-paced indie drama like a bullfrog sloppin’ a hog on the fourth of July. What’s worse, the primary antagonist was a seersucker-suit wearing psycho with an irritatin’ Foghorn Leghorn accent who is fond of overblown speechifyin’ any time the movie dares build up a modicum of tension. Heavens to betsy!

OK, let’s just get this out of the way: I found the bad guy’s ridiculous attempt at a southern accent so terrible that it grated on my nerves and took me out of the movie entirely whenever he spoke. There’s this particular form of ersatz southern speak that used to be common in movies but in recent years has mercifully died out aside from the occasional comedic use. When it’s meant to be funny, I don’t mind someone performing in crackerface. When I’m supposed to take someone seriously who speaks like they graduated from the Andy Bernard School of Savannah Molasses Accent Training… well, it begins with eye-rolling and ends with me wishing the character would either shut up or die already.

The film features a family who are ostracized from the rest of their small Texas town for reasons that are mysterious at first. The father is a lawyer who can’t seem to find work. The mother keeps the silverware locked safely away and cuts everyone’s meat for them at dinner. The son dreams of moving out of his parent’s house and running away with his girlfriend (which he probably should get around to considering that he appears to be in his mid-20s). The daughter only answers to “Blackbird” and has a penchant for Hot Topic fashion and pinning dead bugs to her wall. Their weird and creepy existence is disrupted one day by the arrival of a stranger (he of the aforementioned irritatingly bad accent). The stranger claims that his car has broken down and that he just needs a place to stay for the night. The parents overcome their initial distrust and invite the stranger in. Of course, this wouldn’t be an indie art film slumming it as a horror flick if there wasn’t an obvious twist: the stranger is a self-styled angel of vengeance who has come to punish the family for their sins of the past.

From this point, the film plays out exactly how you’d expect. People get killed, some in overly elaborate ways, somebody escapes and hides out and it all builds up to a shocking finale that is a complete surprise only if you’ve never seen another movie before. Special mention needs to be made of just how dull and lifeless this film is. Think “House of the Devil” with the third act lopped off and a generous sprinkling of overwrought speeches in silly accents that we’re apparently supposed to take seriously. If you look down on horror films but inexplicably want to watch one, this is the movie for you. Fans of the genre (or just fans of movies that aren’t bland and pretentious) should look elsewhere.