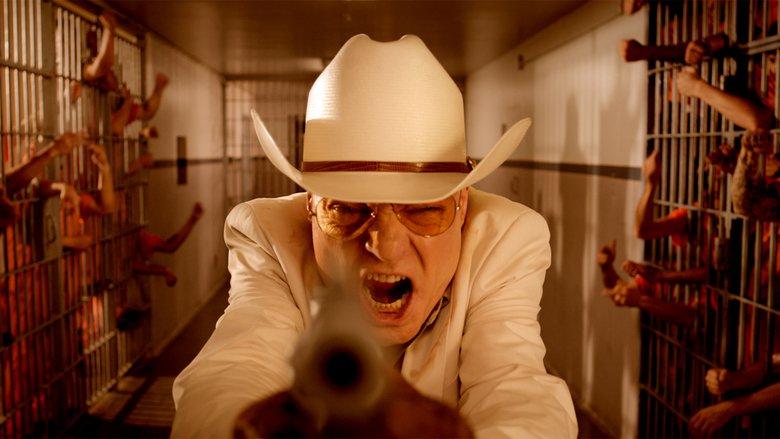 In a weird way, the thought of another Human Centipede movie is less disturbing than the thought of the final Human Centipede movie. After all, we’re already familiar with the escalation writer/director/series creator Tom Six is willing to perpetrate from one film to the next. However, the mind reeled at the level of nauseating madness he might execute in the name of sending his body horror/torture series out with a bang. In practice, Human Centipede 3 (Final Sequence) turns out mostly as expected. It’s loud, it’s foul and it’s Meta – but it’s not without its surprises.

Just like in part two, Human Centipede 3 is about a bug-eyed weirdo who is obsessed with the Human Centipede movies. Also like part two, that bug-eyed weirdo is played by Laurence R. Harvey. This time, Harvey is playing Dwight, a new character who is accountant at the most morally and financially bankrupt prison in the U.S., possibly the world. If Dwight doesn’t think of a solution to the prison’s monetary woes, both he and the prison’s masochistic warden, William Boss, (Dieter Laser, who played the crazy doctor in the original Human Centipede) are going to get fired.

Dwight finds inspiration in the Human Centipede films and decides attaching all of the prison’s inmates together mouth-to-butt would eliminate violence and slash the food and medical budgets. He decides this very early, but it takes time to actually pitch it because the warden is far too busy being psychotic, torturing prisoners and psychologically and sexually tormenting his secretary (Bree Olson) to hear it. Once he does, he gets on board and even manages to find a way to take the concept to a new level.

The biggest upside and most surprising thing about Human Centipede 3 is that, unlike its utterly joyless predecessor, it’s good for a few, seemingly intentional, laughs. The man who gets the most of these is Laser, who spends much of the movie screaming and jabbering in a German accent so thick that he’s barely comprehensible or tolerable. However, he occasionally manages to tone things down and nail a few deadpan lines in a fashion that would make Christopher Walken proud.

Another upside is that the film, despite being revolting, doesn’t one-up part two. There are still the requisite graphic close-ups of torture and mutilation and there's plenty of perverse sexual stuff going on. It's all just less than what we saw previously.

That’s the good, such as it is. The bad? The movie is way too long and the story is razor thin, despite Six's attempts at shoe-horning a political message into it. The movie opens with Dwight showing the warden the Human Centipede films so viewers know where it’s going and one character in the film knows where it’s going, but it still takes 40 minutes to get there. It’s an exercise in pained stalling.

Despite falling short of the very high bar set by part two, Human Centipede 3 still burns a lot of calories trying to be offensive. The warden never met an insult or swear he didn’t love screaming like an angry child who has watch too many R-rated movies. Also, he receives a package from Africa at one point containing “items” he plans to consume for strength. This point has zero to do with the plot or characterization. It’s just a cheap way to get a reaction out of viewers.

Where does that leave us? Viewers who’ve dug Six’s shtick through the first two divisive Human Centipede movies will be good with part three. Viewers who hated the first two won’t likely be won over by it. For viewers who’ve managed to avoid any of them to this point, there’s no reason to break that streak now.