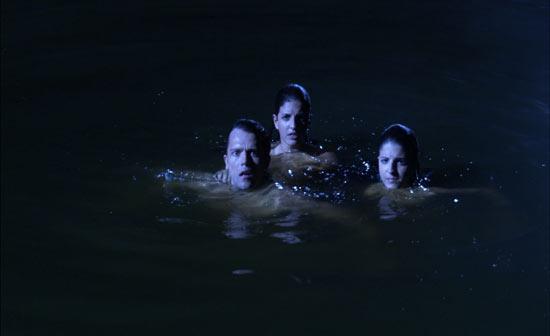 Although convention memories (and specifically Horror Hound Weekend memories) usually consist of the wacky or alcohol related variety, there is a very important aspect that can be ignored: the movies. The experiences can vary from the not-so-favorable ("Shuttle") to absolutely mind-blowing ("Inside"), and anywhere in between. Judging by the tremendous line for the premier of Gabriel Bologna's "The Black Waters of Echo's Pond" at 2009's November Horror Hound Weekend Cincinnati, it was obvious that people were expecting the latter. Thankfully, this flick, while far from mind-blowing, was a really good time, especially when viewed in a packed convention hall.

The film opens with an origin sequence depicting the unearthing of an ancient contraption on an archeological dig in Turkey. Through mysterious means, the entire dig party ends up dead, with the last member killing himself after murdering a cohort. Fast forward to the present day: a group of sexy 20-something couples and stoner 7th-wheel Rick, played by James Duval ("Donnie Darko", "SLC Punk"), meet up on a private island for a weekend of drinking, skinny dipping, and pot smoking. The island and the home they are staying in is owned by a shotgun-wielding drunk named Pete, played lovingly by Robert Patrick ("Terminator 2","X-Files"), who gives them free reign as long as they don't burn the place down.

After a brief introduction to the characters and an inconvenient power outage, the gang discovers a large box in the basement that contains a game which is obviously quite old and, as you come to find out, a bit possessed. The game plays out much like truth or dare, but seems to have an uncanny knack for raising the most uncomfortable questions and bringing out the worst in these friends. As the game goes on, a complex interpersonal net is woven between all of the characters, who at various points in the movie become "possessed" by the game, and perpetrate various acts of gory b-movie violence on one another, motivated by their worst fears, insecurities, and jealousies. In the midst of all of the craziness, more of the story is fleshed out through reflections in "Echo's Pond", a mirror-like pool in the middle of the board that reflects the truth of a situation when one of the co-eds is lying or stretching the facts.

Despite the wackiness of an all-powerful board game, "The Black Waters of Echo's Pond" is certainly more "The Evil Dead" than "Jumanji", and the influence is pervasive throughout. Although it occasionally touches on serious topics like drunk driving and unwanted sexual contact, it's never more than a few minutes away from a bit of stoner humor, a bare buttcheek, or a bright spot of wild gore. It is really that B-movie charm that holds this film together, and gives the viewer ample rewards for soaking in A LOT of interpersonal back story between the characters. The back stories themselves are logical and make perfect sense in the context, but without a shower scene or a chainsaw evisceration to break them up, the melodrama threatens to overwhelm the film. Fortunately for the viewer, it doesn't. Add to that the fact that this film is genuinely funny throughout, and it amounts to a well balanced experience overall.

In a cast with familiar names like Danielle Harris and the Avellan Twins from Grindhouse/Machette, James Duvall's character, Rick, emerges as the real standout of the film with his inescapable marijuana-soaked "cool guy" demeanor and occasional one-liners. Unfortunately for him, he was cast as a complete piece of garbage. There's a scene early on in the film where, through playing the game, the other characters read Rick the riot act about his various past transgressions including being an accessory to the fatal drunk driving crash of Danielle Harris' character's brother. These misdeeds all work in the story logically, but the way that Duval is treated as the movie goes on makes it really difficult to dislike him even though you are told from the beginning that you're supposed to.

Overall, "The Black Waters of Echo's Pond" is very well paced, and has plenty of action and titillation to hold the attention of genre fans, and has a satisfying payoff in the end. I would have liked to see more exploration of the mythical aspect touched on in the beginning, especially with the random appearances of a horned creature that are usually played up for laughs, but with all of the pot smoking and spooky supernatural things going on, I wasn't all that bothered by the randomness. The version shown at Horror Hound Weekend was a screener, but it was made clear that it was as close to a final cut as a movie could get, so whether "The Black Waters of Echo's Pond" manages to sneak its way into limited release or just goes straight to DVD, it's certainly worth a watch.