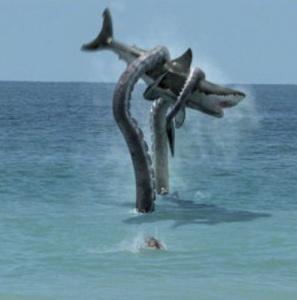 I’ve been boycotting Sci-Fi Channel, excuse me, Syfy Channel exclusive films for years now. I quickly learned that these films across the board sucked in a way no other films did. Occasionally I’d see a title in a video store and take a chance and go for it, only to be burned time and time again. “Blood Monkey”, “Ice Spiders”, “Yeti: Curse of the Snow Demon”, “Raptor Island”, all sounded so stupid, so horribly bad that I thought they’d make for an entertaining watch with some friends and some beer, only to be disappointed time and time again. When I first heard that a film called “Sharktopus” was being released, I was intrigued. It sounded exactly like what I was looking for, something so horrible it became amazing. But then I heard who was making it; Syfy. I was cautious, but took that risk one last time. And, for once, it paid off.

As you can probably deduce from the title, “Sharktopus” is about a half-shark, half-octopus hybrid causing problems during Spring Break in Mexico. Now this isn’t your ordinary, run-of-the-mill hybrid, this is a government created killing machine. A group of scientists, led by Eric Roberts, engineered the Sharktopus to assist the government in hunting down drug-runners and other stealthy, aquatic-based pest to national security (I don’t fully understand how a half-shark, half-octopus hybrid is better than, oh I don’t know, increased funding and better training, preparation and equipment, but I shut my brain off quickly after popping the DVD in). Unfortunately for everyone involved, the Sharktopus escapes after a speedboat hits the Sharktopus and damages it’s control system (apparently there’s some manatee in the Sharktopus as well). From there, the Sharktopus’ horny teenager sixth-sense kicks in and it heads south to Spring Break, where hilarity ensues.

“Sharktopus” is absolutely not a good film. The acting is slightly above amateur-level, the plot is pretty formulaic and predictable (you mean Eric Roberts is going to prevent the Sharktopus’ demise because he has money on the line?! How unexpected!) and the CG is the absolute worst I’ve ever seen. Seriously, the Sharktopus looks like the tentacle from “The Mist”’s ugly cousin. But you know what? It all works. Despite it’s flaws, or perhaps because of them, “Sharktopus” is an insanely entertaining film and easily the best thing I’ve watched for BGH so far in 2011.

There were so many different ways for this film to fail. It could have taken itself seriously and tried to present a non-tongue-in-cheek vision of a half-shark, half-octopus terrorizing a Mexican resort. It could have failed to deliver on the premise of that half-shark, half-octopus terrorizing that Mexican resort (I’m looking at you, “Mega-Shark vs. Giant Octopus”, I haven’t forgotten when I rented your sorry ass). Or it could have been so poorly made and produced that it became a boring exercise with occasional flashes of brilliance. Instead, we get an amazingly campy (both intentional and non-intentional) film that fully delivers on the promise of a Sharktopus messing shit up that’s so quickly paced and constantly entertaining that I know I’ll be pulling this one out again.

It seems like there was a lot of time and energy put into the writing and conceptualization of this film. While the actors and CG artists certainly slept-walked through this, everyone who mattered seems to have put a lot of time and effort in this. Given the many gags involving the Sharktopus in this film, it could have very easily gotten repetitive and boring if it just kept doing the same thing over and over again. Instead, every attack is different and, shockingly enough, pretty creative. I imagine there were a lot of meetings between writers brainstorming ways this monster could kill and create havoc.

This is actually the only place where the film sort of falters. There were so many different ideas for what this thing could do, that at times this film feels like a series of vignettes all involving the same creature. It’ll move from scene to scene sometimes with little transition or reason other than the fact that the Sharktopus now has to kill some people like this, instead of like that because some writer thought it would be funny. There are also some characters that are introduced solely to be killed off by the creature and whose presence really isn’t needed.

But again, who cares? All of these scenes made me laugh and were entertaining to watch. I’m sure there’s readers out there scoffing at the fact that I’m giving this film such a high score. But at the end of the day, who cares that this is a superficial, shallow, vapid film? It’s damn fun to watch and I know I’ll be pulling it out of the DVD cabinet sometime in the future to watch it with some friends. It might be horribly acted, have the worst CGI I’ve ever seen and makes no attempt to make any deeper statement, but it also has a goddamn half-shark, half-octopus running around during a fire dance (yes, it can walk out of the water) eating hula dancers and making Chewbacca sounds. And what more can you ask from a movie called “Sharktopus”?