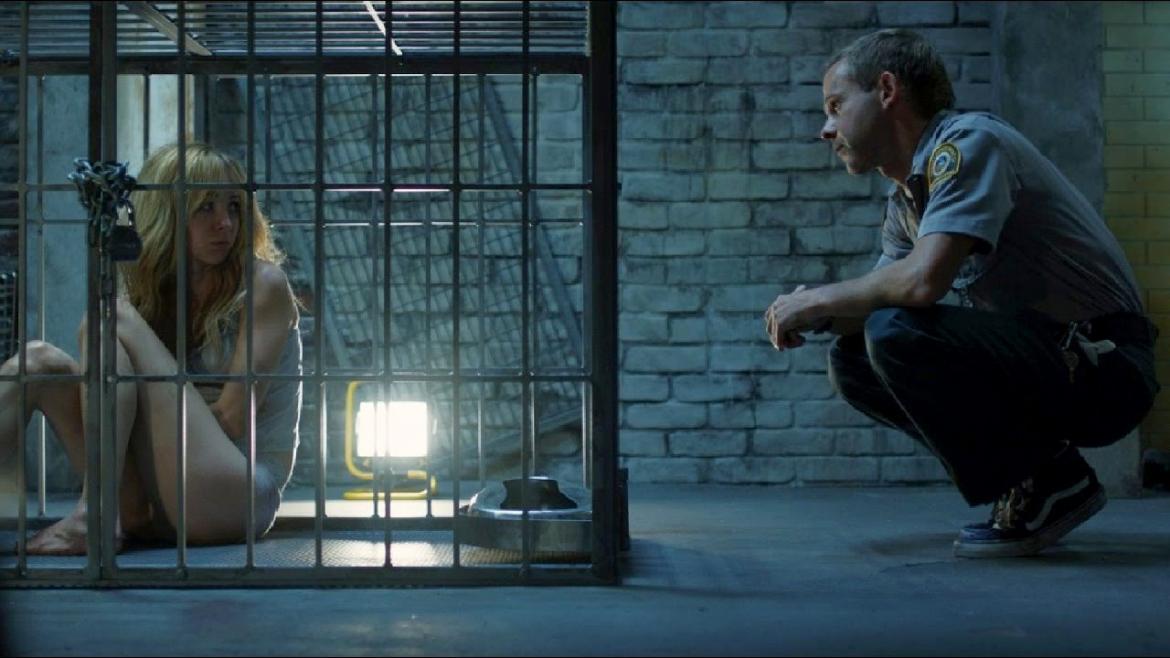 There is certainly no shortage of misguided misogyny within the horror genre and on first glance Pet could easily be tossed to the side as just another in a long line of offensive setups of a potentially disturbed man attempting to "save" his female obsession--and what better way to do so than kidnapping her and keeping her in a cage? In fact, for the first act, the film and Dominic Monaghan aspires for little else than a troubling male fantasy.

Then, just as you might consider cutting your losses and moving on Pet slowly starts to turn on its head. The captive situation at hand may not be what it truly appears to be and you slowly start to sink back down into your seat and settle in for the long haul--inching closer and closer as the mental cat and mouse games become more and more intense. The aforementioned Monaghan skillfully navigates the awkward and socially challenged, Seth, who bumps into, becomes obsessed with and imprisons an old crush, Holly (Ksenia Solo--what a name, right?). It might be a stretch to convince a reader that Solo's role is empowering considering she spends near the entirety of the film in her skivvies. However, while she spends the first act as your typical crying victim, she quickly attempts to turn the table on her captor and the mental gymnastics--while mostly simplistic--are nonetheless captivating.

Seth's motive plays along with genre conventions with few twists, but it's Solo who manages to do the impossible--carrying a movie while confined to a dog cage. Holly attempts to manipulate Seth with any tool at her disposal up to and including her sexuality looking for any weakness she can expose that will free her from the cage. This often leads to a word you could easily use to describe the film...trashy. Pet is unapologetic about its somewhat surface level low brow sexuality to tantalize characters and the audience, but director Carles Torrens and writer Jeremy Slater infuse it in a way that does not feel degrading or exploitative--due in large part to the "twists" that dare not be named.

Pet will not woo viewers with innovative visual styles or high brow mumbo jumbo--in fact the psychology is about as valuable as a judgmental self described psychiatrist who feels 140 characters on Twitter is more than enough to diagnose your personal woes. However, the film--billed as a love story--does win plenty of points with a fun approach that teeters liberally in the void between bad taste and playing it safe. Pet is neither high art or deplorable nonsense and the audience that's happy and willing to stomach even some of its most questionable choices will be delighted they stuck around to the bitter end.