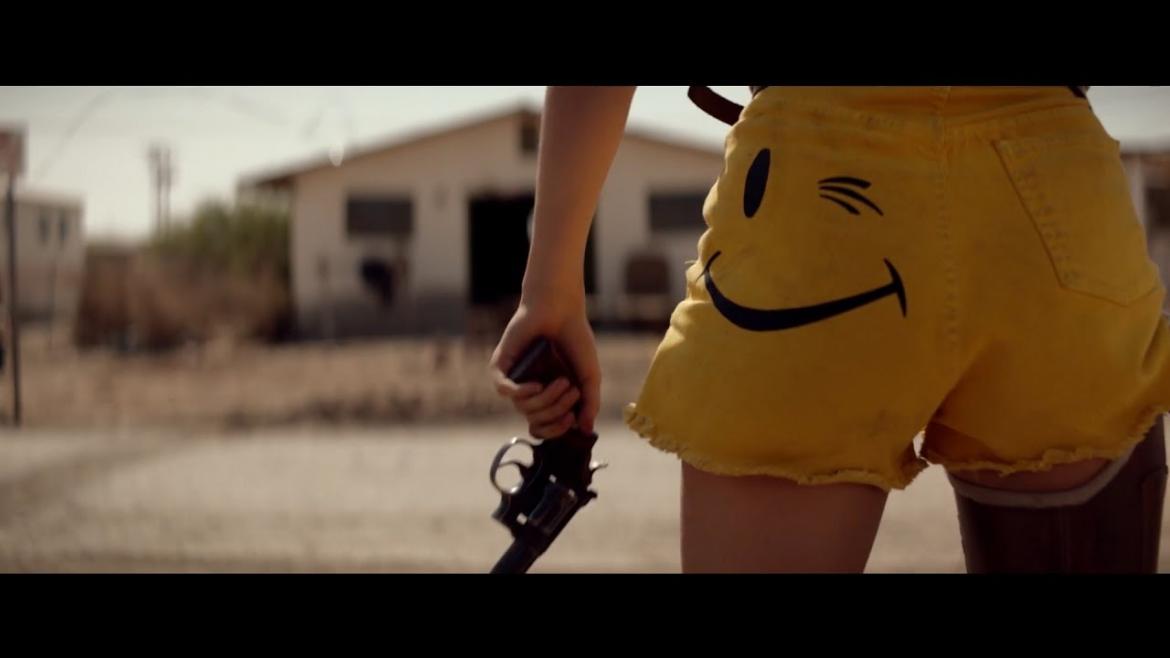 With a name like The Bad Batch and the movie that subsequently unfolds, it's not unfair to assume that the characters--perhaps even the director--are enduring some unfathomable drug trip. Instead, what Ana Lily Amirpour has constructed is her very own Mad Max story that combines her arthouse sensibilities with the grit and grime of a grindhouse flick.

The plot is thin, dialogue is minimal, but Amirpour is diligent and effective in her particular brand of visual storytelling. In The Bad Batch, a seemingly dystopian future takes individuals deemed unfit for society (referred to as "Bad Batch"), takes their personal affects, tattoos a number behind their ear (kind of like a prison inmate) and sets them on their way beyond a fence into the dry lawless wastelands of Texas to fend for themselves.

At the outset, we are introduced to, Arlen (Suki Waterhouse), a quiet seemingly innocent girl that doesn't seem like she belongs amongst the Bad Batch. Twenty minutes pass with barely any dialogue as Arlen finds out just how cruel and unforgiving life as part of the bad batch can be. As the film progresses the lack of dialogue becomes less a thing of note and more of an artistic choice as the dialogue that's there is just enough to give enough context and world building to fill in the blanks. Waterhouse holds the screen well as the flawed heroine that starts her journey seeking vengeance. In the process, Arlen's complexities open the door to a role as rescuer, but also the instigator of an awkward "romance" that blossoms like a dried desert weed with Miami Man (Jason Mamoa).

Revenge, romance and lots and lots of waking from place to place. There are essentially three locations in the film--the desert, a garbage dump, and a compound of bad batch residents known as Comfort--just one of many playful thematics in Amipour's holster. Comfort's 'mayor' if you will is none other than a man who everyone refers to as, The Dream (Keanu Reeves doing some weird Elvis-like impersonation). The Dream lives in a mansion within comfort with a stable of pregnant chicks wearing "The Dream is Inside Me" t-shirts, and freely gives away trippy drugs to the locals during raves like some sort of DJ fueled church service. Yes, as far as outcasts in a dystopian society it seems Comfort ain't too shabby. Arlen isn't a fan though and she sets off to right a wrong that she herself is responsible for. Which is about where the awkward "romance" starts kicking in.

By now you've got an idea of how weirdly indulgent certain aspects of The Bad Batch can be, but not how hilariously indulgent it gets. Lingering camera work and random shots like Giovanni Ribisi air humping in slow motion while watching two dogs gettin' it on. Little things like the magical dystopian hobo (played by a completely mute Jim Carey) that literally uses a wad of cash to keep a fire going. The symbolism and thematic elements are so exaggerated at times it can make your head hurt--but also charms the pants off those digging what Amirpour is laying down.

You'll need both hands to count how many times Waterhouse's butt is framed off-center wearing the short shorts with the winking smiley face, meanwhile Jason Momoa charges around on screen shirtless in silky white pants playing a cannibal with mad drawing skills and wicked butcher knife moves. Performances aren't really the name of the game, as Amipour sets such a minimalist tone only opening the characters to speak in simple terms--except for Reeve's The Dream, who is a walking fortune cookie.

The Bad Batch is artistic exploitation. A grindhouse cult flick from an up and coming director with a incredible visual eye itching for a bloated budget and open-minded audience that'll indulge her out-there ideas. Promising out of the gate but so thinly plotted that its story can't sustain the length. The Bad Batch is all at once weird, visually striking, ugly and in the end--like the dirt and grime of the desert--sticks on you whether you like it or not.