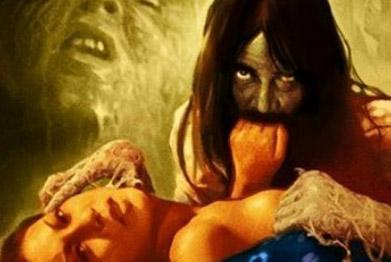 The sales pitch for “The Horrors of Malformed Men” includes the factoid that it has been banned in Japan for nearly 40 years. I’ll admit to being a sucker for banned material but this claim is a bit misleading. You see, a little digging reveals that the ban was studio imposed. Toei decided that despite an absence of public outcry, it was only a matter of time before the film offended someone. There is no doubt that the movie features subject matter that might have been less than palatable for 1969 Japan. But to call it a "banned" film implies some sort of proscription by public process or governing body; whereas this is mostly a case of the suits anticipating trouble and seeking to avoid it.

The story follows Hitomi Kousuke, a medical student whom we meet after he has been forcibly confined to an asylum. The place is populated mostly by hysterical women swinging wildly from ecstasy to homicidal craze. One night Kousuke is nearly murdered by a mysterious inmate but instead kills the man then escapes. On the street outside the asylum he meets a girl who is whistling a tune he recognizes from his mostly forgotten youth. The girl manages to point him in the direction of a remote coastal village before being murdered.

What follows is series of events that see Kousuke masquerading as his dead brother resurrected, then following the bread crumbs to an island where his father Jogoro has set about constructing a dystopian society of Freaks. Further synopsizing would be fruitless as one of the main problems with the film is it’s adherence to a formal storytelling structure. "The Horrors of Malformed Men" features a story rife with contrived “Aha” moments and convoluted character relationships that are all settled in expository fashion during the final moments of the third act. This may be the most ridiculously played-straight, Scooby-Doo ending I have ever seen.

I really wanted to like this film and give in to its goofy charms, but I think the problem is that it doesn’t really allow for this. It's a patchwork of intentionally humorous moments that aren’t well done as well as moments that are unintentionally comic, also because they are not well done. In the latter category the film’s biggest sin is in the depiction of the island of freaks.

This should be the obvious strength, but Ishii’s collaboration with counter-cultural performance art/ theater icon Tatsumi Hijikata (Jogoro) turns the world of freaks into series of campy set-pieces that play like a Japanese re-imagining of "Godspell". What could have been a joyous trip into an abyss of obscenity and aberration is instead a tepid, stagey selection of under-weird, over-lit interpretive dance numbers. I am no expert on the psychedelic cinema of Japan but I can think of at least two other films ("Godzilla vs. Hedorah"; "Matango") where the imagery was more memorable and equally unsettling.

Another aspect that makes Malformed Men less than fun is the misogyny at the core of its story. I know it’s like hunting for ticks to try and take umbrage with Japanese exploitation cinema around feminist issues, but it kept coming to the fore as I watched. Let me add that I love a lot of Jess Franco’s stuff including his reworkings of De Sade material, so I am not a prude when it comes to the treatment of women in film. But where Franco generally frames his females as victims of fate or devious architects of debauchery, this film affords them no such control or misfortune. Instead Malformed Men places the blame for all its nastiness at the feet of its gormless female characters. The innocent are killed, tortured, mutilated and then singled out as the reason why the men are vile and vindictive. And yet, even this might be overlooked if the film was just more fun. This brings me back to Uncle Jess as well as few other filmmakers that bear mentioning here.

Franco, Jodorowsky and Juan Lopez Moctezuma all come to mind when watching “The Horrors of Malformed Men”. That this film predates most of the best work of that triumvirate is probably only incidental. Even if it isn’t, there are qualities to things like Moctezuma’s “The Mansion of Madness”, Jodorowsky’s “The Holy Mountain”, and Franco’s “Justine” that may have saved Malformed Men. Fun is certainly a big shortfall here, followed by small things like framing, lighting, direction, scope, narrative balance, pacing (this thing both plods and sprints in places) and performance factor to name a few. Perhaps the lack of some of this is down to Ishii’s fanboy froth for Rampo’s work. Where Franco may leer self-indulgently into Lina Romay’s bush until it’s out of focus, you never get the idea he doesn’t know what he wants. With Ishii’s movie you have the feeling he never thought carefully beyond the coolness of getting the money to make a movie from the stories he loved so much.

If one separates out its elements there is a lot to hang your hat on with “The Horrors of Malformed Men”. Boobs abound, pre-Cronenberg body fusing, dismemberment, incest, smash zooms, soap opera melodrama, ridiculous music cues, the Dr. Moreau redux and even a little taboo bashing pubic hair are all good things. In addition, there is little doubt that the cultural subtexts of this film far outdistance its entertainment value. This might be a real find as a "2, 24 and 3" film. That’s 2 a.m., a case of beer (already inside you) and at least 2 other people to slur at during the movie’s slow points. As a solo flight, however, I can’t give it a recommendation. The film is just a lot like its much touted ban; an intriguing idea whose reality turns out to far less than advertised.