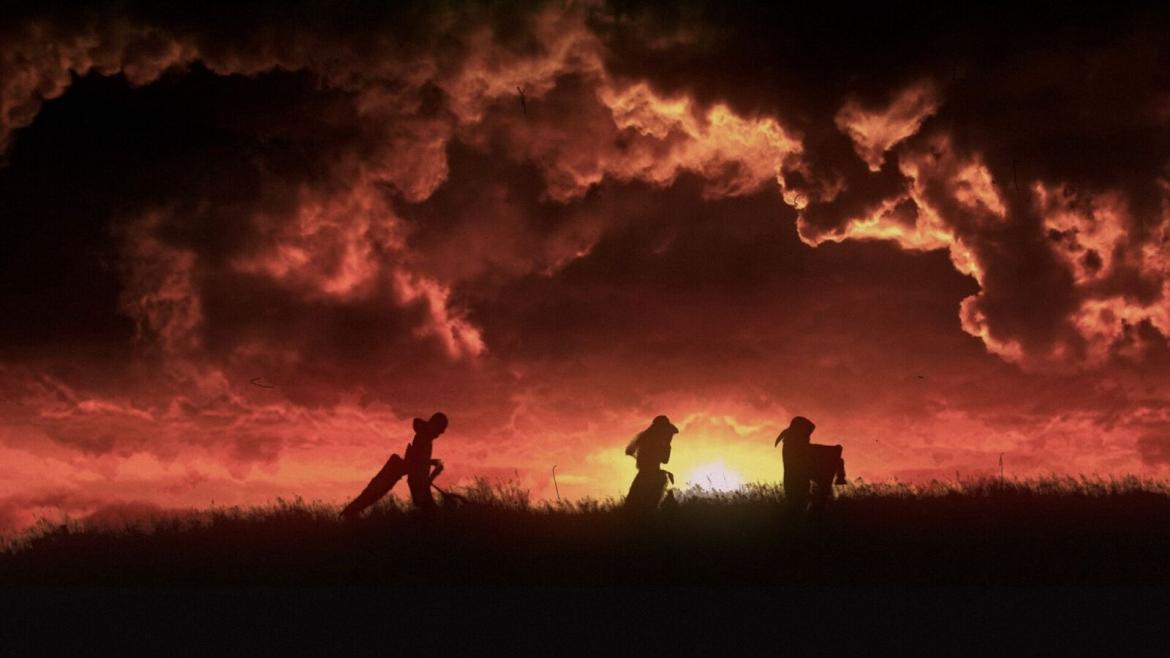 Recently Ciara Wardlow wrote a piece over at Film School Rejects exploring the intersection of fandom and cinephilia. The author’s focus is mainly on convergence culture and franchise product development, considering the ongoing relationships between viewers and diegetic worlds. While the difference between the two terms parses words to an extent the differentiation does provide a fruitful lens from which to look at the ongoing love affair filmmakers and show runners (maybe media-makers overall) have with that shrink-wrapped Kraft single sort of 80s cheese aesthetics.

Director/Writer Justin Seaman is clearly a fan of what the 1980s horror filmmakers have wrought. Invoking styles and tropes from Carpenter, Raimi, and a host of one-off cult classics, Seaman throws down his own power glove of a film in The Barn. Set in your nondescript Halloween-town middle America a pair of friends Sam (Mitchell Musolino) and Josh (Will Stout) set out on one last Halloween hurrah, sticking it to the uptight religious folks in town, partying with some friends at a concert, and relishing in the last gasp of candy & egging. All of this revelry is of course filled with booze and weed and accompanied by your standard troupe of genre characters including token black friend Russell (Nickolaus Joshua), aggressive but fun loving jock Chris (Cortland Woodard), his hyper-sexualized girlfriend Nikki (Nikki Howell), and Sam’s main crush Michelle (Lexi Dripps). But when the group inadvertently awakens a trio of demons named "The Boogeyman", "The Candycorn Scarecrow", and "Hallowed Jack" they gang find they're in for a goo-soaked fight to the death.

The Barn occupies that comfortable fandom niche for those of us who have survived the crucible of 80s video and theatrical horror. Saturated in orange hues, slithering green curse bolts, late night TV personalities played by none other than Ari Lehman, rockabilly, and drunkard locals Seaman’s film is comfortably at home in this genre playground. Knowing to rarely go serious, the film warmly embraces the hokey qualities of many of its predecessors, attempting to veer just outside Troma-level territory. The film’s extravagant gore and general irreverence are infectious for those who come with a similar sort of movie watching experience. For a large portion of the film’s second half we’re treated to an endless carnival splatter house that refuses to quit even by the film’s finale. These moments of goo, jack-o-lantern style lighting, and debauchery are where the The Barn finds purpose.

However, the film does struggle in its capacity to find an original voice in the sea of its genre references. Tending toward a buddy-hood in crisis flick rather than a final girl story, Sam and Josh’s relationship is saddled with the emotive weight of the film. Recalling Edgar Wright’s Cornetto Trilogy to varying degrees, the relationship between the friends works at its most congenial and ribbing but falters when narrative pressures are forced between the pair. The Barn also can’t get past the genre’s character types reducing Nikki to a twice breast close-up and Russell to the roll of “first victim” (despite Joshua’s charismatic turn). In an attempt to enrich the film’s mythology Sam is said to have a series of Halloween tradition rules he follows every year. And while these serve a narrative purpose the sincerity with which they are presented marks their derivative nature more shallow than the film’s whacky elements.

That the filmmakers behind The Barn are well versed in the world of 80s splatter-supernatura is apparent from frame one. It’s an admittedly exciting opening sequence that throws a sleeveless jean jacket on you while resting a pair of those paper 3D blue and red glasses on your eyes. You get a palpable sense of affection and fan appreciation from the filmmakers and if you have the cultural memory of such elements The Barn will not disappoint. Just don’t expect much more than a delightful, splatter filled rehash.