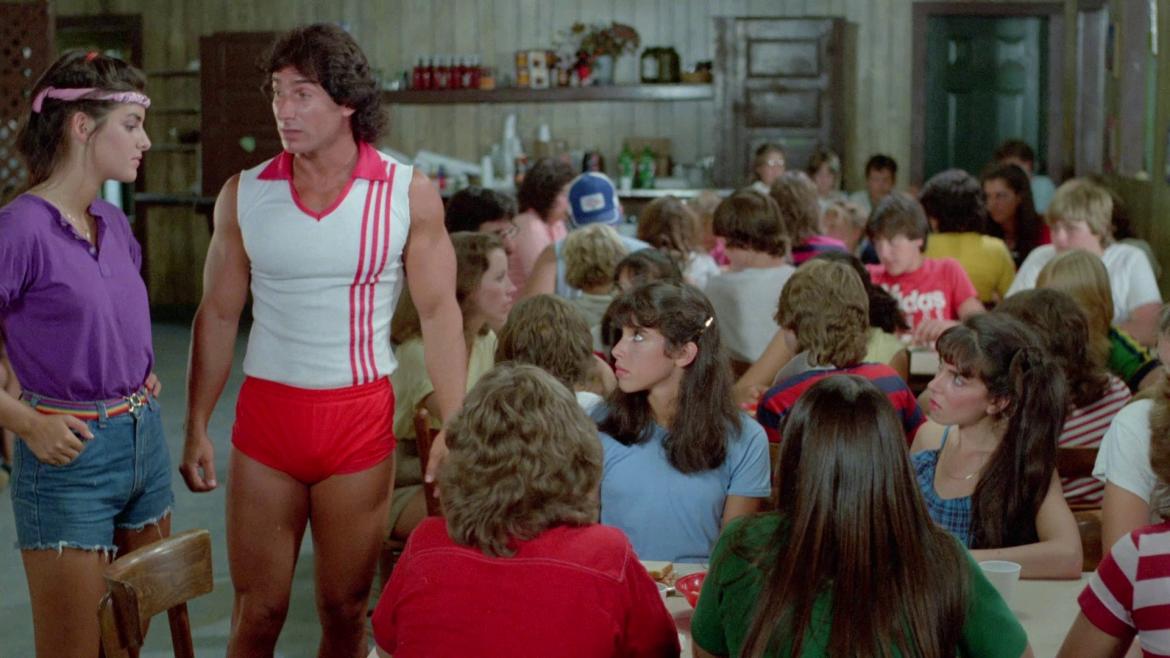 If the horror films of the 1980's are any indication of reality, attending summer camp was a nearly universal experience. At these camps, according to the movies, those sumer camp days were chock full of short shorts bordering on the obscene, borderline sexual harassment under the guise of "flirtation", and of course plenty of bloody murder. Like its tital would suggest, the 1983 cult classic, Sleepaway Camp, is one such movie, but it is so much more than that.

After some phenomenally 80's opening credits, during which a camera pans through a vacant camp over which the echoes of summers past can be heard, we get a truly baffling cold open. A father and his two young children float lazily on a tiny sailboat, while a nearby camp bustles with activity. A small speedboat with a jet skier in tow zip around, oblivious. A mysterious man on the shore calls out that the "Doc is coming." In a Final Destination worthy turn of events, the speedboat runs over the father and his children, leaving a body and a torn up life jacket in its wake.

Cut to: it's Angela's first summer at Camp Arawack and she is having a hard time fitting in. Despite having her cousin Ricky to show her the ropes, Angela isn't making any fast friends in her bunk, and the fact that she refuses to speak is not helping her case. The boys harass her, the girls in her cabin largely ignore her, and she has the incredibly stuck up Judy to contend with, not to mention a counselor who seems to make it her personal goal to bully Angela into submission. When campers, counselors, and staff start dying left and right, threatening to close Arawack down, the camp owner is eager to keep things quiet.

When talking about Sleepaway Camp from a critical perspective, it is hard to separate the movie from the overwhelming cult love for it, the absurd campiness (punintended) of the performances, and the knowledge of the truly ridiculous two sequels that followed it. Many people write this movie off as only having worth in terms of its insanity, but I think that allows this movie too little credit. While a great majority of the performances are unquestionably over the top and the plot includes some dream sequences (and a cold open) that create more questions when they were seemingly intended to answer this movie is not all low budget. The cinematography is actually really interesting, particularly a couple of shots of Angela, where tha camera seems to be just slightly abover her, and her face is framed off center, with tons of dead space above her head. What initially looks like an accident or slip of the camera takes on a sort of disjointed feel upon further viewings.

This movie also deserves credit for its practical effects work. From the kills themselves to the bodies the killer leaves in their wake the film creates some pretty disturbing and memorable visuals. Without giving anything away, the finale alone is a feat of practical effects that looks just unnatural enough to be incredibly unsettling.

All of humanity can be divided into two categories: those who have seen Sleepaway Camp, and those who have not. No matter which camp you fall into, however, this movie is a genuine delight and seems to only get better with each successive viewing.

Editor's Note: Keep your eyes peeled later this week for the latest installment in our Thirsty Thursdays series, where we will finally cover Sleepaway Camp!