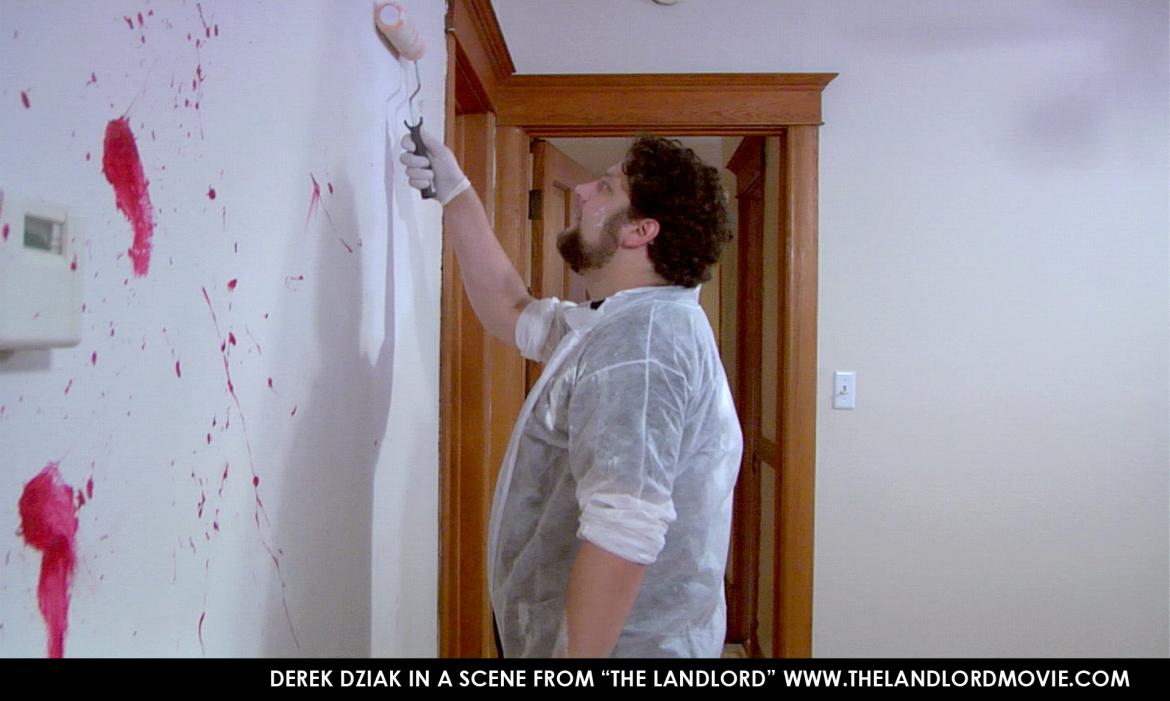 You know, maybe I’ve been wrong about microbudget horror-comedies. I always approach them with a sense of dread, steeling myself for a collision of tired horror clichés, bad special effects and unfunny comedy, but something strange has been happening lately. I’ve found myself genuinely liking quite a few of these quick and dirty credit card jobs. In recent years movies like “Special Dead”, “Murder Party” and “36 Pasos” have done a better job of combining laughs and scares than just about any big budget horror comedy not directed by Sam Raimi. You can add Emil Hyde’s “The Landlord” to that list as a fresh and original take on the lighter side of devil worship, vampire street gangs and real estate, made on a $20k budget.

Tyler inherited a three unit apartment building from his parents. It’s a nice place: roomy, nice location, low rent. The only downside is it’s also home to an ancient dog-faced goddess and her demon lackey and they tend to possess, kill and devour the new tenants before the ink is dry on the lease.

Tyler finds himself caught between satisfying the unending hunger of his demonic guests and dodging the suspicions of a couple of cops who have noticed the high number of renters who move into the flat but never move out. Fortunately, he has help in the form of his sister who is also a cop and has a few dark dealings of her own. She’s having an affair with her partner and they both have a special deal with a gang of vampires who roam the town. They tip off the vamps to the home addresses of known baddies and, in exchange for freedom from prosecution, the vampires raid the house, kill everybody and deliver any cash, drugs and valuables back to the cops. It’s a Vic Mackey style win-win situation.

Things change when a cute small-town refugee shows up at Tyler’s doorstep. She rents the apartment, they hit it off and Tyler decides that he’d prefer she not be eviscerated and devoured. What he doesn’t know, though, is that she is pregnant and on the run from an ex and newborn human baby just happens to be a delicacy for demons.

It’s quite a complicated plot and where the movie stumbles is in being a bit over-ambitious. In particular the whole vampire subplot is extraneous and confusing and feels like the plot of a completely different movie got mixed up with this one. If I’m forced to choose, though, I’ll take over-plotted and confusing over boring any day.

Despite the kitchen sink plot, there’s a lot of good character work going on here. The acting is a notch or two above what you typically see in this type of film. In particular, Derek Dziak (Tyler) and Rom Barkhordar (the demon Rabisu) show some impressive comedy chops and their interactions are a fun twist on the old Odd Couple love-hate roommate relationship.

Special effects are always going to be a tricky spot on any movie that jams econo and in “The Landlord” the effects get the job done but they aren’t pretty. I can forgive bad CG of a building exploding and even the tint shifts during the magic scenes that are a star wipe away from being straight out of an 80s public access show but the make-up work on the demons is frankly pretty bad. In an age when you can find professional-looking make-up effects at Halloween costume parties it’s inexcusable for a film to have its two main monsters looking ridiculous. To be fair, the make-up might be yet another symptom of the movie’s ambition outpacing its funding. It takes an extraordinarily skilled artist to make a woman with a dog’s face not look silly. A more conservative and easy-to-pull-off concept for the demons would have made the budget limitations not stand out quite so much.

It might falter in some points, as is to be expected for a used car priced film from a first-time director, but overall “The Landlord” delivers. It’s an enjoyable little flick that earns a few laughs, tells an original story and does an admirable amount of world-building for such a modest production. I’ve long been a skeptic of the “digital revolution” in which anyone could be a filmmaker but if horror fans keep turning out perfectly entertaining movies like this while the studios pump out lifeless remakes and trend-chasers, then microbudgets like “The Landlord” might just be the thing to give horror movies a new lease on life.