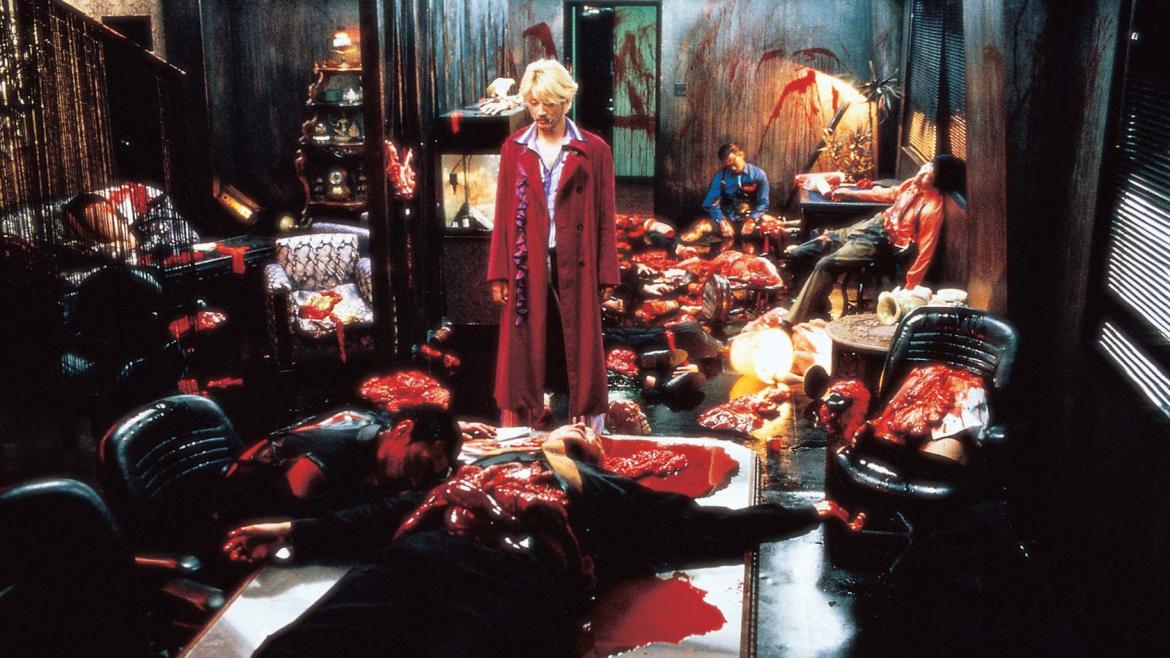 There are a number of ways that a filmmaker could showcase the joyous occasion of a sadist and masochist finding each other; most of those versions would probably include handcuffs and whips. But this is a Takeshi Miike film, so the norm just won't do, even when it comes to already taboo subjects like sadomasochism.

With Ichi the Killer, Miike gives us that sadomasochism to the extreme, through the lens of a crazy tale of dualing Yakuza gangs. When the head of one gang, Jijii (Shinya Tsukamoto), unleashes Ichi (Nao Omori) upon a rival faction, killing it's leader, the gang's 2nd in command, Kakihara (Tadanobu Asano), is just as excited by the prospect of there being a masochist extreme enough to inflict the level of pain that he craves as he is determined to exact revenge for the murder of his boss. As the movie goes on, amassing a huge kill count via some truly out there violence, it becomes increasingly clear that this collision of forces is all part of a master plan in which manipulation of psychoses is the name of the game.

Ichi the Killer, is absolutely insane. It's based on a manga series, and the colorful cast of characters is the writing on the wall (most likely written in bodily fluid) to demonstrate that. As with most of Miike's work, really nailing down the specifics of what he's trying to say with the movie is difficult; it's not quite clear what he's trying to get across about sadomasochism on a symbolic level, but the pure spectacle of throwing Ichi, with his propensity to burst into tears shortly before going full-on slasher on rooms full of Yakuza thugs, and Kakihara, with his Glasgow smile and knitting needle weapons, into the ring together is undeniably entertaining enough to be worth the price of admission. While many filmmakers would depend on this spectacle to sell the visuals of their movie, Miike imparts a skilled visual flair to proceedings. The color palette, for example, would be right at home in most Giallo films. And, if you're curious where Tarantino got his inspiration for the ultra-violence of Kill Bill, this is it.

Ichi works on multiple levels. For fans of splatter there's splatter aplenty, and it ranges from hilarious to cringe inducing. While truly coming to a conclusion about what the movie is saying is difficult, there are a number of thematic elements present for those that like to dig deeper into films than severed jugulars and bisected bodies.