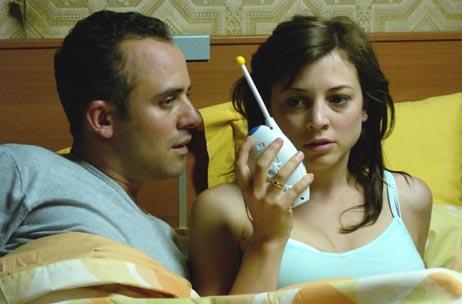 Staying their first night in the new house, they decide to use the new baby monitors. Having put their baby to bed, the husband begins to negotiate sex and while he is failing to get anywhere quickly, they hear their child laughing through the monitor. Believing this to be strange, they listen closer and hear a second voice that is not their child's.

The husband startled but not shaken, goes out the next day and buys a state of the art baby monitor that lets you record your baby's every movement. This new monitor is a small television where they can watch everything that happens. The problem seeming to be resolved, the couple goes to sleep, but Juan wakes in the middle of the night to see a man sitting by crib with his hands clasped in his lap. Juan wakes his wife and the couple rush into the room to find no one there.

The couple logically assume it is a thief who snuck in at night and buy a security system that detects motion and also has a panic button. Because the husband is the only one that saw the man in the baby's room he is much more paranoid than his wife. Annoyed and upset with Juan's new found obsession with finding out who was in the baby's room, Sonia leaves to stay with her mother, leaving Juan alone in the house. Still hearing voices despite being alone in the house, Juan checks into a hotel, but curiosity draws him back to the house.

The first ten minutes of “6 Films to Keep you Awake's” “The Baby's Room” are completely misleading, showing a sequence that has absolutely nothing to do with the rest of the story, except that it took place in the same house. In comparison, they look like two different films spliced together to add length to the 77 minute film. The lighting is washed out and colorless showing a sequence of a boy who, while playing hide and go seek, decides to take refuge in the house next door to the orphanage. There, he finds a radio, which appears later in the film, but has no thematic function and adds no solid depth to the film, if anything it makes it more confusing. The conflict between Juan/Sonia and Juan/himself is interesting enough to carry the entire film that I completely forgot the first part even happened, until an older woman shows up with the radio towards the end.

Writer and director Álex de la Iglesia would have had a near perfect piece if he had ratcheted the psychological paranoia that Juan develops as the film goes on up to 11. Instead they use the ghostly aspects from the beginning sequence and the old woman, who has kept the radio all this time, as a way to move the action sideways instead of forward. Juan begins to look for answers from the woman, but she has no new information to give and while she constantly watches Juan battle with his house from the outside, she thins the plot out where more tension could be added with Juan and the outside world. Despite all of these pitfalls and a rather flat ending, I did really enjoy this film.

I'm most likely biased because it is obvious writer/director Álex de la Iglesia and cowriter Jorge Guerricaechevarría had Richard Matheson in mind when they were writing “The Baby's Room”, as the entire film is an exercise in paranoia and building of tension. I even found the television baby monitor to be quite effective as Juan can see things that aren't there through in real life, reminiscent of the only scary part in the “House on Haunted Hill” remake. There are also some easy comparisons that can be made between this film and “The Shining,” but “The Baby's Room” decides to take a new route, removing the family from the house and taking an interesting, although not quite earned, leap into physics theories.

“The Baby's Room can be viewed as a film describing male feelings of inadequacy. When Juan's wife refuses sex the first night they are in their new home, they immediately begin to hear voices, and later, Juan is the only one to see the man on the baby monitor. This feeling of inadequacy that he can not keep his family safe or please his wife in bed, drives Juan to become paranoid, which in turn drives his wife away from him leaving him alone in the house. Most supernatural films tend to be male focused ("Poltergeist", "The Exorcist", "The Shining"). Many of them in some shape or form show men having to come to terms with what “being a man” actually means and how this relates to the male role within the family unit, and what better place to do that than in the baby's room?