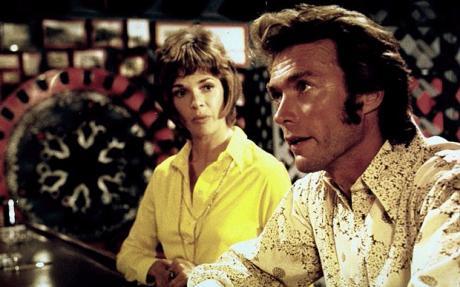 Play Misty for Me (Movie Review)

What’s fascinating about Play Misty for Me looking back on the history of stalker films, is that it was one of the first. Typically, Basic Instinct and Fatal Attraction are the two go-to films for this genre, mainly because they’re more in the cultural consciousness and amped up the insanity. However, this directorial debut for Clint Eastwood was an impressive depiction of his skills as a director of actors. While the film doesn’t do much visually to entice the viewer to stick out the run time, the chemistry between Eastwood and Walters is fantastic. In fact, the performance by Jessica Walters as the insanely devoted radio fan makes this film required viewing.

Dave (Clint Eastwood) is living a good life. Every night he hits up his favorite bar before heading to work as a late night radio DJ. During the day he spends his time writing in his home by the sea in Carmel, CA, with the occasional female guest to keep things interesting. Despite his slow and somewhat humble lifestyle, Dave has his fans from working in the public ear. One listener, constantly calling in to ask “play Misty for me”, has caught Dave’s attention. After meeting in a bar one night, the mysterious listener known as Evelyn (Jessica Walters) reveals that she had worked hard to actually meet her favorite DJ. Cool, calm, and sensual, Evelyn seduces Dave and they share a night of passion. As the days after unroll, Dave realizes that Evelyn is not as “cool” as she first put forward. Now, Dave has to find a way to end his relationship with Evelyn before she harms anyone to be forever his number one fan.

This first attempt at directing from Eastwood is a solid one; there are no moments that make the viewer step out of the experience to remember that this is technically amateur work. The visuals do take chances with fade in and out effects overlaying seaside landscapes, but if the aesthetic is too melodramatic for some viewers it doesn’t happen enough to damn the experience. What works fantastically is the performance by Jessica Walters as Evelyn. The first time her voice is heard over the radio, it instantly strikes the viewer that this is an important, intriguing character. She is able to switch from sweet and sly to controlled insanity within seconds. This is a mechanic of her performance that is used several times which is accented by the startled and overly concerned response from Eastwood’s performance. It makes the viewer feel for this DJ that was just going along with what he thought was a fun one-night stand.

An interesting aspect to the film is that it builds in a different way from other thrillers of its type. Evelyn is depicted as unhinged fairly soon into her introduction which makes the entire film feel tense and ready for explosion by the time the third act rolls in. Usually there’s a good amount of time trying to get the viewer to sympathize with the aggressor before their true intentions are revealed, but Eastwood made sure to define her psychopathy within the first act. It was a risky choice to make the relationships crystal clear, but it works and makes it a worthy viewing experience even for modern audiences.

While Play Mist for Me isn’t groundbreaking in its narrative or visual style, it’s a solid experience that will satisfy an thriller fan looking for strong performances.