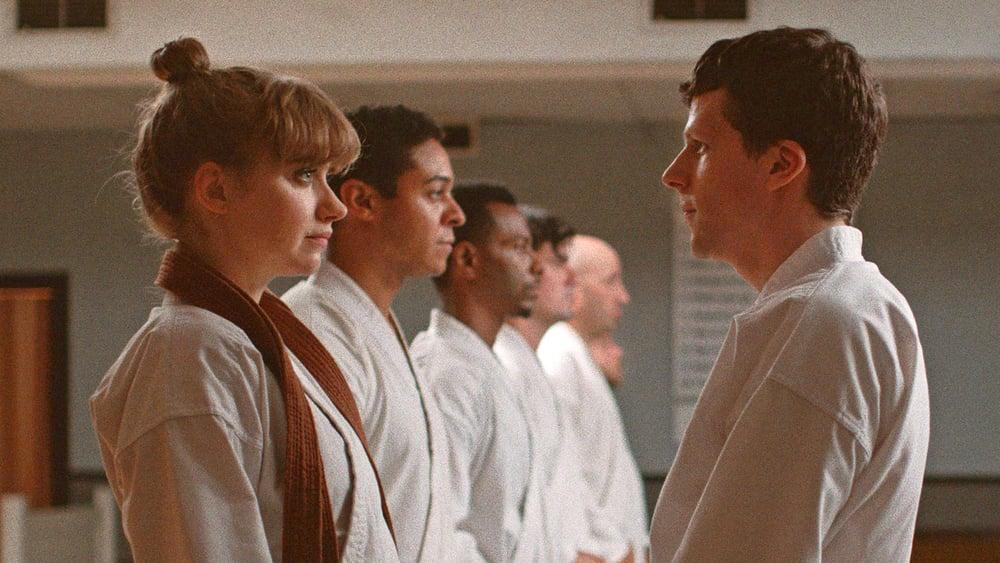 Riley Stearns's The Art of Self-Defense multi-hyphenate follow up to Faults is part dark comedy part horror/thriller wearing the mask of a dark comedy about toxic masculinity. The film may not always rain down brutal karate chops intent on emasculating the masculine, but it's ironic approach succeeds at highlighting the sad approach of those clutching their testosterone rich genes with an abnormal intensity through the shade of dark monotone comedy; never shielding the audience from the tragic horror underlying it all.

Casey (Jesse Eisenberg), a meek office accountant, is mugged and viciously beaten by a roaming biker gang leaving him afraid to even leave his house. When he does, he passes a dojo and enters, intrigued by the possibilities learning such a discipline could offer. The Sensei (Alessandro Nivola) of the dojo takes Casey under his tutelage, in the process introducing him to the underground class which is dripping with extreme masculinity and threatening to poison Casey's perception of human interaction.

Stearns' film takes place in a world of absurdity. The diegetic world and the language used by the characters is firmly outside of reality and takes place in a time period that cannot be pinned down. The script brilliantly encapsulates male dysfunction while uniquely scoffing in amusement with its biting social commentary. The dialogue speaks volumes, while the audience can read so much more between the lines depending on their stance on the issues in question. Wickedly contemptuous exchanges in regard to gun ownership, music choices, and gender politics provide a dense uneasy fog of modern anxieties that remains captivating from beginning to end.

Eisenberg plays a similarly robotic character to his portrayal of Mark Zuckerberg in The Social Network, but with a distinctly different style. Casey is ripe for indoctrination to a toxic lifestyle and Eisenberg's performance gradually adopts a learned aggression that doesn't feel natural for him. This plays well as the film develops and he begins to play off of Anna, played by Imogen Poots. Her inclusion in this male dominated dojo provides the film with a broader perspective, emphasizing the unfairness mirroring all too real issues we've seen play out for quite some time.

Everything in The Art of Self-Defense feels purposeful. From the tone, to the undefined time period, to the off-kilter, eccentric dialogue; these attributes all carry the weight of Stearns’s overarching themes. The film's progression of events goes from dark to darker while never losing its sense of humor. The underlying tragedy of it informs why this could be read as something of a new sub genre in horror. Stearns style is what combines everything to make it infectious and endlessly entertaining, to the point where the vision seems singular and something only this filmmaker could pull off with such disparate elements.

The Art of Self-Defense brilliantly weaves its dark comedy into a cautionary tale of growth at a cost. By adopting a mocking sense of humor toward masculine identity the film is an essential satirical kick-in-the pants for the time. What Riley Stearns has accomplished is nothing short of fascinating and feels like it could have gone a step further to belittle toxic masculinity, but as it stands this is still a Mortal Kombat-esque haymaker that'll rattle around in your noggin for quite some time.

Screened as part of the Fantasia International Film Festival 2019.