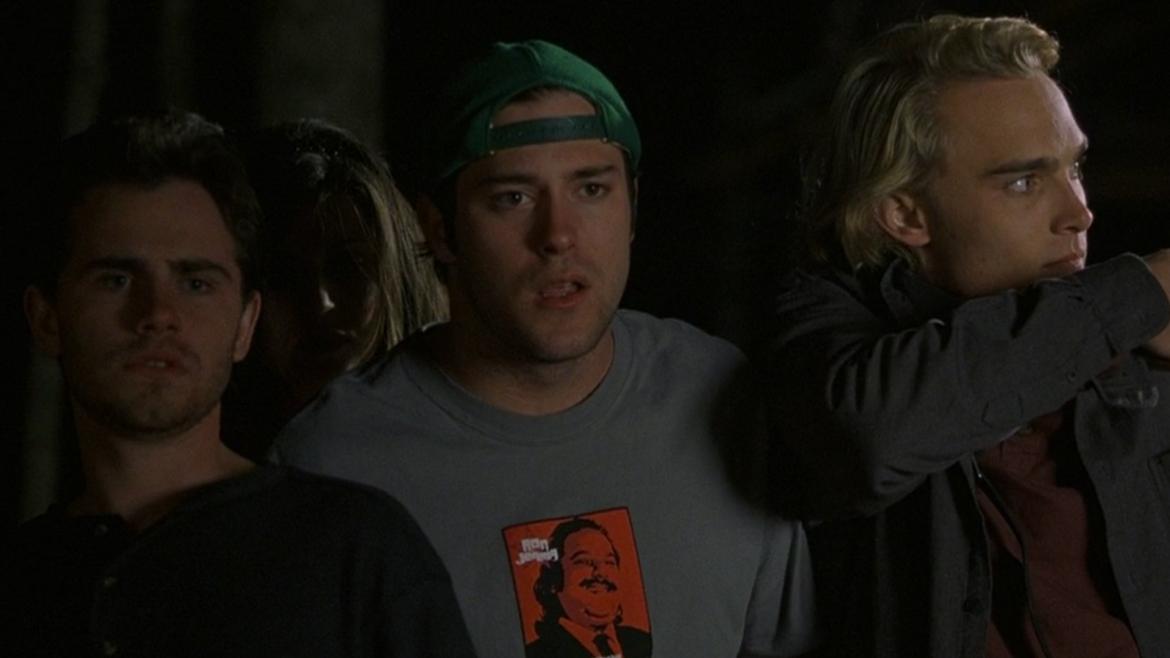 Name the movie: a group of young adults head to a cabin the woods in search of a good time only to find the exact opposite. There’s a mountain of horror flicks that could apply to, but in this case it refers to Eli Roth’s 2002 breakout hit Cabin Fever. Clichéd as its initial premise may be, Cabin Fever is still able to distinguish itself. Part of this is because it gave horror a beloved spokesperson/punching bag in writer/director Roth. More importantly though, the film is memorable because of its style: a fun if not occasionally tiresome blend of slick visuals, copious gore, and an unbridled and irreverent sense of humor.

Initially our leads all seemingly fit into traditional horror archetypes. There’s dorky nice-guy Paul (Rider Strong), reserved nice girl Karen (Jordan Ladd), asshole Bert (James DeBello), group-leader Jeff (Joey Kern) and his eye-candy-and-nothing-more girlfriend Marcy (Cerina Vincent). However, once that “exact opposite” we mentioned earlier befalls the group, everything starts to change. It arrives in the form of a highly-aggressive flesh-eating disease carried by a local hermit and is passed on to the group via the cabin’s tap water. As the group tries to deal with the disease, our initial assessments of the characters are revealed to be less-than accurate. Roth and co-writer Randy Pearlstein gleefully subvert the genre expectations coded into their characters. Example: Marcy. As other leaders prove themselves unreliable, she steps in. Not only is she the first one to go off in search of help, but she finds time to manage conflicts and handle all of the cooking. Each of the main five characters ends up similarly more nuanced than one might expect from a film like this.

Trouble is, Roth and Pearlstein can’t seem to let any of their characters exist strictly in the background. Side characters who are either mostly pointless (Dennis, the bite-happy kid who sits outside of the general store) or at best a plot device (Deputy Winston) end up with big showcase moments. Sometimes multiple such moments. These characters get played for laughs and, while Cabin Fever does work as a black comedy, they both are more absurdly goofy than anything else. Winston (the delightful Giuseppe Andrews) is memorable, but he’s also this weird tonal anachronism.

Roth brings a visual swagger to the film that’s certainly impressive considering it’s his first time out. He wears his genre influences on his sleeve, paying tribute to classics such as Night of the Living Dead and Evil Dead – beyond just the cabin-in-the-woods set up. He does occasionally succumb to his sophomoric streak, at one point allowing the camera to linger for an extended period of time on Marcy’s backside.

He’s also smart enough to spend his meager budget surrounding himself with talented people. His cast his very good. Each member of the main group handles their shifting responsibilities with ease. Even those supporting players who Roth – maybe needlessly – decided to thrust front and center succeed. He also leverages the impressive skill of K.N.B EFX Group to provide the movie’s memorable and bountiful gore effects.

Cabin Fever is a fun and savvy genre effort. Everyone one both sides of the camera is doing such commendable work that the film can be forgiven for a few suspect plot points and for occasionally indulging some of its dumber tendencies. It’s essential viewing for gore fans with a taste for gallows humor.