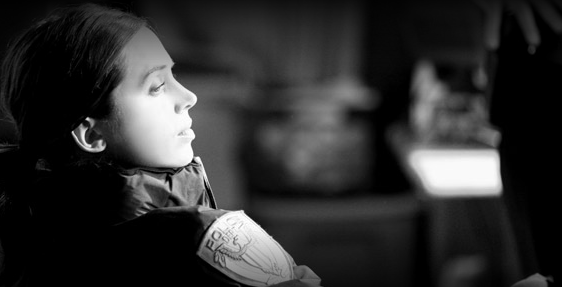 Note: I saw this film at a pre-release screening in Rochester, NY. To read my take on the screening experience, visit my blog.

Five years ago, while attending one of my first horror conventions, I was handed a promotional (cardboard) wristwatch for Fox's "Tru Calling," a new (at the time) television show starred the lovely Eliza Dushku. The premise of the show was part "Early Edition," with a pinch of "The 6th Sense" added for spooky flair. It was canned before finishing its second season, much to the dismay of a handful of faithful "Buffy" fans. Luckily for them, the ghost of Tru Calling has been reincarnated in the form of Rob Schmidt's, "The Alphabet Killer."

On paper, "The Alphabet Killer" is (very) loosely based on a set of unsolved murders that occurred in Rochester, NY in the 1970's, then dubbed the "double initial murders." In each case, a young girl with matching first and last initials was raped, killed, and left dead in a town who's first initial matched theirs. The primary suspect in the case committed suicide before he could even be questioned, and was absolved of all association via DNA testing in 2007. Most of those details are included in some form or another in the film, but that's where the similarity ends.

"The Alphabet Killer" focuses mainly on Megan Paige's (Dushku) search for the killer, through the lens of her schizophrenia. After initially becoming involved with the case, she begins to have "hallucinations" of the deceased, ending up hospitalized after a botched suicide attempt, only to return to the case after being "cured." It's to be noted here that if you were looking for any sort of insight or information about the real murders, you're shit out of luck. This film, as admitted by both the director and the writer, is all about (wo)man vs. him/herself, and not about shedding light on these as of yet unsolved murders.

That's not to say, however, that "The Alphabet Killer" shies away from crime drama. Aside from the occasional 'ghost girl' spookiness, many aspects of the film, including the questionable dizzying camera work, could have come from any given episode of CSI. All of the the crime drama staples are present here, from the pridefully useless local police chief to the dickhead cop with a heart. In her search for the killer, Megan is lied to, laughed at, and accused of erratic behavior. Her 'disease' could have been just as easily been replaced with alcoholism, or some other to strip her credibility, no matter how right she may be.

The made-for-tv feel of this film is not helped by the fact that Eliza Dushku, bless her beautiful heart, is not the world's greatest actress. There are moments in the film where she comes off convincingly as someone who is trying to put on a strong face while feeling weak, but the positives of her performance are completely undermined by some of her wacky "tweaker" moments. I understand that she's supposed to be 'crazy,' but there are ways to show that she's sick without the painfully awkward twitching. Cary Elwes is just fine as Captain Kenneth Shine, but his forced psuedo-Brookyln accent was distracting to me. In both cases, I'm not sure if acting or directing was to blame, but either way, it didn't feel right.

One of the aspects of the film that did feel right however, was the portrayal of the city Rochester. Although I was a bit befuddled as to why the characters were written to believe that the surrounding suburbs of Rochester were so far removed from the city, I think that Schmidt was able to capture the city's bleakness visually. A majority of the film has a blueish gray color cast over it, which should be familiar to anyone that has lived or spent an extended period of time in the Flower City. Although not everything was shot in the area, there were enough landmarks to give this film a sense of place, which helped add a small degree of variety to an otherwise by-the-numbers execution. Also, it should be noted that I did jump at a few of the jump scares, but only because they were so scant throughout that I truly wasn't expecting them.

Overall, "The Alphabet Killer" is to me, neither horror nor cop drama completely, but a somewhat muddled mix of both. In choosing to abandon the time period and some of the key aspects of the case, Schmidt stripped away some of the meat that could have made this film more than a spooky hour and a half long episode of CSI. However, as noted during the Q&A session after the screening, an unsolved murder case in a relatively little known city isn't any more salable nationwide than the Discovery special that was aired on the murders in 2001. Unfortunately, neither is a half-baked supernatural crime drama. As a film, "The Alphabet Killer" is neither striking nor aggressively bad, but as a horror film, I would classify it as a definite pass, unless its reincarnated as a TV movie that you can watch for free.