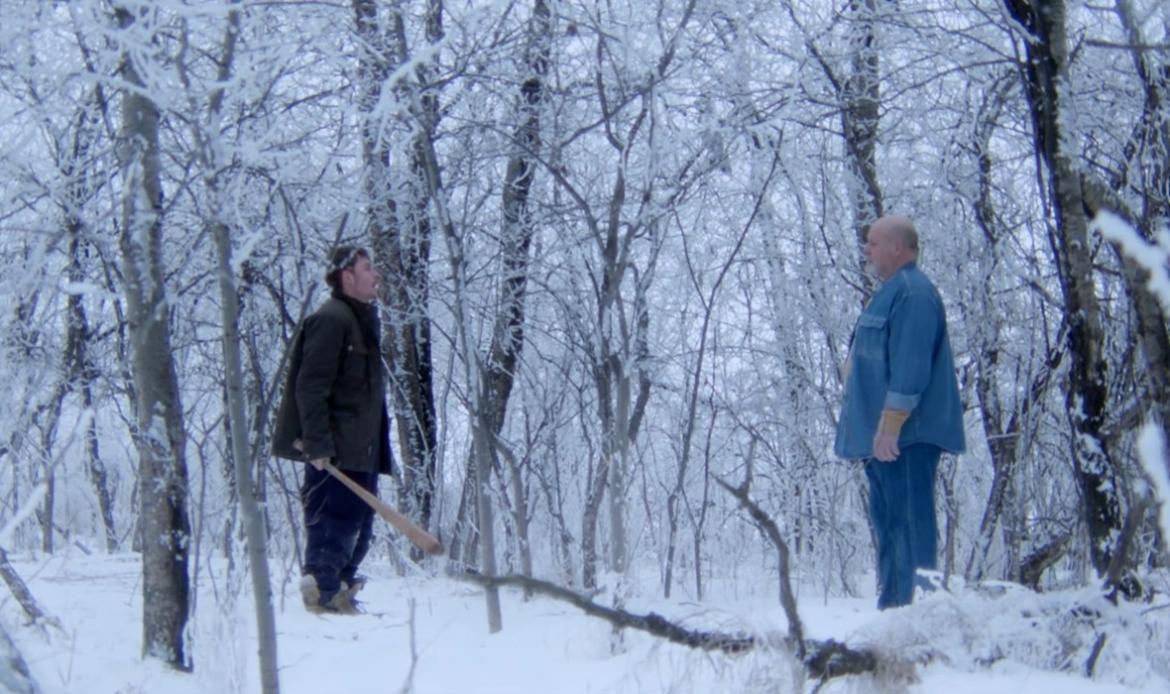 Did you ever watch Home Alone and think to yourself, what if Harry and Marv were super creepy and angry pedophiles who instead of wanting to make a quick score from empty rich people's houses had more nefarious goals? Well, do I have the movie for you.

In some ways the movie in question, Knuckleball, seems to have almost been inspired by the YouTube video that added blood to some of the most painful traps in Home Alone. Except, instead of a whole house of horror it's essentially one main trap and then a lot of improvising as our protagonist, Henry (Luca Villacis) evades his attacker. The film follows the aforementioned Henry as he's dumped in the middle of nowhere to stay with his grandpa Jacob (Michael Ironside) while his parents head off to a funeral that they've used as an excuse to get some alone time. As luck would have it, after a day of working in the cold and snow Jacob passes away overnight leaving Henry with a dead cell phone (he forgot his charger at home) in the middle of a snowstorm. He tries to find help by trekking to Jacob's neighbor, Dixon (Munro Chambers), with whom Jacob seems to have had a strange history. Henry realizes quickly that Dixon is not the friendly neighbor he was hoping for and now that Jacob is out of the picture Henry finds himself in a fight to ward off Dixon's attacks.

Knuckleball is wonderfully tense and full of thrilling cat and mouse chase sequences that are preceded by a super chilling sequence between Henry and Dixon as Henry and the audience realize Dixon's intentions. The depth to Dixon's unhinged behavior and motives slowly unwraps over the course of the film's runtime, though not much time is spent letting the revelation sit with the characters and audience. In fact, the last act's implications upon what we know of characters should feel much more impactful than it does, leaving one to believe that the nature of the reveal isn't as important as the film wants it to be.

Munro Chambers as the film's antagonist oozes with villainy in a way that will make people's skin crawl. His introduction seems innocent enough, but the layers deteriorate rapidly as the next time we see him he's watching and smiling at the sounds of a screaming woman before answering the door as Henry is seeking help. The exploration of Dixon's psyche is something that could have used a little more developing. After Jacob's death we see moment that he imagines Jacob taunting him and seemingly giving him motivation. The sexually violent implications only come in from time to time before the film makes those intentions abundantly clear in the last act. Still, Chambers shouts and screams around on scream effectively through the traps and tricks Henry throws at his character including multiple blows with baseballs. The film is called Knuckleball after all...

At one point Ironside's character tells his nephew not to learn how to throw a knuckleball because the movement is too unpredictable. Like the unconventional pitch Michael Petersen's Knuckleball lobs up a story that zigs and zags as it heads to home, but similarly also lands, by design, softer than the other weapons in the arsenal.

Screened as part of the 2018 Fantasia FIlm Festival.

Bleed with Me (Salem Horror Fest)