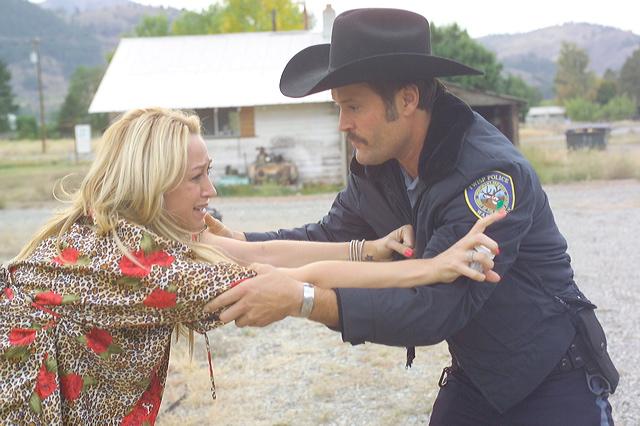 You can tell a lot about a film by the way its packaged. When sending along a film for review, some companies will take the "less is more" approach, by sending along just the DVD in a generic case and maybe a press release to go with it, letting the viewer do the work. Other companies will give you absolutely every piece of information they can on their film, hoping that something sticks out as worthwhile. This is usually a telltale sign that there's something to hide, and as it turns out, the essay on the back of the DVD case for "The Absent" is even more telling than I could have ever expected.

"The Absent" is, as one would guess, a psuedo-slasher based around a torrent of high school intrigue. However, it takes quite a while to get to anything resembling a high school, as the viewer is presented with a lengthy segment detailing a small child murdering his mother and father by mixing in rat poison with their breakfast. The ensuing montage clues us in that the once doe-eyed boy grows up to be a tattooed, grimacing, bad ass murderer guy. Once the backstory is laid out, we fast forward to the present day where "secret brain" Katie is embroiled in a passionate affair with her hunky high school teacher, who just so happens to be the brother of the aforementioned parent-murderer. When Katie turns up missing after a runaround with her teacher/lover gone awry, her friends start disappearing one by one, targeted by the released killer in order to keep his student-banging brother out of jail.

The primary way in which "The Absent" fails is that there is way too much going on at any given time. Throughout the film's running time, the viewer is expected to learn a dozen names, differentiate between a number of generic blondes, and keep track of an endless number of familial/friendly/coital relationships that don't contribute to the film in any measurable way. Despite numerous attempts to build a back story and to connect each character to the other characters in the film, I found it very hard to muster any sympathy for any of them or find a single aspect that I could relate too. As with most high school horror films, there is plenty of bed play, lots of forced dialog, and the obligatory "go to the principals office and tell the police officer where you were that night" scene. Despite its wacky trappings, there is little amusement to be had as "The Absent" is generally humorless, and plays its absurd premise very down-the-middle. Looking back, I'm finding it hard to imagine what part of this movie the director and writers thought would stand out. When you start to notice the constant line-flubs and overall shoddy production quality, it becomes apparent director Sage Bannick doesn't seem to care about this movie himself, which makes this an overall insufferable experience.

As "The Absent" grinds through what seems like an endless array of snooze-worthy kill scenes and begins to wind down, you're left hoping that maybe the ending, despite being "spoiled" in the gargantuan synopsis, might provide a last-minute shock to an exceedingly lifeless experience. As expected, the viewer's hopes for any life are completely dashed as the promised "battle to the end" was so short that I got up to get a glass of water and missed it.

"The Absent" is a film that puts all of its cards out on the table from the get go, and suffers because of it. Although I can usually find something to like about a low budget production like this, this film is so completely devoid of any defining qualities that I can't muster up an excuse to recommend that anyone watch it. Low budget film making is about accentuating your strengths and hiding your weaknesses as much as possible, and I'm thinking that the cast and crew of "The Absent" got that concept completely ass-backwards.