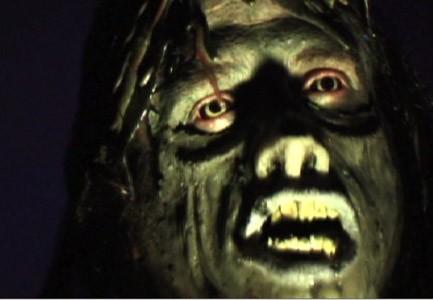 On any normal day, Sarah's a happy little horror nerd, but today she's a bit down. You see, it's her birthday and nobody remembered. What's a sad girl to do on a Friday night when nobody remembered to invite her out for a birthday celebration? Go home and do some karate of course. Fear not though, her friends didn't truly forget. No no, they decided to throw her a surprise Halloween party! The problem is, they decided to hold the party in the Burkitt Manor, the former home of an 1800's steel baron who snapped and mutilated his family.

Low low budget horror often comes and goes but seldom sticks. There's always some good ideas, yet they're always mired in numerous problems; be them plot holes, bad acting or shoddy effects. I'll always give them a fair shake, most of these people are looking for a foothold to get their step up; unfortunately that often bites me in the ass. In the case of "It's My Party", I was quite happy to find myself pleasantly surprised.

"It's My Party" has similar downfalls to others in it's genre; it often feels like you're watching a camcorder recording and sometimes, it's just plain too dark to catch the details of what's going on in the background. These downfalls are trumped though, by decent acting from people most likely not getting paid, highly enjoyable gore effects (when you can see them) and writing that is both entertaining and a fun throw back to the 80's.

The story is straight forward, and there aren't a lot of twists and turns to factor in. People party it up in an old house with a scary little history, people die. In today's trend of twists and surprises it's nice to be able to settle back and turn the brain off, and simply watch a story. At times the movie starts to feel a bit stretched, perhaps a bit slow, but there was always some kind of ghoulie waiting in the wings to jump out and take care of that for you. This makes these slower parts easy to over look. Not to mention that the actors involved, while not top shelf, still turn in a fun performance and help to keep you interested in the antics going on in the house. Throw in a nice cameo from Tom Savini and the cast is rounded off quite nicely.

What proves to be the highlight of 'It's My Party' is the gore effects that they managed to put together on such a small budget. Blood, guts, clots & gouts, they're all there and framed rather nicely. My personal favorite? When old man Beckitt caved in a skull with a meat tenderizer in the opening flash back... that scene made me laugh aloud with a small 'oooo sweet!' muttered under my breath.

Through out the movie, you can see the directors love of the genre and for practical special effects. Shots linger on gooey bits flung here and there, and extra special attention is given to those scenes involving monsters and deaths. I loved that when the revelers show up to get the party started proper, we catch fleeting glimpses of carnage and buckets of blood as viewed from outside the house.

Sure, "It's My Party" isn't a blockbuster. It's a no-budget feature shot on a shoestring and a dream. In the end, it doesn't matter though because they managed to turn that shoestring into an engaging and fun little flick, that is a nice homage and a genre stand out of its own. You'll laugh, you'll cringe, you'll have a good time. Bringing out the nostalgia, because this film reminds me a lot of "Night of the Demons" and that ain't nothing but good.

They'd win a lot more votes if they could use those awesome effects skills to recreate that Linnea Quigley lipstick scene though.