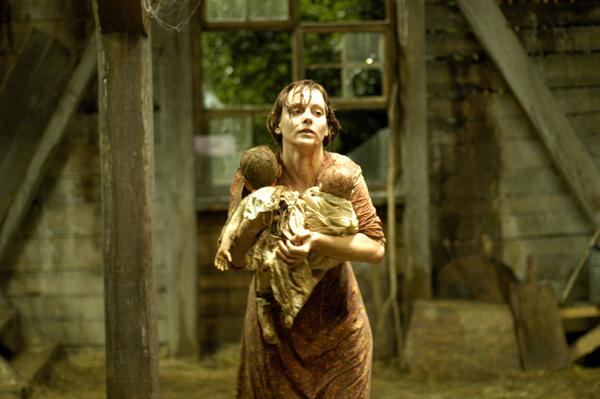 In a way, all ghost stories are time travel stories. In both types of stories, events of the past tend to have ripples which effect the present. Both are also typically structured in the shape of a loop: either the terrible event in the past is righted somehow and the past stays in the past where it belongs or the past succeeds in effecting the present, history is repeated and a whole new set of ripples are sent out.

“The Abandoned” is as good an example as any of a movie in which technically the spook is the unrestful soul of a once-living person, but in a much bigger sense the ghost is the past itself, trying to remake the world into what might have been. By combining past, present and possibility into a twisty Moebius Strip of a movie, “The Abandoned” succeeds in being scary and cerebral at the same time.

The film opens in 1966 Russia with a truck crashing into the front yard of a peasant couple. Behind the wheel is the freshly dead body of a woman who was clearly the victim of a violent attack and in the back are two crying infants. Forty years later one of those infants, now a grown woman named Marie, is searching for the truth about her birth parents and meets with a notary in Russia who claims to have found her childhood home.

After a ride to the house that riffs on the opening chapters of Dracula, Maria finds herself, in the first of many nods to the film’s title and topic, abandoned and
alone in a decrepit, desolate, water-enclosed farmhouse.

Of course, this being a haunted house movie, it’s not long before Maria begins to suspect she’s not as alone as she thinks. A few glimpses of a soaking wet woman leads to Maria being face to face with her own potential future in the form of a milky-eyed, undead doppelganger. In her panicked escape she falls into the river and nearly drowns, only to be rescued by a man named Nicolai who claims to be her brother, also summoned by the notary.

Soon enough, Nicolai’s own bloodied doppelganger appears and the two determine that they have to find a way to escape the house. That’s easier said than done when time continuously folds upon itself as parts of the house morph between present and past and the working truck Maria arrived in shifts into a rusted clunker. The two are separated when Nicolai falls into a hole in the floor that ceases to exist when Maria tries to find him. On her own again, trapped in a house in which past, present and future seem to exist all at once, Maria attempts to piece together what happened in the house when she was a baby and tries to avoid the same fate once again.

I’ve complained about twists in movies so much that I might as well be an outraged conservative parent from the 1950s so it might sound odd that I loved a movie as twisty as “The Abandoned” so much. There’s nothing odd about it, though. “The Abandoned” doesn’t reveal something obvious or implausible in the last ten minutes with the obnoxious “Oh sorry, did I just blow your mind?” attitude that plagues most twist endings. In fact, the twist itself is pretty predictable for anyone with any experience with this kind of story. What’s well done is the way the story is presented. A clue is dropped here and there and the film trusts the audience to fill in the blanks without resorting to too much wordy exposition. The puzzle-like tone is engaging on a story level and the creepy visuals and art direction build an atmosphere that is suitably unsettling and intriguing.

There are only a handful of characters in the movie and the vast majority of screen time is taken up by Anastasia Hille and Karel Roden as Maria and Nicolai. Hille is a mostly unknown stage actress while Roden is a major star in his native Czech Republic but in the US is primarily known as the go to guy for generically Eastern European bad guys, popping up in movies like “Hellboy”, “Blade II” and “The Bourne Supremacy”. Both do a great job of carrying the movie and it’s oddly refreshing to see a modern horror film that not only feels like it was made for adults, but where the two leads look and act like real, slightly haggard middle-aged people.

Smart, engaging, scary horror films often get lost in the shuffle when up against the remakes, extreme violence and novelty that dominate modern horror. While there’s nothing new about the story “The Abandoned” tells, it’s an exceedingly well-told story. In general, the present tends to cannibalize the past when it comes to storytelling of any kind so it is nice to see a movie like “The Abandoned” where the past gets to bite back and gnaw a little flesh of its own.