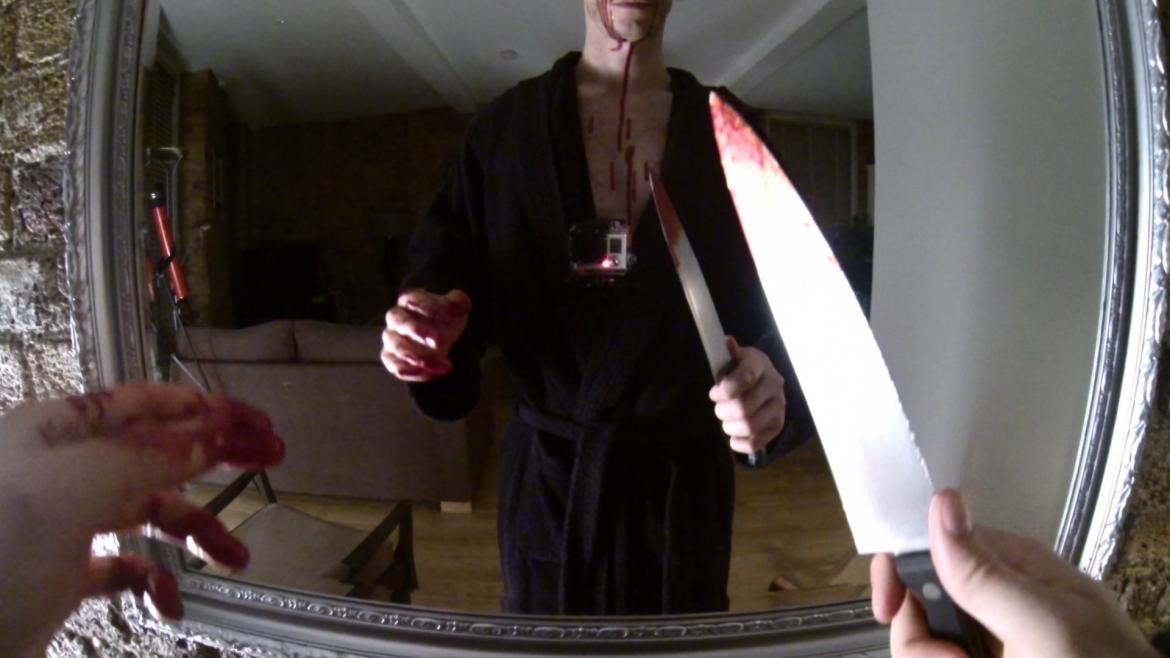 In  world where the Paranormal Activity films never existed, The Mirror might be considered a somewhat entertaining, if plodding, found footage film.

However, we live in a world where the Paranormal Activity films have bludgeoned audiences with the same formula since 2009, and, not counting cute accents,  this English entry adds absolutely nothing you have not seen dozens of times since.

A trio of flatmates order an allegedly cursed mirror of eBay with the homes of documenting supernatural activity and laying claim to a million pound prize offered by a local ghost busting television program. The friends set up static cameras throughout the living room, and when the first night captures Matt standing in a comatose daze in front of the glass, they decide to strap a Go Pro cam to his chest in order to see what other footage might turn up.

We all know where this is headed right? The only possible wrinkle involved in The Mirror is the character of Steven doing his best Ricky Gervais impression and acting like a prattling twat prone to joking a the most inopportune moments. As Matt's behavior grows more erratic, neither he, his girlfriend or Steven act in any way shape or form the way normal humans faced with suspicious circumstances would be expected to. The mirror causes anyone who falls under its sway to gouge out their own eyes, yet Matt seems perfectly capable of navigating the streets of London undetected while having bloody sockets where his eyes once were. Meanwhile, back at the flat Matt's girlfriend and best mate show their concern by filming themselves watching telly and catching up on some sleep. I'll give you three guesses as to how things turn out, and your first two do not count.

Do we need to say more about this movie or can we just move on now? Fine. It's a derivative and uninteresting piece of drivel made my folks hoping to "cash in" on the found footage phenomenon before the last dollar of profit is squeeze dried out of it. There's no reason to watch this movie unless you really hate yourself, and even then maybe your time would be better suite dreading up on self-help and positive reinforcement books.