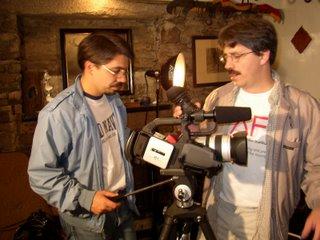 Most horror fans have been there before: you're walking through your local video store, looking for a movie to watch when all of a sudden something awesome catches your attention. Whether it's a movie with a terrible pun for a title, a movie about some freakishly large killer animals or something completely absurd and starring a washed up ‘80s pop-star, once your eyes hit that movie you know that there's nothing else you can possibly watch that night. Unfortunately, as more and more local video stores go under, this experience is becoming less and less common. While some people fear that the next generation won’t know what it’s like to have a functioning economy, fossil fuels or national security, the thing that keeps me up at night is the possibility that my son might not know the joy of stumbling across something like Troll 2 and awkwardly trying to convince the girl he has a crush on that it’s worth watching with him, weirding her out and then never speaking to her again. It’s what made me what I am today.

Luckily for that theoretical future son, Netflix’s Instant Stream is beginning to slowly fill up with some of these movies. I recently had some friends over for my monthly Bad Movie Night when we stumbled across the movie Terror House. We knew what we were watching that night. Fortunately for us, Terror House delivered exactly what we wanted: terrible acting (I really can’t stress enough how hilariously bad it is), cheesy special effects and moments so absurd that none of us could stop laughing. I’ll be up front with this, this movie is terrible. If you’re looking for a piece of art that will make you think, this isn’t your movie. Don’t even attempt to watch it. But if you’re looking for brainless fun, this is the movie for you.

The plot is absolutely absurd. Two brothers, Nelson and Bucky Platt, and their friend, Crawford Tillingast (fans of horror literature might recognize that name from HP Lovecraft’s From Beyond), receive a random letter in the mail inviting them to a house in the suburbs for the evening. The letter promises them all $25,000 each in exchange for spending the night with and interviewing some “regular college students” for an upcoming book. Why who’s writing this book about what three average schlubs from Pennsylvania think about regular college students? Why the richest billionaire in the world, who also runs the world’s largest pharmaceutical company, of course! Who else would write that book?

The three head to the house (a house that is described as being “super creepy” despite the fact it looks like a typical model home you’d see in a new sub-division) and find that the world’s richest billionaire has left them a sketchy bottle of what looks to be Czechoslovakian hobo-wine and that "regular college students" are nowhere in sight. The three drink the wine and promptly pass out. While passed out, a monster that lives in the basement (a finished basement mind you), manages to brick and mortar up all the doors and windows in the house, trapping the three inside. How’d the monster get back into the house after bricking it up? Who taught the monster masonry? Is he union? Why don’t the neighbors in this subdivision notice the hairy werewolf-looking-motherfucker that keeps bricking up the neighbors house and call the cops?

This is all within the first 20 minutes, so don’t feel like I’ve ruined everything. I could keep going on about the sheer absurdity of this movie, but if I haven’t made you want to check it out after that, there’s nothing I can say to convince you that you have to see this movie. I will say, as absurd as it is, I think I know what the writer was going for.

The plot, as batshit insane as it is, reminds me a lot of amateur HP Lovecraft fan-fiction. All the needed parts are there; there’s the mysterious noble figure with the sketchy past (the billionaire), the first-person narrative of someone being driven insane by the monster (a diary belonging to a former resident of the house), the un-imaginable terror (the monster in the basement) and the dark secret (which I won’t spoil, but it’s pretty obvious); really the only thing it’s missing is Cthulu and some awful racism. I will say, the movie failed at having a cohesive plot, but it is interesting and refreshing to see film-makers attempting to make a Lovecraftian horror film based around some of his non-Cthulu mythos related material and style.

I do have to bring up one thing. There is a scene in the movie (the aforementioned diary scene), where the movie gets super repetitive. It’s a temporary lull and is instantly redeemed by one of the dumbest, most obvious comments I’ve heard, but for a while it does get pretty difficult to keep going. Outside of that though, this is a non-stop laugh-fest.

When it comes down to it, what you’re going to get out of this movie all comes down to how much you like crappy horror movies. If you’re looking for something that will make you think, or something that will scare the pants off you, look elsewhere (maybe read From Beyond). If you’re looking for a movie to put on while you’re shooting the shit with your friends and drinking, this is the movie for you. Just make sure to have some paper towels handy. There’s a good chance someone will do a spit-take at some point. You’ve been warned.

Poultrygeist: Night of the Chicken Dead