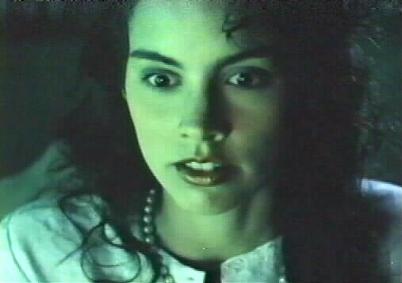 If an award for "The Most Pointless Technical Jargon in a Motion Picture" is ever given out, I hope the committee seriously considers writer/director Bruce R. Cook's impossibly silly 1989 sci-fi/horror outing "Nightwish" for such an honor. Never in all of my years of cinematic abuse have I encountered a movie that features more quasi-scientific babble than actual plot-driven dialogue. It would make for an interesting drinking game, I suppose, though I think you and your entire entourage would be completely hammered by the ten-minute mark. Then again, maybe this is for the better.

"Nightwish" is certainly an ambitious production. It stuffs an enormous amount of goofy ideas and silly theories into its slim 90-minute frame while, at the same time, providing enough genre-related elements to qualify as a functional horror picture. Of course, you'll have to wait quite a while for anything remotely interesting to happen, but the inherent cheesiness of the picture is enough to warrant your complete and undivided attention. The whole thing is comparable to an overlong episode of "The X-Files" without Chris Carter's penchant for sly humor. It's amazing what a few well-placed chuckles can achieve.

Specifically, the film chronicles the exploits of several parapsychology students as they venture mindlessly towards an abandon mansion situated in the middle of a rural wasteland teeming with mentally-challenged locals and a bevy of mutated animals. Their professor -- a seriously devious man who appears to be an alumni of the Christopher Lee School of Cinematic Intimidation -- begins their research by tricking them with a cheap high school "smoke and mirrors" show, an event which leaves his students more than a little irritated. How me managed to incorporate an animated snake into his routine, I'm afraid, remains a mystery. It's still pretty cool, though.

Although their faith in this lunatic is somewhat shaken, this gaggle of would-be scientists stupidly subject themselves to further torture by allowing this nefarious professor to chain them up in the mansion's dank, dark basement. The purpose of the restraints, he claims, is to prevent the group from harming themselves and the entity he's attempting to make contact with. Unfortunately, this is just another sick game perpetrated by a calculated madman, and before you can scream "Altered States," the students find themselves in a nightmarish world where nothing is what it appears to be.

"Nightwish" is packed to the proverbial rafters with all sorts of kooky ideas, from body-stealing aliens to flesh-eating zombies. If you're savvy enough to pick up on clues delivered during the opening sequence, chances are you'll have this bizarre puzzle figured out by the time it's groan-inducing finale comes barreling towards the screen. Bruce Cook does an admirable job of executing these admittedly silly concepts, though he ultimately bites off more than he could ever hope to chew. Had he reigned in the absurdity just a bit, the film may not feel as cluttered and scattershot as it does. That being said, you won't have a problem forgiving the picture its shortcomings once Brian Thompson starts chewing scenery. Хотите провести интересно свой вечер, тогда посетите наш портал в котором вы можете смотреть онлайн трансляции девушек из России и стран СНГ. Без регистрации вы можете общаться с девушками, наш сайт похож по принципу Чат Рулетка, полностью анонимный и самое главное популярный. Не забудьте добавить наш сайт в закладки и тогда вы сможете без труда найти наш портал.

Let face it: Fans of insanely cheesy cinema are going to adore "Nightwish". It's self-importance is often more amusing than the storyline itself, and the plethora of drama club acting is filled with quotable material. As it goes with films of this nature, only a select handful are going to appreciate Bruce Cook's gory sci-fi horror flick, and half of them are going to be highly irritated by the film's insanely lazy finale. If you're willing to accept the film for what it's worth, then "Nightwish" is ready and willing to satisfy your cheap B-grade urges. Good thing I'm a cheap date.