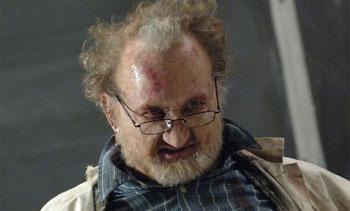 Jack Brooks is a down to earth twenty something, working as a plumber by day and science student by night. Jack’s got some anger issues though; when he was a young boy he watched his family become monster chow to some random creature that stumbled upon their campsite. Since then he’s never been able to forgive himself for being the only one left alive. Cut to the present, he’s feeling lost and aimless and taking college courses only because his girlfriend made him. All of that suddenly changes however when Jack’s science professor uncovers an ancient curse buried in his back yard.

As seen in the synopsis above, "Jack Brooks" is a movie that contains so much promise in nothing but a blurb and a movie poster. Rednecks fighting monsters left and right, Robert Englund… it can’t help but be a grade A flick. A movie I’ve looked forward to for many months, what I found was a movie with great elements but an unhappy finish over all.

There are many high points to "Jack Brooks"; Robert Englund steals the show as he waxes demonic, Jack's rants to his therapist are laugh out loud funny. The only problem is the fluff that lands in between these scenes. A serious edit would work wonders here and a rewrite would take it over the top. When I see the poster above and read the title "Jack Brooks: Monster Slayer" I expect to see just that; a badass dude slaying the shit out of some monsters. Instead I get to see him fight a handful of monsters (4 to be exact) and teases to more fights to come. Those cool bits are mixed in with some long and drawn out character development scenes that simply did not need to be there, and this one rolled in as a pretty big disappointment.

All this is not to say that I hated the movie however. While my high expectations were dashed there was still a lot to like. As Eric mentions in Episode 21 of the Bloody Good Podcast, this movie makes a great origin story in the vein of comic books and super heros. There’s potential here for a franchise, they just haven’t fully realized it yet.

One of the biggest aspects of "Jack Brooks" that needs a mention are the creature effects throughout the movie. There’s no CGI in here folks. Nice throwbacks to the days of old, your monsters here are rubber and make up and that’s a nice change to today’s computer laden bad guys. When you see victims standing about holding rubber tentacles to their necks, it doesn’t look real but it gives the movie a nice nostalgic effect and adds to the camp factor.

‘Jack Brooks’ is not the next juggernaut film franchise to sneak in from the shadows but it’s pointed in the right direction. You will indeed laugh your ass off at Robert Englund’s antics, but you’re going to have to work a bit to get through the slow and boring dialog contained within. Don’t let that scare you away though. It’s a fun watch once you get to the good parts.