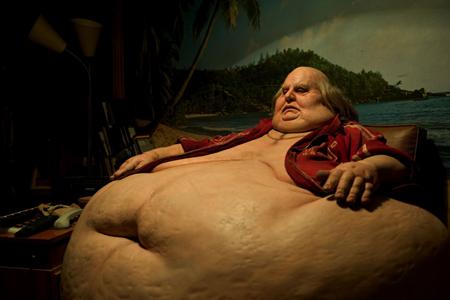 On a scale of disgusting cinema ranging from the pie-eating contest in “Stand By Me” to “Salo” (the most disgusting of all possible films), “Taxidermia”, by Hungarian director Gyorgy Palfi has earned a place somewhere between John Waters and G.G. Allin. Even the most desensitized surfer of the darkest corners of the internet will probably find themselves squirming at some of the scenes of gore and bodily fluids contained in this film, but somewhere beneath the puke and entrails and armpit hair there's a kind of grotesque beauty to be found.

“Taxidermia” mercifully plays out almost like an anthology film. If any of the three segments were expanded to feature length they would be insufferable, and in fact, halfway through the first segment I was preparing myself for a very unpleasant experience. At about the thirty minute mark I was relieved to see the fire-spurting penises and hairlips of the first part gave way to the gorging and puking of the second part. Yep, it's that kind of movie.

The story of Taxidermia, as it were, is that of three generations of Hungarian men. The first segment follows a low-ranking member of the military at a remote outpost during World War II. The soldier is basically an errand boy for the only other people at the outpost: his superior officer, the officer's obese wife and his two nubile teenage daughters. When not chopping wood or being lectured to, the soldier occupies himself by spying on, fantasizing about and masturbating to the two teenagers. He also has a harelip and can shoot fire out of his penis. Don't ask. One night he has sex with the officer's obese wife on top of the carcass of a slaughtered pig. The officer catches him in a compromising situation and blows his head off, but not before he manages to impregnate the wife with a baby that, nine months later, turns out to be some sort of man-pig hybrid complete with a vestigial tail to be snipped off in yet another squirm-tastic scene.

We now move forward in the life of Kalman, the man-pig, who has grown to be one of the greatest competition speed-eaters in Soviet-era Hungary. In the film, speed-eating (and the subsequent vomiting) is a source of great national pride for Hungarians and, in a love story worthy of a bizzaro-world version of the kind of human interest piece played ad nauseum during the Olympics, Kalman falls in love and marries the female speed-eating champ.

This marriage produces the third generation of this family tree of freaks, a corpse-like taxidermist whose skinniness is a great shame for his father, who has swelled up from his already impressive Cold War-era girth to a modern-day size rivaling Mr. Creosote from Monty Python's "The Meaning of Life". The tensions between father and son build until reaching a climax that isn't exactly hard to see coming from a grotesque film called “Taxidermia”, but is effectively done, nonetheless.

“Taxidermia” is not a film for everyone. Mainstream audiences probably won't be able to stomach the repulsive imagery, and Palfi takes disgusting so far beyond gore or body horror that even seasoned viscera-hounds might find something in the film that makes them flinch. That said, even the most revolting scenes are gorgeously and lovingly shot with cinematography that somehow finds beauty where it normally wouldn't, and shouldn't, be. It might take a strong stomach and a sense of humor, but there is a lot to like in this film. Just don't watch it over dinner.