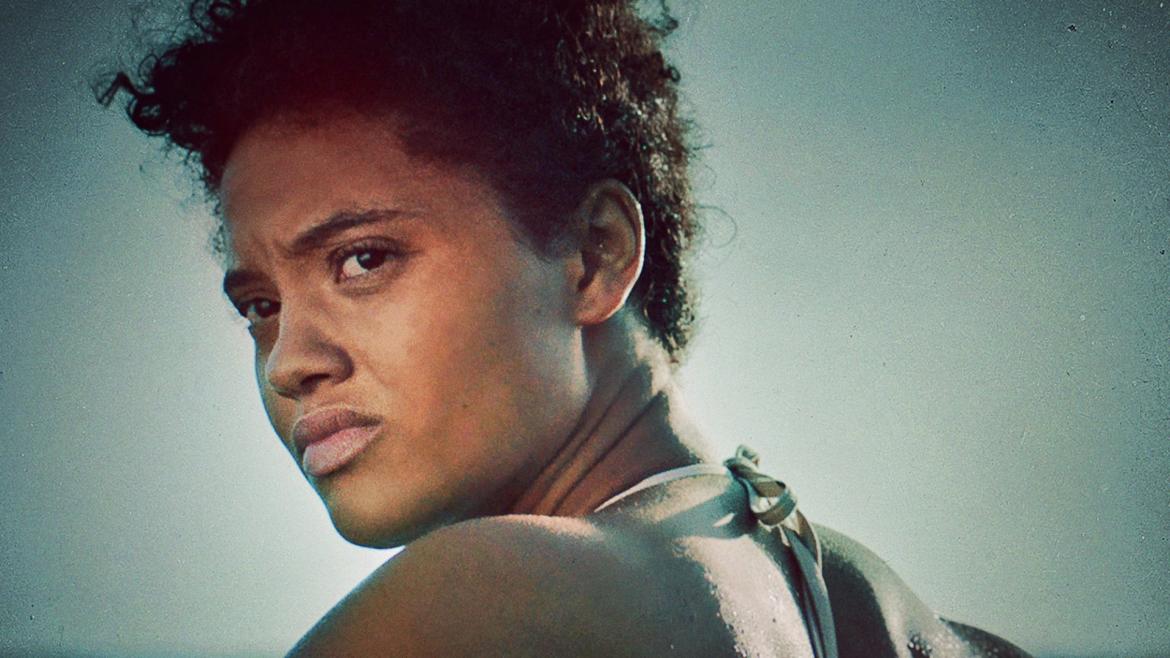 Fans of the genre may recognize Kiersey Clemons from the regrettable Flatliners remake from 2017. If that is your reference point you might be initially skeptical of Blumhouse’s new straight to VOD flick, Sweetheart. Ms. Clemons has, however, had impressive and heartfelt turns in several other films such as Hearts Beat Loud and Dope. Now with Sweetheart Clemons is on her way to becoming a name to watch.

Before we go any further, Sweetheart is a fun movie, and worth a watch, but the experience might be improved by knowing less about what you’re getting into. In order to have the most basic of conversations about the film, we are going to have to spoil at least one thing. So if you’re planning to watch this movie, go do it! This review will still be here when you come back.

Sweetheart centers around a young woman named Jenn (Clemons) who wakes up stranded on a remote, tropical island. She spots her friend lying further down the beach, but he has sustained an injury and succumbs to it shortly after Jenn finds him. She buries him and sets about trying to survive.

From the start, Jenn is a competent and level-headed protagonist and it is refreshing to see a female character who is capable and a movie that doesn’t feel the need to give her a reason to be so. If the elements were all that Jenn had to contend with that would be enough, but unfortunately for her, she’s not as alone as she thought. Something exhumes her friend’s body, leaving a bloody trail down to the water. The next night, as she tries to sleep, she sees a monster emerge from the sea. Every day she tries to survive the elements, and every night she tries to survive a monster.

The monster is both the strength and the weakness of the film. Inventing a creature that invokes terror is not as easy as you might imagine. Far too many films have tried and failed. Director and co-writer J.D. Dillard (Sleight) draws out the suspense by showing very little of the monster at first. When Jenn encounters it, we see it silhouetted in moonlight or in quick, close cuts that only show us glances of the beast. As the movie progresses, we see more and more of the monster until we see a few full shots of it.

Perhaps one of the most interesting elements of Sweetheart is its title. For the majority of the film, we don’t know Jenn’s name. We only learn it after her boyfriend and another young woman wash up in an evacuation raft. She tries to warn her friends about the monster, but they don’t believe her. They treat her like she’s insane. When Jenn tries to make a break for it, they attack her and tie her to a tree, not knowing what a catastrophic mistake this is. It is in one of these confrontational scenes that Jenn’s boyfriend refers to her as “sweetheart.” It is a throwaway line that happens so quickly that many viewers may not clock it at all. Some, however, will feel that word deep in their gut, like a punch. That one word breaks her down, threatening to invalidate everything she has experienced. It dehumanizes her, and seeks to remove her agency. Jenn will not be ignored, though. She is nobody’s sweetheart, and she’s not going down without a fight.

Kiersey Clemons's performance is grounded in reality and incredibly heartfelt. We are with her from moment one and the movie's pacing allows us to follow her as she tries to survive the days and nights. As VOD films go, this one is a pretty solid choice. This reviewer was certainly left wondering how it was that this film didn't get a theatrical release when some other, shall we say, less interesting Blumhouse joints get a nice long run in theaters. Give Sweetheart some love and check it out today!