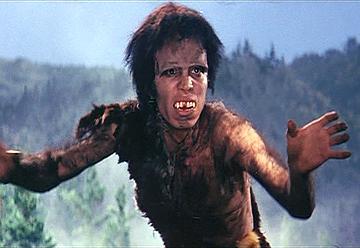 “They Saved Hitler’s Brain” is a made for TV masterpiece from 1966. Well, actually it’s a titular masterpiece that was originally a 1963 theatrical release under the much less appealing name, “The Madmen of Mandoras”. Anyway, in the film, the Fuhrer’s head is kept alive on a remote South American island so that the 1000 year Reich might rise again. It’s not a hugely entertaining or memorable movie but odds are if you are genre film fan the title is familiar to you. What you may not know is that around the same time that American TV producers were refashioning their tale of a fictional Latin American country saving Adolph’s nugget, Japanese filmmakers had their own idea about what the flagging Nazi regime’s most valuable export might be. Eva Braun’s bra? Goebbels’s gonads? Max Schmeling’s chin, you say? Those are mere trifles compared to what the Germans send submarining to their Rising Sun allies at the beginning of “Frankenstein Conquers the World”. That’s right its Frankenstein’s beating heart, German national treasure and object of great value that was of no use to them at Stalingrad, Kursk, or Berlin.

According to the Germans, Frankenstein’s heart can never die and during the first week with its new Asian owner’s this idea is put to the test. Poor Frank, his ticker gets transferred to a medical research facility in Hiroshima… in August… of 1945, a scant few days before Fat Man decimated the city and its people.

15 years after the heart is hit by a 20 kiloton nuclear bomb, a group of researchers at the International Institute of Radiotherapentics have their dinner interrupted when a young deformed boy is hit by a taxi on the street below their apartment. They throw a bag of crackers at the mutant kid and he scurries off. Incidents of rabbit mutilation, chicken rustling and unsuccessful taxi dodging skyrocket in the neighborhood and eventually wee Frankenstein is flushed out and taken into the lab by our band of three scientists. They make several discoveries during the boy’s stay at the institute including that he is Caucasian ( more specifically of German origin), though as a casual observer I am not sure they cast the right actor to bring that plot-point off, as he still looks mighty Asian to me. Perhaps more important is that the kid is radioactive and he is growing at an accelerated rate. Little Frankie eventually grows into a 20 foot tween and breaks out of his cell following a dispute over the integrity of the media.

The overgrown middle-schooler stomps off to the foothills of the Japanese Alps in hopes of being left alone. In any other country this would be a reasonable plan, but Japan of the 1960’s suffered through one of history’s most costly outbreaks of BMV (Big Monster Violence). Just as little-big Frank is trying to go underground another monster is literally digging his way out from a subterranean cave to torment the countryside. Baragon, which sounds like an off-brand home enema kit, is an insatiable horse and pig eater who smashes up houses then digs back into the ground and hides. Of course the locals manage to miss seeing the 40 foot monster during these rampages and decide to blame the whole thing on Frankenstein.

The scientists go to find Frankenstein to try and protect him from popular opinion but instead they just force him into a fight with Baragon in order to save their lives. Faster than you can say ‘hasty wrap-up’ a giant forest fire breaks out, Frank vanquishes one monster and a second appears out of an ocean that is located within a few hundred yards of the Japanese Alps.

Let me just say that there are a few things that really shake your faith in the scientists acting on Frankenstein’s behalf. Principally, they seem to have a penchant for overstating the obvious, detailing the self-evident, and creating an A-HA! moment when everyone else in the scene is content to let the readily apparent conclusion speak for itself. If these aren’t reasons enough then I submit one more stand alone quote for your consideration, this from leading Frankensteinologist Dr Yuzo Kawaji.
“Is it cold in the Japanese Alps?”

There is enough humor and some well crafted poignancy to make this movie work. Sadly the pacing is deplorable, the action clumsy and the second act devoid of monster activity. When the destruction and mayhem arrive it is a low grade fever; with fight scenes that have the strange aroma of afterthought wafting through them. The movie maybe a curiosity for those who appreciated its loose follow-up, “War of the Gargantuas” but otherwise it really is a lesser daikaiju film. Perhaps if Frankenstein’s heart, Hitler’s Brain, Braun’s bra, Schmeling’s jaw and Goebbels’s balls had all fused into one fiend we’d have had a more interesting second act and a better picture overall, as it stands it’s monstrously dull.