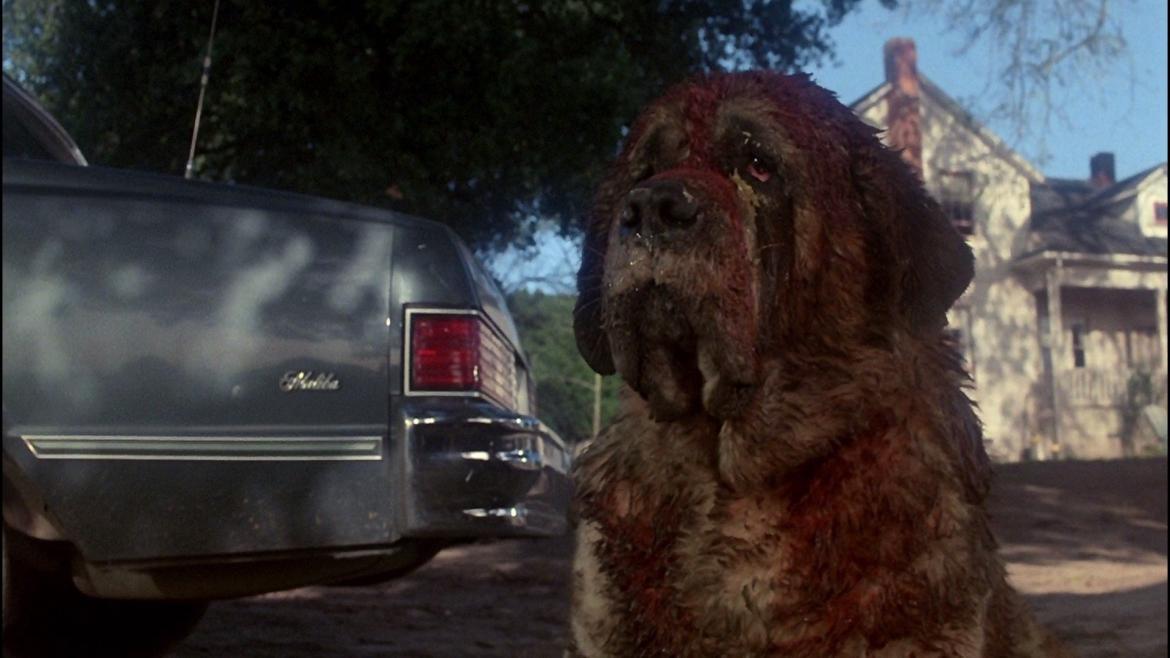 Cujo is the story of a good dog gone bad. Instead of falling in with the wrong crowd, staying out late, and getting into rumbles, Cujo is bitten by a bat and contracts rabies. This transforms Cujo from a big, fluffy, cuddly St. Bernard into a slobbering killing machine who, if we’re being honest here, is still a little cuddly. Of course, a mom (Dee Wallace) and her young son, Tadd (Danny Pintauro), who get stranded near Cujo’s house and whom he torments relentlessly for the movie's final half may disagree with that assessment.

Admittedly, Cujo is kind of a hard movie to watch if you’re an animal person. Cujo is a victim of bad luck with the bat and bad owners who, for various half-explored reasons, aren’t exactly attentive. They allow Cujo to turn into a monster, driven by a rage he can’t control or understand. With a little tweaking, Cujo could work as a pretty effective tragedy. In its present state, the move allows Cujo to become a stereotypical horror villain. He miraculously appears unnoticed behind his victims, he’s able to withstand quite a lot of punishment, and, just when you think he’s dead, there he is coming back for more.

It doesn’t help that the movie doesn’t know what to do with the humans surrounding Cujo. Let’s put aside the fact that Tadd is a highly-grating creation and focus on his mom. At points, the movie paints her as trapped in a loveless marriage, one that’s being held together exclusively by Tadd’s existence. Then, we waffle back to everything being great and her affair with a local stud is treated as a mere indiscretion rather than a symptom of a bigger problem.

The character of Joe Camber (Ed Lauter), Cujo’s owner, is another mess. Camber isn’t so much a real character as he is whatever the plot needs him to be. He’s the only honest, trustworthy mechanic in town and he is also a drunk, negligent, and possibly abusive husband and father. While being honest and being a dick aren’t mutually exclusive, we don’t spend enough time with Camber to learn what connects these disparate character traits. He’s simply used as the reason the mom and Tadd are there when Cujo snaps and the reason why no one is around to save them.

Heck, Cujo can’t even decide if Tadd’s father is a gearhead or not. All of this is confusing and it feels like stalling. The movie runs 90 minutes and it’s almost 45 minutes in before Cujo kills anyone. Patience is fine, but you need to do something of value with those 45 minutes of buildup, like give your characters and their relationships some substance.

Cujo isn’t all bad. Dee Wallace gives a solid performance as the mother in peril and there are some scattered moments of tension once Cujo starts his rampage. When looked at as a whole, however, Cujo feels like a too-long B-monster or slasher movie masquerading as something deeper.