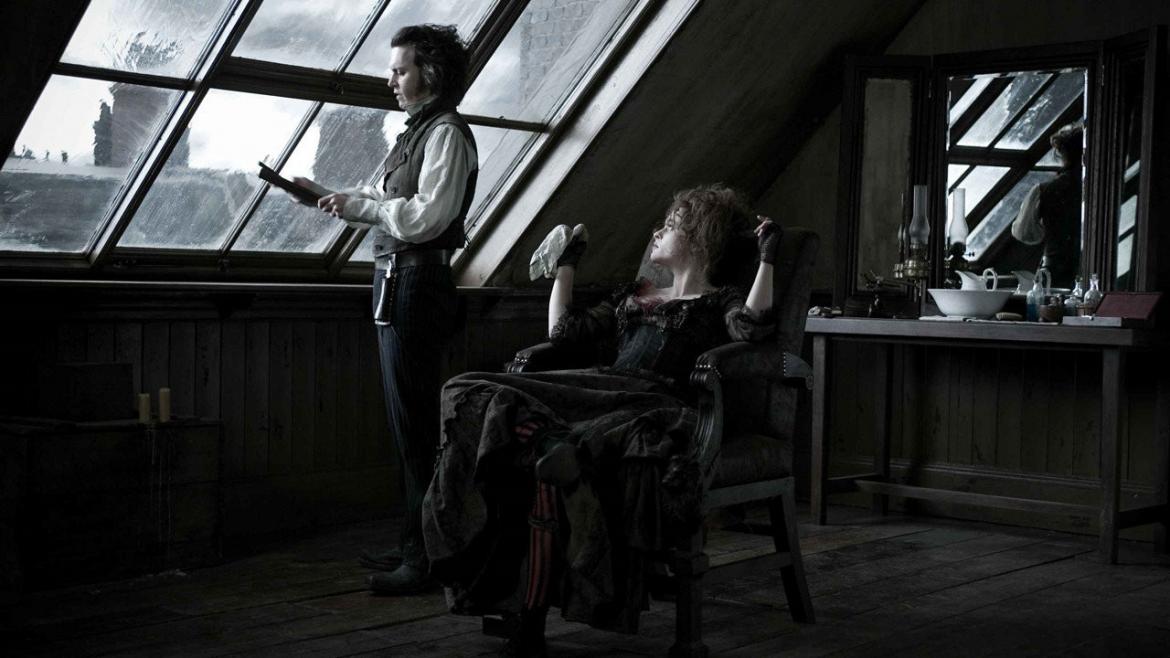 To call “Sweeny Todd: The Demon Barber of Fleet Street” the finest horror film of the year may be a disservice to both the film and the horror genre. “Todd” — which feels as if it sprang forth, fully realized, from the twisted psyche of Tim Burton — is a terrific film, a musical wearing horror’s clothing. It trades in the vilest of our cultural conventions, and bathes the viewer in rivers of blood. Truly, “Todd” can horrify, but “Hostel 2” and “Halloween” (two of this year’s most high profile horror films) it is not. Like past horror films that have transcended the genre, “Sweeny Todd” does so by both leveraging and subverting our generic expectations, and in the process exposes a raw sliver of the human experience.

The legend of Sweeney Todd is an old one, dating from as early as the mid-19th century, and various storytellers have imagined it in different ways. Few however, could be as perfect a match as Tim Burton. Working from the musical scripted for the stage by Stephen Sondheim in 1979 and adapted here by John Logan, Burton crafted a film that harkens back to his best-loved works. Equal parts bombastic, contemplative, dark, and witty, “Sweeney Todd” is as ambitious an undertaking as Burton could have asked for, and its success is nothing if not a confirmation of its director’s ability.

Todd, the legend, centers on a demon barber, one of the oldest and most popular of serial killer myths. Sweeney, working in concert with his partner Mrs. Lovett, uses his shaving razor to dispatch of select patrons who then become the filling for Mrs. Lovett’s meat pies. In Sondheim’s musical, and thus the film, Sweeney is driven by revenge. Having been imprisoned by the covetous Judge Turpin who has eyes for Todd’s beautiful wife, Sweeney returns to London 15 years later to seek retribution from those destroyed his idyllic life.

I can guarantee the closest shave you'll ever know.

As it always must, Todd’s desire for revenge proves to be his Achilles heel. His quest sends him spiraling ever more out of control as the bodies begin to mount and Mrs. Lovett’s pies become the talk of the town. There’s a love story here too, involving Todd’s teenage daughter who has become a ward of Judge Turpin and a young sailor Sweeney met on his travels. In its original stage instantiation this courtship shared nearly equal time with the slow descent of the Demon Barber, but here Burton seems content to give the budding relationship only as much time as necessary to move the plot along.

This decision, to deemphasize the redemptive elements of the plot, is one of “Sweeney Todd’s” few weaknesses. And even that may be too harsh an assessment, for Burton chooses instead to delve deeper into the unraveling of his title character, which ultimately serves to draw the film further into the realm of horror. Depp, as he so often does, throws himself head first into the role, and his dedication and fearlessness in embracing the darkness lifts what might otherwise have been a quotidian musical into truly rarefied air.

Under Burton’s hand, “Sweeney Todd” has swelled to a story of grand parable. With the love story thrust to the back, Sweeney’s crusade becomes a metaphor for the class struggles of early industrial era London. Lovett, who views herself as a loser in the economic battleground, bends Todd’s vengeful ways to her benefit as she makes use of the surfeit of cheap meat being slaughtered in Todd’s barber chair. As the pair sing in “A Little Priest,” a song that normally plays directly before intermission, “How gratifying for once to know/That those up above will feed those down below.” Even as he grows ever madder, Todd’s murderous blade dispatches only with his upper-crust clientèle. It is only when he violates this self-made boundary, and kills a beggar woman who has wandered into his shop, that Todd opens himself up to retribution and eventually destruction.

Burton and Depp turned Todd into the traditional horror monster, a force that kills according to its own, disruptive ideology. Because we understand Todd’s motivations we are complicit and even supportive in his journey. But as Burton knows, once the code is broken, the monster must be destroyed so that order may return.

In “Sweeney Todd,” Burton subverts horror conventions by allowing us to see behind the monster’s mask (a move akin to “Friday the 13th“ being told from Jason’s perspective). But the film truly succeeds by reverting to type and embracing its generic roots. Only in Todd’s demise can we leave the theater cleansed. Burton leads us into the darkness, but also leads us out again: his film succeeding as horror, but also as something beyond genre. It is both a testament to horror’s grandest ambitions, and an example of the rare success found by reaching past convention.

Movies Like Sweeney Todd: The Demon Barber of Fleet Street