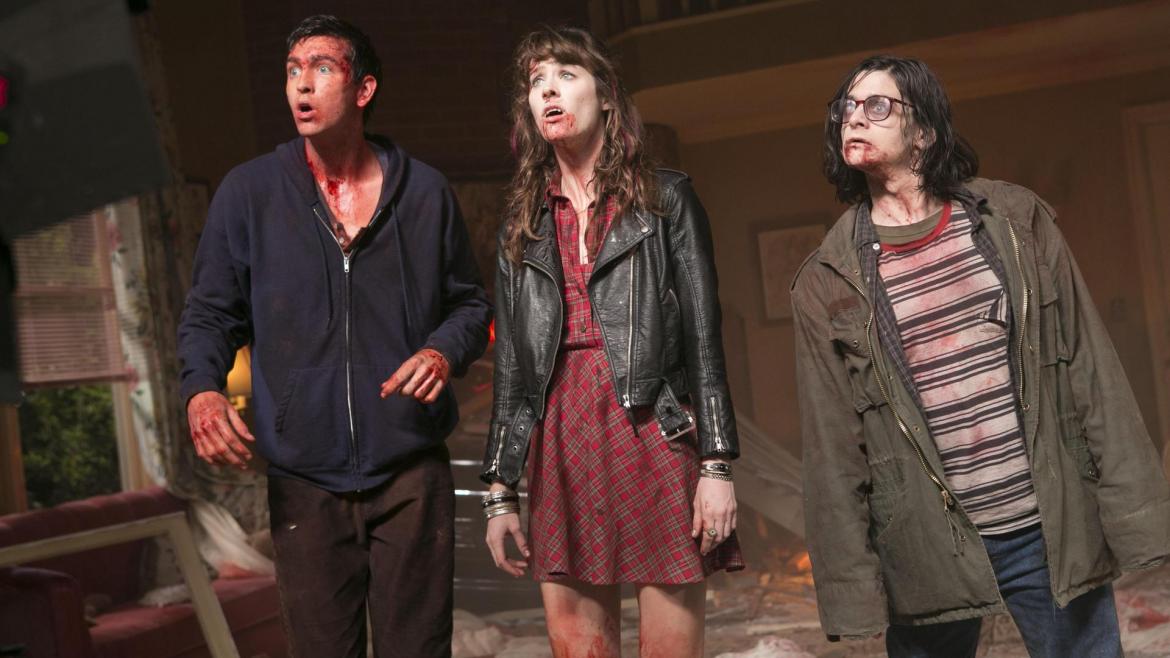 There’s been much speculation amongst the BGH community of what exactly Spooky School would look like. Now my friends, Robbie Pickering’s Freaks of Nature has given us our answer.

Dillford, Ohio is like most movie depictions of small town USA, with the exception that all its residents are humans, vampires, or zombies employed by an industrialist who runs the town’s economic engine by producing a fast food object known as the “riblet”. Shock collars and readily available Blood Capri Suns allow the population to live in tenuous harmony. But with the sudden arrival of invaders from outer space Dillford is thrown into panic and fear mongering between the town’s factions.

A trio of high school students emerges from the ashes of the impending apocalypse. Dag (Nicholas Bourne) is an aspiring jock looking to break into the popular crowd. Petra (Mackenzie Davis) is a newly turned vampire who made a hasty decision under pressure of the school’s bad boy vamp. And there’s Ned (Josh Fadem), an intelligent outsider who chooses zombism to escape the psychological strains of constant bullying. With Dag at the helm, the group sets out on a quest to figure out what these aliens want and to reunite the citizens of Dillford.

Freaks of Nature exudes a certain cartoon, 80s callback charm in its combination of high school movie tropes as filtered through a Spooky School setup. It’s a feather-light piece of “fun” cinema that’s content in being its whacky pastiche self. The film’s management of Dillford’s various populations is light on its feet and thankfully doesn’t get bogged down in developing a grander mythology for its brazenly preposterous world. A wealth of cameos and supporting performances including Joan Cusack, Bob Odenkirk, Patton Oswalt, and Keegan Michael-Key offer some seasoned comedic talent to elevate a few of the more tired scenarios, resulting in some sequences that are more humorous than expected.

But what Freaks of Nature achieves in its cheerful setup and a hefty joke density it lacks in a subversive edge that keeps the material from being more than it’s surface. The film is committed to this high concept setup to a fault, skirting more interesting opportunities for characterizations that go beyond the high school comedy archetypes. It’s sort of like watching a parody film that doesn’t know to skewer its source material. Dag is our de facto “leader” not because he is the most compelling character, that honor could go to Petra if she had more to do, but because he is our white male lead who’s trying to get with the “it” girl. He undergoes an arc we’ve seen in dozens if not hundreds of other films in service of generic conformity.

This is particularly irksome as Petra’s narrative has greater potential for us to sink our teeth into more substantive material (I’m so not sorry for that pun). Petra’s becoming a vampire mirrors incidences of date rape as well as slut shaming. This would be a potentially rich sub text if she wasn’t forced to explicitly state this in a scene that’s mostly about her throwing herself at Dag after she calls him out for participating in similar behavior in thier past. Mackenzie Davis who most audiences know from The Martian and the AMC Halt and Catch Fire brings a strong charisma to a role that’s mostly written in service of Dag’s development, making Petra a character you wish had been the film’s focus from the start.

There’s one of many cameos in Freaks of Nature that is too good to spoil here. It’s an instance that delights in the contrast between a perfectly dry delivery and conflicting visuals. The film takes this cameo and squeezes every bit of humor out of it, widening the gulf between persona and behavior by requiring the performer to become increasingly silly and profane. It’s a goofy and innocuous sequence demonstrative of the best moments of Freaks of Nature. There’s a tangible sense that everyone involved was having a total blast (I mean, how many credit sequences still end with a gag reel?). But it’s also indicative of how shortsighted the film can be, content in substituting this kitchen sink genre content for innovation and meaningful charm.